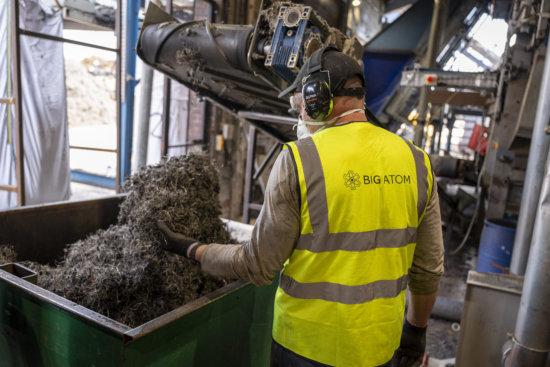 Big Atom founder Alex Guslisty has a goal of bringing an end to waste materials and says the £350,000 grant will bring his vision a step closer (Photo: Big Atom)

Big Atom is celebrating a major breakthrough in its attempt to “revolutionise” the tyre recycling process after receiving a £350,000 grant from Innovate UK. The clean-tech recycling company, which already boasts the North West’s second largest tyre recycling plant, has been given the cash injection to develop its patented chemical reactor technology, which will convert old waste tyres into new materials.

Company founder, Alexander Guslisty, said that the grant would enable the business to develop the concept of a novel pyrolysis reactor with improved temperature control and efficiencies to create an even more sustainable regeneration process for polymers:

“We already recycle tyres and have just processed our one millionth, but this Innovate UK grant will accelerate our tech development and bring us closer to create circular economy for polymers – thus ending the concept of polymer waste.

“It is a huge breakthrough and will open up new opportunities that will accelerate our IP and pathway to commercialisation. What’s more, the process will be good for the environment and support our ultimate goal of bringing an end to waste materials.”

According to the company, Big Atom will continue to shred and granulate tyres providing the feedstock to the pyrolysis reactor to convert them into oil, gas, and recovered carbon black that can be used again and again.

“We will be able to generate higher yields of valuable products compared to existing reactors and ultimately, we’ll be able to produce a more stable and desirable product for refineries to use as their feed”, Alexander Guslisty continued, adding:

“There continues to be a problem with waste travelling thousands of miles on ships which we don’t have control over. This grant puts us a step closer to solving this problem through our closed loop recycling process”.