UK car production fell 41.5 per cent in September, the third consecutive month of decline, with 67,169 cars manufactured – the worst performing September since 1982 – according to the latest figures released this week by the Society of Motor Manufacturers and Traders (SMMT).

Output continues to be hampered by the production stoppages caused by the ongoing global shortage of semiconductors as well as the loss of production capacity arising from the closure of one of the UK’s larger plants. While Wednesday’s Budget confirmed £817 million of funding for the transition in automotive manufacturing and business rate relief on renewable energy, the industry continues to battle against the ongoing effects of the pandemic.

The news comes as SMMT reveals details of its member survey into the impact of the global shortage of semiconductors on the UK automotive sector and its vital supply chain. This indicates that 83 per cent of firms have been negatively impacted by the situation, primarily due to reduced orders, cost increases, logistical delays and disruption.

The supply chain has spent more than £2.4 billion to date managing additional costs which are unlikely to be recovered, 56 per cent not expecting supply constraints to improve until the third quarter of 2022 and 38 per cent having to reduce operating hours to cope with the challenge.

Around one in ten firms have made redundancies and/or restructured their businesses as a direct result of the lack of semiconductors, while 65 per cent of SMEs sought an extension to the Coronavirus Job Retention Schemes, highlighting the fact that, although the pandemic may be receding, its impact on the sector is still pronounced.

Despite the ongoing challenges, production of the latest battery electric (BEV), plug-in hybrid (PHEV) and hybrid (HEV) cars continues to break records, now representing 32.3 per cent of all cars made, equivalent to 21,679 units. It means UK car factories have turned out 158,710 alternatively fuelled cars since January.

Production year-to-date remains marginally up, by 3.8 per cent, with 656,776 cars rolling off factory lines, which has largely been driven by exports with 82.7 per cent of production heading for markets abroad. However, this does not paint the full picture, with the year-to-date total down 33.5 per cent over the 2019 performance and 44.1 per cent – equivalent to 517,438 fewer units – less when compared to the five-year pre-pandemic average.

“The substantial decline in UK car output in September continues the worrying trend we have seen over the past three months,” says Mike Hawes, SMMT chief executive. “The industry is continuing to battle the effects of the pandemic with the shortage of semiconductors stalling production.

“Whilst there was welcome news in the Budget to support the transition to zero emission vehicle production, battery manufacturing and supply chains, it missed the opportunity to offer meaningful short-term support given Covid-related supply constraints and rising energy bills. This is disappointing given the sector’s importance and its ability to create well-paid jobs across the regions and the revenues it generates, notably from exports.” 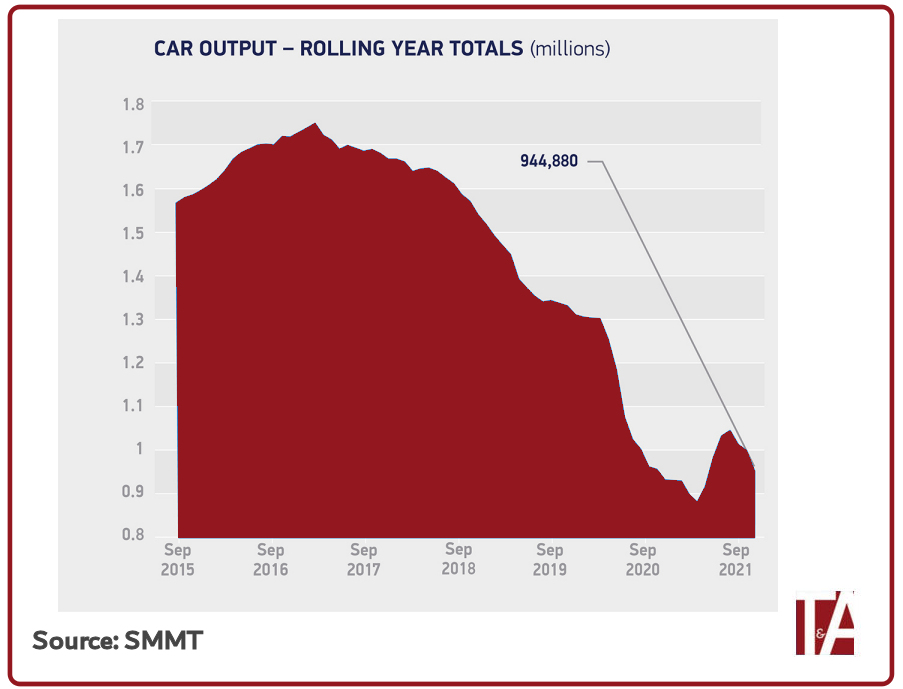