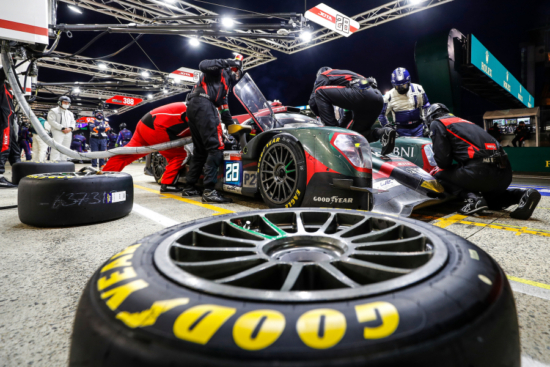 The FIA World Endurance Championship (WEC) season concludes with two consecutive races on the Bahrain International Circuit, and Goodyear says it is looking forward to the challenges that lie ahead in the desert. The circuit layout may be the same, but the different race duration will bring interesting challenges for the LMP2 prototype category teams, all racing on Goodyear tyres.

The different track temperatures and two different race durations will challenge the teams and make them think about different strategies, as explained by Mike McGregor, Goodyear’s endurance programme manager: “Last year, we gave teams the option of two tyre specifications to help them with the temperature transition from desert sunlight into darkness. A 15°C difference in track temperature is possible as night falls. This year, we’ve developed a tyre with a much wider operating window and we will supply this to all LMP2 category teams. It has been proven in the 47c track temperatures of Portimao and the 12c nightime of Le Mans. Compared to these circuits, Bahrain puts more demands on braking and traction. Long straights and heavy braking areas put the focus on longitudinal forces rather than the lateral loads of a classic circuit such as Spa.”

The teams are permitted to use 18 Goodyear slicks during qualifying and race for the first weekend, rising to an allocation of 26 tyres for the second weekend. This gives the teams a few strategic variables to consider as they plan their pitstop strategy for the two events. They are also allowed to use a further 12 tyres in free practice. In the event of desert rain, Goodyear will also have its range of intermediate and wet tyres available.

The twelve-car LMP2 grid features some notable drivers. High Class Racing has confirmed that Robert Kubica will race for the team. At Le Mans, the former F1 driver was leading with Team WRT until a cruel twist of fate saw their car stop on the final lap, leaving their sister car to win the event. Kubica will be keen to end his European Le Mans (ELMS) winning season on a world championship high, joining Anders Fjordbach and Dennis Andersen in the Oreca 07-Gibson.

The WEC class leaders are the Jota Sport team of Stoffel Vandoorne, Sean Gelael and Tom Blomqvist, but with only 13 points covering the top four teams, there’s all to play for. The WEC awards 25 points for a six-hour race win and 38 points for an 8-hour win, so mathematically there’s 23 drivers and eight teams in contention for the overall championship. That underlines how open and intensely competitive the 2021 season has been, helped by WEC choosing Goodyear as the sole tyre supplier for the class,

Goodyear became the exclusive tyre supplier to LMP2 in WEC and ELMS at the start of this season, adding to a proud roster of top class racing series including the WTCR – FIA World Touring Car Cup, PURE ETCR, NASCAR and an array of other championships and classes,

McGregor adds: “We’re delighted with our first year as the sole supplier. Our commitment to WEC and ELMS is underlined by the fact we introduced a completely new slick, intermediate and wet range for this season. The tyre consistency and offering equal service to all teams have contributed to the fierce on-track competition. Few other championships have this many teams in contention with just two rounds remaining.”

The 6 Hours of Bahrain will take place on 30 October, followed a week later by an eight-hour race that will be the 2021 WEC finale. Once the on-track action ends under the Bahrain floodlights, the action continues in the virtual world. Goodyear has been appointed the official tyre partner to the Le Mans Virtual Series. With five rounds and 48 hours of racing building up to the season climax at Birmingham’s Autosport International Show in January, Goodyear’s virtual tyres, based on real-life tyre models, will be raced by every car.