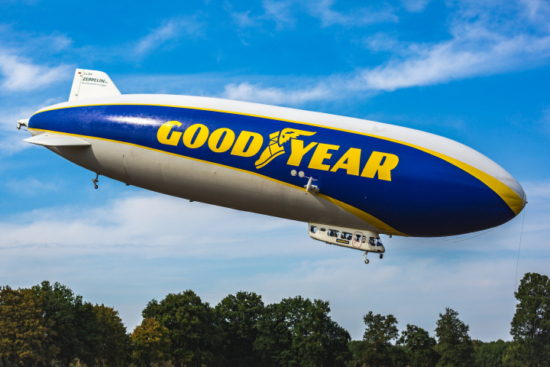 The Goodyear Blimp on its visit to British skies after almost a decade away (Photo: Goodyear)

Fingers crossed for good weather over the Channel and southern England today – the Goodyear Blimp is getting ready to head towards the coast after spending yesterday floating above London. Goodyear has tweeted several spectacular views photographed by the pilot, so it is well worth checking @goodyear_uk for more during the course of today. The Blimp’s progress can be followed on Plane Finder.

It's been an exciting day in London 🤩

We've flown over some iconic landmarks, and seeing all of your pictures has been great 👍🏻

📸 Here are some shots from the Pilot today 🙌 pic.twitter.com/GYcxPUdsy6

In case you were wondering, as we were, what it is like to tour London in a Blimp, the team at Goodyear can confirm that this is “without doubt, the best way to take in the city.” Goodyear asks if it is perhaps time for airship tours to become a regular feature – we’d certainly climb aboard.

The Blimp’s current visit to London and the south of England is the first flight of a Goodyear-liveried airship in our skies since 2012. The craft on tour in 2021 is a Zeppelin NT semi-rigid airship, the largest of its kind in the world today.

Goodyear originally announced that the Blimp would first visit England to cover the British Touring Car Championship (BTCC) action at Brands Hatch last weekend, and it arrived over the circuit at around 1:30pm on Saturday. Poor weather over the Channel forced the Blimp to remain at its base in Calais the following day, but Londoners spotted the familiar shape in their skies for several hours yesterday.