You are here: Home1 / News2 / UK News3 / Cautious recovery in new car registrations during May

Cautious recovery in new car registrations during May 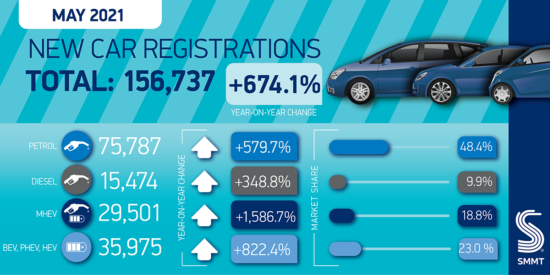 With the year’s first full month of showroom openings, new car registrations in May reached 156,737 units, according to the latest figures from the Society of Motor Manufacturers and Traders (SMMT). The total represents an almost eightfold increase on the same month last year, but is down -14.7 per cent on pre-pandemic May 2019, and -13.2 per cent on the 10-year May average.

Against a more positive economic backdrop – including OECD forecasting a 7.2 per cent increase in UK GDP during 2021 – fleet registrations grew more than twice as fast as private purchases in May. Large fleets accounted for 50.7 per cent of all new vehicles hitting the road, demonstrating improving business confidence compared to the same month last year.

In terms of segments, dual purpose vehicles saw a small decline in market share in the month, down to 26.7 per cent, leapfrogged by lower medium cars which rose to 27.8 per cent. Superminis remained Britain’s most popular car choice, with a 31.1 per cent share.

Battery electric vehicle (BEV) market share declined from 12.0 per cent a year ago to 8.4 per cent in the past month, although the May 2020 performance was distorted by lockdowns when new cars could only be purchased through click and collect or delivery, giving rise to variable purchasing patterns.

Meanwhile, total registrations for 2021 sit at 296,448 fewer units, or -29.1 per cent less, than the average recorded across January to May during the last decade, evidence of the scale of the recovery still needed given the impact of Covid on the market.

Mike Hawes, SMMT Chief Executive, said: “With dealerships back open and a brighter, sunnier, economic outlook, May’s registrations are as good as could reasonably be expected. Increased business confidence is driving the recovery, something that needs to be maintained and translated in private consumer demand as the economy emerges from pandemic support measures.

“Demand for electrified vehicles is helping encourage people into showrooms, but for these technologies to surpass their fossil-fuelled equivalents, a long term strategy for market transition and infrastructure investment is required.”