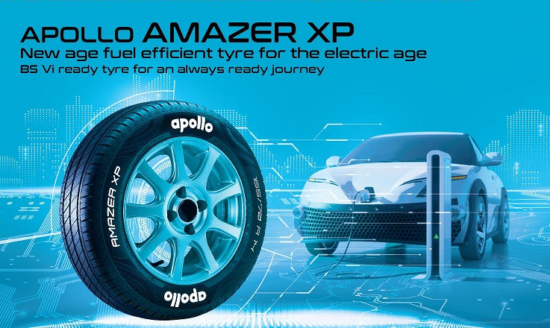 Apollo Tyres has unveiled a new eco-oriented tyre developed by its R&D facilities in Europe and India and offering a “best in class rolling resistance coefficient.” The tyre maker says the Apollo Amazer XP complies with BS VI, India’s equivalent of Euro 6 standards, and is electric vehicle ready. Apollo will initially only sell the Amazer XP range in India, including as an original equipment tyre for several vehicles.

“The Apollo Amazer XP tyres are the new-age fuel-efficient tyres for the electric age, which is BS VI ready,” comments Satish Sharma, president of Apollo Tyres’ Asia Pacific, Middle East & Africa (APMEA) business. “This eco-friendly tyre is another small contribution from us towards a greener and sustainable future. The number of OE fitment approvals that we have received within a short span of time for these tyres, is a testimony to the superb performance one can expect from these tyres. We are already looking at dominating the passenger EV space in India with these tyres.”

Apollo has tooled up its factories in Oragadam, Tamil Nadu and Limda, Gujarat to produce the Apollo Amazer in a launch range of seven sizes, with a further five dimensions scheduled for release at a later date. Apollo Tyres has high hopes for its new tyre: It is targeting the range at a market segment that accounts for around 200,000 tyres a month in India.

Original equipment approvals at the time of the Apollo Amazer XP’s launch include for the Tata Tigor electric vehicle, Renault Kwid, Hyundai Grand i10 and Datsun Go & Go+.