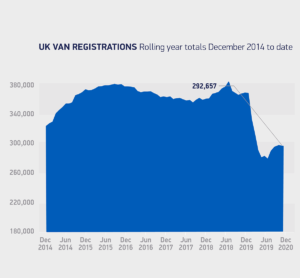 Figures released by the Society of Motor Manufacturers and Traders (SMMT) reveal that UK new light commercial vehicle (LCV) registrations ended 2020 down -20.0 per cent, with the van market rounding off the year in decline following three months of growth. 292,657 vehicles were registered in 2020, as the impact of Covid and uncertainty over the future relationship with the EU brought down demand toward the end of the year, with registrations in the final month of the year dropping -1.0 per cent, albeit with volumes consistent with previous Decembers.

Throughout the year the LCV market responded to fluctuating demand, flexing to adjust as lockdown measures affected consumer behaviour and business operations. The first sub-300,000-unit year since 2013 delivered a shortfall of more than 73,000 with a cost to the sector of some £2 billion in retail value. Despite the sector stepping up to meet demand brought about by the rise of online shopping and corresponding deliveries, the effect of the pandemic on businesses, and thus the wider economy, has subdued overall demand, shrinking the van market by a fifth in 2020.

Mike Hawes, SMMT chief executive, said; “It’s been a truly extraordinary and testing year for the commercial vehicle sector. From keeping services running, to getting key workers, goods and medicines from A to B, manufacturers and operators alike have adapted to multiple unpredictable challenges.

“Undeniably the LCV market, having shrunk by a fifth, has a lot of hurdles to overcome as we enter 2021. However, investment in fleet renewal will be key to driving recovery, and the sector’s resilience, now coupled with added clarity over UK-EU trading relations and the rollout of vaccines, offers hope for both the van market and the wider economy.”

Sue Robinson, chief executive of the National Franchised Dealers Association (NFDA) agreed, describing 2020 as “challenging.” She went on: “December is always a turbulent month for LCV registrations with private and self-employed buyers holding back to have their van registered in the new year to protect residual values, therefore a decline of just -1 per cent was not unexpected”.

Demand for further online deliveries bolstered sales and registrations of the heavy LCVs weighing more than 2.5 – 3.5 tonnes showing an increase of 7.3 per cent, with 1,300 units more than the previous year. This heavy vehicle group up to 3.5 tonnes is the largest sector, representing around 60 per cent of all LCVs sold.

Demand for lower capacity light commercials was down across all sectors indicating the reluctance of semi-retail and self-employed to invest in new vehicles at a challenging time for their businesses.

A further potential factor that slowed the market was the fact that orders for new vehicles not in the UK could have been affected by EU tariffs had a free-trade deal not been agreed at the end of December.

Robinson added: “Following the overall decline in the van market in 2020 and despite the January lockdown that will cause some disruption, with greater reliance on local deliveries and services, and a tariff-free deal with Europe, dealers are more optimistic about 2021”.