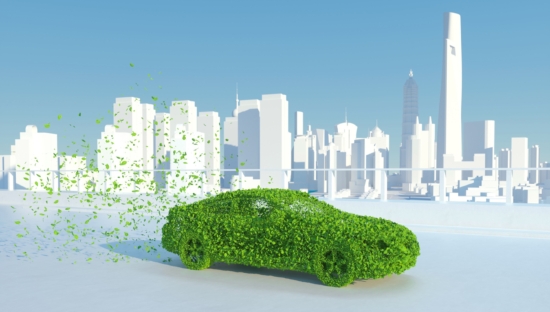 With sustainability becoming an increasing focus for tyre manufacturers, we looked at how the top 20 tyremakers compare according to the CDP ranking (Photo: Masanori Yoshida; Pixabay)

Bridgestone, Pirelli and Yokohama have achieved places in the 2020 Climate A list prepared by the CDP (former Carbon Disclosure Project), the international non-profit organization which gathers, distributes and promotes information on environmental issues. They are the only tyre manufacturers in the global top 20 to achieve this level. With sustainability becoming an increasing focus for tyre manufacturers, we looked at hope the top 20 tyremakers compare according to the CDP ranking.

In order to put the results into context, we looked at the entire global top 20, according to our annual tyre manufacturer ranking. The data shows a wide range of results for companies, but in general the larger companies score well on the CDP ranking and the results get worse as we go down the top 20. Exceptions to this include Toyo, which – with B- and B in climate change and water security respectively – outperformed its peers. And Nokian, which is the 18th largest in the world produced a score more in line with the top 10, with A- in climate change and B- in water security.

The “A” rating, which is given to only a few companies of the thousands participating, is the highest score that a company can receive. It takes into consideration the effectiveness of the efforts made to reduce emissions and climate risks and to develop a low carbon emission economy, as well as the completeness and transparency of information provided and the adoption of the best practices associated with climate impact. 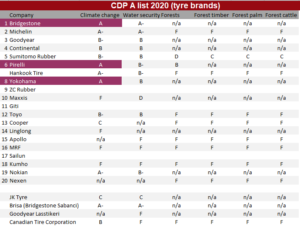 In the interests of clarity, here’s a brief explanation of what the scores mean. A and A- are described as leadership level. B and B- are management level. C and C- means awareness level. D and D- represent disclosure level. According to CDP, An ‘F’ indicates a failure to provide sufficient information to CDP to be evaluated for this purpose. Not all companies requested to respond to CDP do so. Companies who are requested to disclose their data and fail to do so, or fail to provide sufficient information to CDP to be evaluated will receive an F. Clearly an F is far from the best grade, but CDP highlights that “an F does not indicate a failure in environmental stewardship.” Not requested means the company was not requested to disclose by investors or its customers. And not scored means the company’s response was not eligible to receive a score. On our table, where the entry is blank the company was not surveyed. “n/a” means either the company was not scored in this category or that no score was requested.

Commenting on Pirelli’s A list placement, Marco Tronchetti Provera, Pirelli’s executive vice chairman and CEO said: “The recognition of the CDP confirms once again our commitment to sustainable development through the fight against climate change. It’s what we try to do every day through our Research – developing processes and products that are always more sustainable, safer and better performing”. All three of the A-list companies were contacted for comment.