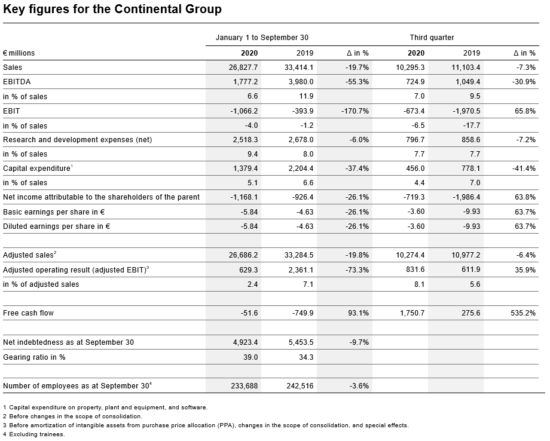 Consolidated sales in the third quarter amounted to 10.3 billion euros (Q3 2019: 11.1 billion euros). Before changes in the scope of consolidation and exchange-rate effects, sales were down 2.7 per cent compared to the same period of 2019. In the second quarter of 2020, they were down by as much as 40 per cent. The adjusted operating result (adjusted EBIT) in the third quarter rose to 832 million euros compared to the previous year (Q3 2019: 612 million euros), corresponding to an adjusted EBIT margin of 8.1 per cent (Q3 2019: 5.6 per cent).

In particular, the Rubber Technologies business sector and, within it, the Tire division, performed relatively well. While the figures for the first nine months are clearly red, the business turned in the third quarter. As Continental reports, the adjusted pre-tax profit margin (EBIT) increased significantly in the third quarter – with slightly lower sales – so that the Hanover-based company was able to achieve an adjusted EBIT margin of 17.1 with tyres from July to September (previous year: 14 per cent). Calculated for the first nine months, this figure was still 10.9 per cent (previous year: 14.3 per cent). While the Continental Group achieved an adjusted EBIT of 629 million euros for the nine-month period, the tyre business is apparently keeping the group ‘afloat’ with at least 794.9 million euros in adjusted EBIT.

However, market developments are being driven by North America and China, with Continental reporting that Europe continues to be weak. Market development in the third quarter was better than expected in China (6.3 million units; +10.7 per cent) and in North America (4.0 million units; +0.5 per cent). The disparity with Europe is because production of passenger cars and light commercial vehicles in Europe (4.2 million units; -8.0 per cent) – especially in Germany (0.9 million units; -16.1 per cent) – has not yet recovered and is substantially below the previous year’s level. According to preliminary figures, global production of passenger cars and light commercial vehicles was down about 3.5 per cent to 20.3 million units in the third quarter (Q3 2019: 21.0 million units).

Continental also published a new forecast for the course of the entire fiscal year today. 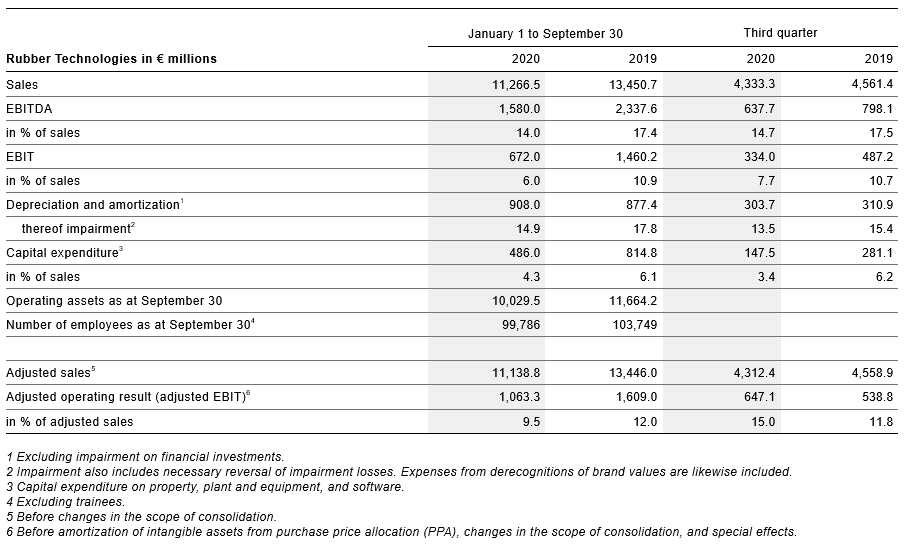