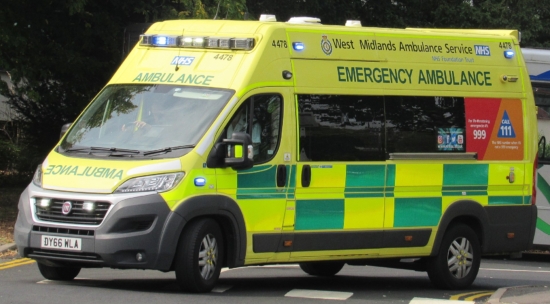 Vehicles based on the Fiat Ducato van chassis are one of a number of ambulance models adopted by regional fleets (Photo: Makizox; CC BY-SA 4.0- https://creativecommons.org/licenses/by-sa/4.0/)

Throughout 2020 Tyres & Accessories has been analysing the tyre choices of UK emergency services fleets. The series began with an investigation into the National Police fleet’s tyre demands, followed by closer looks at the Kent, Metropolitan and West Midland force fleets. At the start of November, we took a look at some key Fire Brigade fleets. Now it is the turn of the Ambulance service.

Like the Police and the Fire Brigade, Ambulance service tyre consumption is put out to tender nationally via what is called the Crown Commercial Service framework agreement. That was due to expire this year, but as a result of the Covid-19 pandemic it has been extended for another year into 2021. While tyre purchasing is conducted nationally, as with the police and the fire brigade, Ambulance Service fleets are operated regionally. This means that, despite there being a national purchasing agreement, there is always room for some variation on vehicle type, tread depth policy and – as was especially clear in the Police tyre consumption data – even tyre brand choice.

In order to find out more about tyre selection and usage within main UK Ambulance Service fleets, we sent freedom of information requests to all 10 of the English mainland services. Seven (the East Anglia, East Midlands, North East, North West, South East Coast, West Midlands and Yorkshire Ambulance services) provided enough data to be able to conduct our research, but as in T&A’s previous blue-light fleet analyses, we have focused on the largest fleets providing the most data in order to gain the clearest insights into what is going on.

Of course, Ambulance fleets range in size and vehicle type, however there are several clear trends. Firstly, the sampled ambulance fleets’ respective tyre consumption amounted to between 2000 and 4270 tyres a year per fleet between July 2019 and June 2020. The North West was the largest tyre consumer, purchasing 4270 tyres a year. And the North East was the smallest annual tyre buyer, with demand at 2000 tyres during the survey period. However, four out of the seven fleets reported tyre demand of between 3500 and 3752 annually. So, with a mean average of 3425 and mode value of 3500, it is reasonable to suggest 3500 as a typical example of annual ambulance fleet tyre demand (see chart 1).

With this in mind, the East Midlands Ambulance Service, with its 3529 tyre a year consumption rate is a good choice for a closer look at an “average” fleet. Since ATS Euromaster won the service partner part of the of the Crown Commercial Services tyre contract, all ambulance fleets are supplied via the Michelin-owned tyre retail entity. And as far as tread depth policy is concerned, most Ambulance fleets change their tyres at 3mm. The East Midlands fleet is an exception to this rule, adhering to a 2mm policy. Nevertheless, the national average of the surveyed fleets is 2.83mm, which is, of course, closer to 3mm than to 2mm.

As far as tyre selection is concerned, one thing is immediately clear: Ambulance fleets prefer Michelin tyres. Of course, this may well have a lot to do with the fact that ATS Euromaster won the tyre service part of the Crown Commercial services fleet tender. Moreover, Ambulance Fleets are extremely loyal to brand when you compare the data with Fire Brigades (see page 28 Tyres & Accessories November 2020) and even more so with Police Fleets (see T&A June to August 2020).

If we continue to take the East Midlands fleet as our example, 98 per cent of annual tyre demand was fulfilled by Michelin brand products. The vast majority of the remaining 2 percentage points was occupied by Avon (1.79 per cent share), followed by BF Goodrich, Goodyear, Bridgestone, Continental, Hankook and Pirelli who salami-sliced the remaining 0.21 per cent between them (see chart 2) 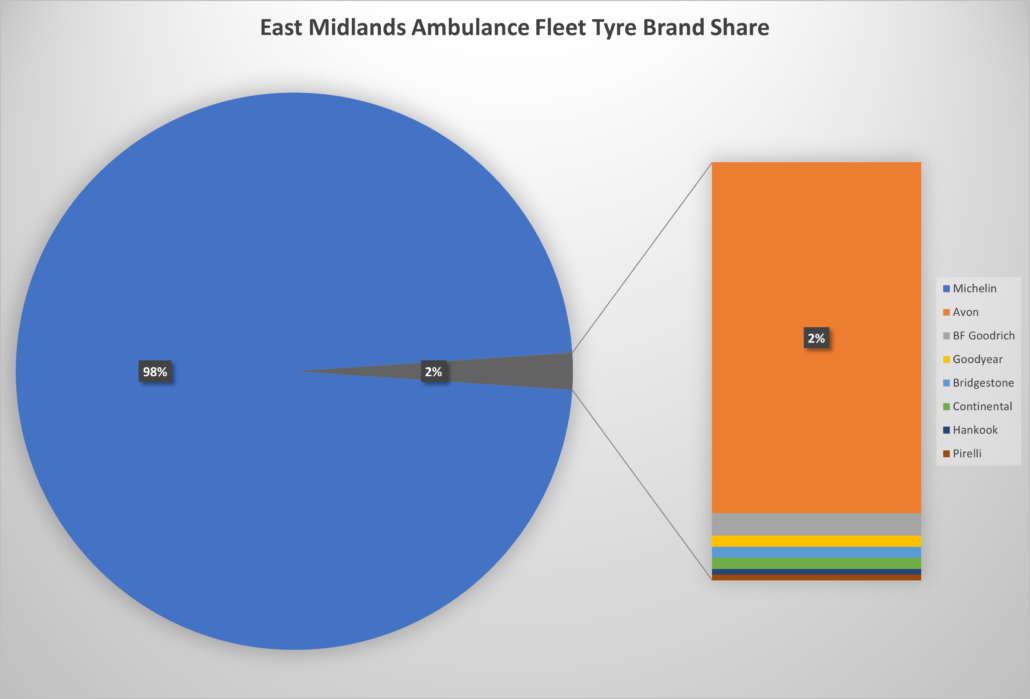 As far as tyre selection is concerned, several fleets said they were already running a 100 per cent CrossClimate policy. Several others stated that they were currently at 50 per cent Cross Climate, with the rest shared between other Michelin brands and the intention to transition to CrossClimates. In other words, Ambulances services very strongly favour Michelin-branded, year-round tyres and the CrossClimate product family in particular.

But what are the reasons for tyre change? It would be surprising if – given the inherently diverse and challenging service of life of Ambulances – tyre change data was made up of normal tyre wear and 3mm changes. In order to answer this question, let’s take a closer look at the Yorkshire Ambulance Service. With annual tyre consumption of 3350, a 3mm tread depth policy and 100 per cent Michelin CrossClimate fitment preference, Yorkshire Ambulance represents another fleet typical of the national context.

Of the 3550 tyres Yorkshire Ambulances consume a year, 2534 (roughly 71 per cent) are changed due to normal tyre wear. However, a wide range of reasons are given for why the remaining 29 per cent needed to be changed. The foremost amongst these is puncture, which accounts for 739 tyres (more than 20 per cent of the whole). Sidewall damage, which caused 112 tyre changes in 2019/2020, is another key reason. Shockingly 54 tyres a year were changed because “cords exposed” was written on the inspection sheet. Apart from anything else, raises questions about just how thoroughly the fleets 3mm tyre change policy can be adhered to. Another 13 reasons are given for the remaining few percent of tyre changes (see chart 3).

When the Yorkshire Ambulance data is broken down by calendar month, December and January stand out as peak tyre change months, with 443 and 401 tyres changed during those months respectively. This compares with 202 tyres in May (the lowest demand month) and is roughly 50 per cent higher than the 12-month average of 296.

While the East Midlands are Yorkshire fleets are just two fleets out of the English total of 10, since they are of typical size and make-up we can get a flavour of national Ambulance fleet tyre demand by extrapolation. Since the Welsh, Scottish and Northern Irish Ambulance fleet tyre demand is not dissimilar to the English regions and since it is covered by the same Crown Commercial Services tyre framework agreement, we can basically multiply the results of the typical fleets by 13 in order to estimate national trends.

Therefore, national Ambulance fleet tyre demand was an estimated 45,500 tyres between July 2019 and June 2020. Of these roughly 44,600 were Michelin branded tyres and an increasing majority of these were Michelin CrossClimate tyres. Approximately 32,300 tyres fulfilled their normal service life and were changed at the Ambulance standard tread depth of 3mm. However, something like 9,600 Ambulance tyres had to be changed as a result of punctures and around 1,450 were taken offer as a result of sidewall damage.