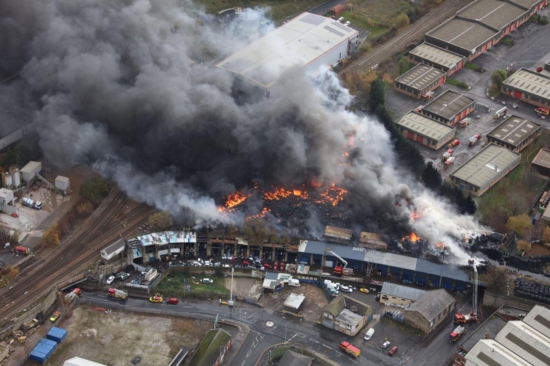 The tyre fire started in the early hours of Monday morning in Bradford continued to cause disruption in the local area as thirteen schools were forced to remain closed on Tuesday. Trains remained unable to access the city’s Interchange and thick smoke reached as far away as neighbouring city Leeds, as the severe effects of the fire continued into a second day despite its containment by fire crews. A previous occupant of the site, karting charity OnTrack, confirmed to the Telegraph & Argos that it had removed “everything” it owned when it left Spring Mill Street in mid-2019. Considering the Environment Agency (EA) was probing potentially illegal activity at the site in July 2020, evidence is building that the waste tyres fuelling the blaze were stored improperly. Tyres & Accessories asked Peter Taylor, the secretary general of the Tyre Recovery Association, who warned of the dangers of a rise in non-compliant stockpiling earlier in the year, whether the incident shows that changes are needed in the way regulations governing waste tyre storage are enforced.

Taylor acknowledges that the EA “has upped its enforcement efforts in recent times.” However, he adds that “the process often ponderous and therefore slow.” The association has frequently argued that the current exemptions regime in England and Wales, which allow sites to store limited numbers of waste tyres without obtaining full permits, “often lies at the root of this problem.” While Scotland “acted to outlaw exemptions several years ago… only now it seems are Defra and the EA minded to follow a similar path. It is long overdue.”

At the same time, Taylor called on the broader tyre industry to act with greater urgency to prevent rogue operators causing collective reputational damage. “Not all the blame for such incidents should be pinned on the authorities. There exists a small but wilful minority of operators, small retailers and others at the margins of our industry who heap discredit on us all. As an industry we could and should act more decisively against them.”

Taylor concluded: “As an industry we have both the capacity and the best practice infrastructure to deal responsibly with all of our old tyres. A few simple steps such as enhanced legal ‘Duty of Care‘ requirements coupled with a very early end to Exemptions would do much to consign such damaging incidents such as this to the past.”