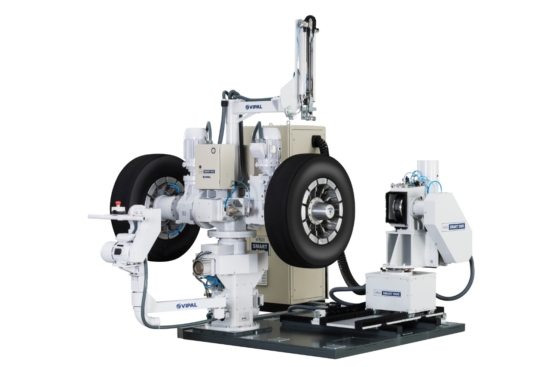 Vipal’s VR01 Smart Duo is pictured. In addition to the United States, it is possible to find machines produced by Vipal in Brazil, Argentina, Uruguay, El Salvador, Spain and New Zealand. (Photo: Vipal)

Vipal Machinery is reporting growing sales in the USA, having sold five machines so far this year in the world’s largest tyre retreading market. According to the company, four major North American retreaders acquired the five pieces of machinery including Pete’s Road Services based in Corona, California.

Pete’s Road Services is described as a ”traditional and renowned tyre retreading company, with 50 years of market experience”. The firm installed a Vipal VR01 Smart Duo buffer. Kyle Fletcher, Pete’s Owner, says he decided to buy the machine because he knows about its cost-benefit, in addition to knowing that he can count on the services and technical support that Vipal offers. “We have already had a very good experience with Vipal in the supply of pre-cured treads and now we are also betting on their equipment, which should give us significant quality gains to be seen by what this machine we have acquired provides us”, Noe Lara, Pete’s operational manager stated.

Gabriel Fuma, Commercial Manager at Vipal NAFTA, celebrates the success that Vipal´s machinery has in the United States market: “we entered in the best way possible, with first-rate customers like Pete’s, who are constantly focused on delivering quality and value to their users. So, to be the partner chosen by a customer of this level is always very satisfying”.

The same buffer has also been ordered by another major retreader, Retread Solutions, in North Carolina. However, Retread Solutions went even further and acquired yet another piece of equipment from Vipal Machinery: a VOC 760 Cargo. Geared towards applying cushion gum in the cargo tyre retreading process and seeks to optimize the demands of retreaders at a low cost. Two more of the VOC 760 Cargowere also marketed to US customers in 2020: to Jewell Tire Center, in Oxford, Maine, in August, and Purcell Tires and Service Center, at its Portland, Oregon facility where Vipal´s technician team will install it.

Speaking of opportunities, Vipal Machinery has the best of expectations in the United States. “We have very good prospects. This market went several years without any growth expectations, but after the increase in tax on Chinese tyres and a healthy economy, the segment started to return to a path of growth”, Fuma explains. “Retreaders in general are optimistic about the future of retreading and, with that, plans for investing in equipment and in the modernization of their factories have been renewed”, he concluded.

Vipal sees diversification into the machinery segment as a necessary strategy in order to develop its place in the overall global retreading business. The initiative is part of the company’s vision to focus on the competitiveness of its partners, distributed in over 90 countries on five continents. In addition to the United States, it is possible to find machines produced by Vipal in Brazil, Argentina, Uruguay, El Salvador, Spain and New Zealand.

The Director of International Business at Vipal Rubber, Leandro Rigon, stressed the importance of conquering a competitive market like North America: “Tyre retreading in the United States is a reference for everyone in this sector, as it is the largest volume and where the biggest players are. In addition, one of Vipal´s main product export destinations is the United States, where it also has Distribution Centers in strategic locations in the country. In this context, our own manufactured machines entering North American soil symbolizes a new step that we are taking. Vipal Machinery employs all the technical and technological capacity in its engineering that Vipal Rubber has gathered throughout its over 47 years. Thus, we will continue to invest in expanding our equipment and business portfolio in the global market”.

Vipal has three distribution centres in the United States – Los Angeles (California), Miami (Florida) and Norfolk (Virginia) – to meet the growing exports to the American market. Following this strategy, the company also dedicates one of its four manufacturing plants exclusively for exports.