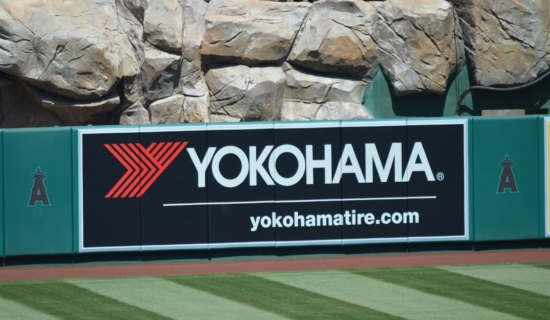 Yokohama has been a sponsor of the Los Angeles Angels baseball team since 2011 (Photo: Yokohama)

Yokohama has been a sponsor of the Los Angeles Angels baseball team since 2011 and the tyremaker’s corporate logo will again be featured prominently in left centre field, where three-time American League MVP Mike Trout plays.

“Yokohama continues to benefit from our 10-year relationship with the Los Angeles Angels,” said Alan Holtschneider, Yokohama’s director of marketing. “They’ve been a phenomenal marketing partner, helping us build strong brand awareness for Yokohama tires among their passionate fan base.”

As part of the 2020 sponsorship program, Holtschneider said Yokohama will also have more branding opportunities, including field signage along the first base and third baselines for one inning during each game.

“The shortened 60-game season is going to be thrilling,” said Holtschneider. “With Mike Trout, 2018 Rookie of the Year Shohei Ohtani, and the off-season signing of third baseman Anthony Rendon, the Angels have a powerhouse team that will be one of the most exciting clubs in baseball to watch.”