You are here: Home1 / News2 / International News3 / Trump, the presidential limo and its tyres

Trump, the presidential limo and its tyres 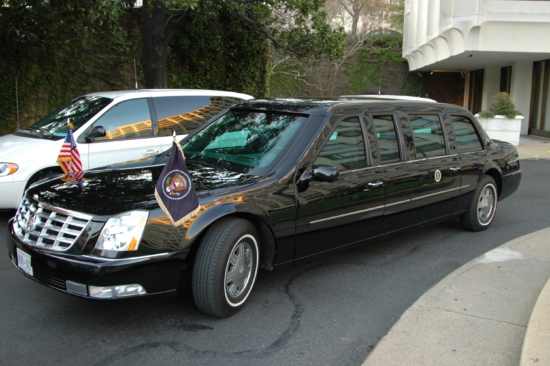 It is an open secret that the US presidential limo, affectionately known as “the beast” runs on Goodyear tyres. What many people are less aware of is that – owing to the fact that “the beast” has significant amounts of armour plating – unlike most limousines, the US presidential limo is actually fitted with 19.5-inch truck tyres that are better suited to the vehicle’s increased load. Whatever the fitment, 24 hours after Donald Trump tweeted “Don’t buy GOODYEAR TIRES”, adding: “Get better tires for far less!”, one has to ask if the current incumbent of the White House will be taking his own advice.

Tyres & Accessories contacted the White House for comment, which so far has not been forthcoming. But that didn’t stop the White House press corps from raising related questions themselves. Shortly after President Trump made his inflammatory remarks about Goodyear, White House transcripts report that one journalist asked: “is the Beast still going to be using Goodyear tyres?”. White House press secretary Kayleigh McEnanny flat-batted the initial question with “I’m not going to comment on security matters.”

However, after being pressed on why the president is “retaliating against a private company for their dress code and potentially jeopardizing American jobs?”, McEnanny suggested “Goodyear needs to come out and clarify their policy,” adding: “They [Goodyear] came out and said ‘equity issues.’ As far as I’m concerned, Blue Lives Matter is an equity issue. There have been police officers across this country that have been targeted because they wear the badge…”

Later President Trump answered the same questions in his own words, accusing Goodyear of playing politics: “I’m not happy with Goodyear because what they’re doing is playing politics. And the funny thing is the people that work for a Goodyear — I can guarantee you I poll very well with all of those great workers in Goodyear.”

He continued by pointing the finger firmly at the Goodyear’s senior leadership: “And when they say that you can’t have ‘Blue Lives Matter,’ you can’t show a blue line, you can’t wear a MAGA hat, but you can have other things that are Marxist in nature, there’s something wrong with the top of Goodyear.”

But will the president replace the Goodyear tyres currently fitted to “the beast”? The President’s answer: “Yeah, I would do that. I would — I would swap them out, based on what I heard. We’ll see what happens. Hey, look, you’re going to have a lot of people not wanting to buy that product anymore, and they’ll buy from a competitor — made in the USA, too. Okay?” Which leaves one more question: exactly which US-made tyres does the President think are “better and cost far less?”