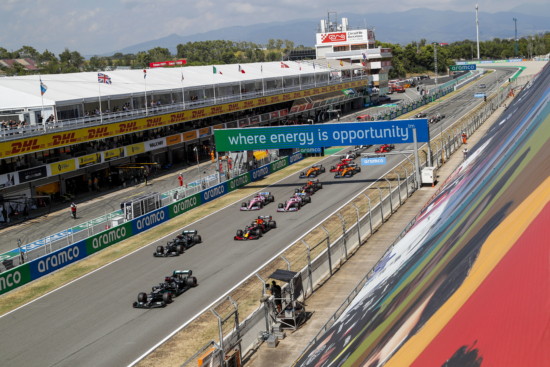 Mercedes’ Lewis Hamilton won in Spain from pole with a two-stop soft-medium-medium tyre strategy in some of the hottest track conditions experienced by Formula 1’s drivers. Pirelli’s head of F1 and car racing, Mario Isola commented that “managing the tyres in these demanding conditions with nearly 50 degrees of track temperatures was a big challenge, especially on the soft tyre.” There were seven different strategies seen in the top eight.

Red Bull’s Max Verstappen was second, having stopped a few laps before Hamilton on each occasion. The other Mercedes of Valtteri Bottas finished third, also starting on the soft before moving onto the medium, but the Finn stopped twice again: for the soft tyre and then for the medium, making his third and final stop with two laps to go. He took the extra championship point for fastest lap.

While the majority of drivers completed two stops, some did just one: with Racing Point’s Sergio Perez in fifth starting on soft and switching to medium, while Ferrari’s Sebastian Vettel started on medium from P11 on the grid and then did an exceptionally long final stint on the soft to secure seventh. McLaren’s Carlos Sainz finished sixth with a soft-soft-medium strategy while Red Bull’s Alex Albon was eighth with another unique strategy: soft-hard-medium. Albon was the only driver to use the hard throughout the race.

The overall race time in Barcelona was nearly 10 minutes faster than 2014: the first year of the hybrid turbo era. That translates into an average lap time that is more than eight seconds per lap faster: a rate of development that the tyres have been able to constantly keep pace with.

Isola added: “we saw stints of more than 30 laps on them, which was extremely impressive, leading to some one-stop strategies that we didn’t expect. In particular, Racing Point’s Sergio Perez was fifth with soft-medium one-stopper, while Ferrari’s Sebastian Vettel also stopped once with a brave strategy, going from medium to soft. Despite the hottest temperatures that many of the drivers have ever raced and a wide range of demands, the tyres stood up extremely well to the challenge.”