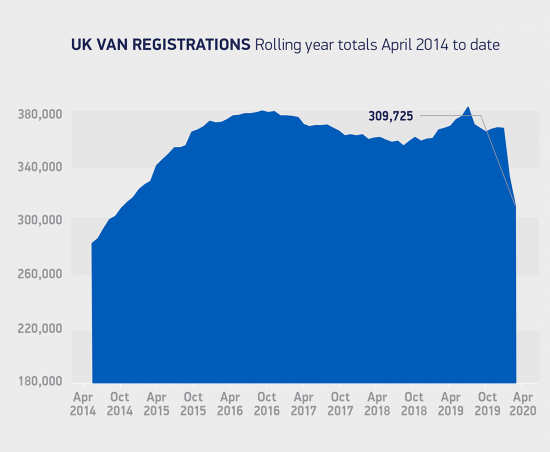 3,387 new light commercial vehicles were registered in the UK in April, 21,217 fewer than in the same month last year. The Society of Motor Manufacturers and Traders (SMMT) figures show that the market declined -86.2 per cent in the month as nearly all registrations stopped due to coronavirus lockdowns.

Demand for smaller commercial vehicles was hit badly, with just 271 pickups registered in April, down -91.8 per cent, while vans weighing 2.0 tonnes or less saw a -92.3 per cent decline and registrations of mid-sized vans weighing more than 2.0-2.5 tonnes fell -90.4 per cent. Meanwhile, demand for larger vans weighing more than 2.5-3.5 tonnes was down -83.1 per cent, with 2,588 vans delivered to operators, many of them working on the front line of the national crisis.

With lockdown measures effective across the country since mid-March, performance year-to-date has declined -44.0 per cent, with over 56,000 fewer vehicles registered than in the same period last year. SMMT’s latest forecast expects an overall LCV market decline of -28.0 per cent for 2020, equivalent to a market of 263,000 units by the end of the year. Although registrations are expected to recover in 2021, the expectation is still for a -6.1 per cent decline on 2019, which was a particularly healthy year.

Mike Hawes, SMMT chief executive, said, “These figures, while not surprising, are still shocking. Restoring business confidence and delivering the safe restart of retail operations will be key to kick-starting demand. Getting this important market moving again will be critical to the wider automotive sector’s recovery and provide a boost to the UK economy as we begin emerge from this crisis.”

The 3,387 vans registered in April were largely made up of orders rushed through to meet demand of industries working on the front line of the coronavirus response, including fleets for the NHS, emergency services, pharmaceutical, food distribution and home delivery services, as the nation grew more reliant on these key businesses. 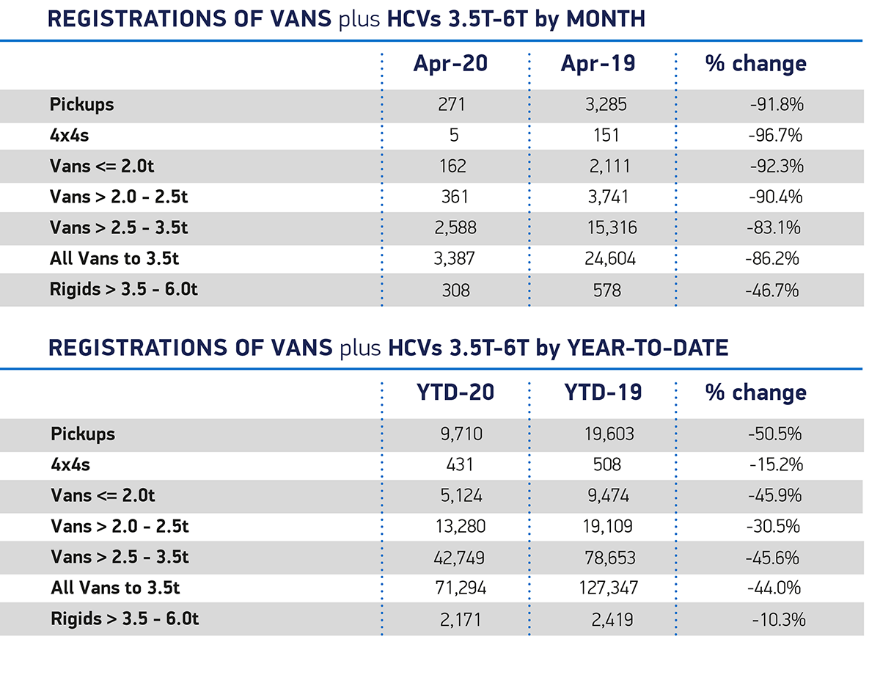 Sue Robinson, director of the National Franchised Dealers Association called the decline “unsurprising”, adding that the association has been working with the government on its plans for a strong reopening when possible.

Robinson continued, “The closure of dealerships has significantly impacted the sales of vehicles that are commonly used by self-employed contractors or small businesses, but many service vehicles were still ordered in April to meet the need for the effort against coronavirus. This has buoyed the figures from crashing completely.

“NFDA has been closely monitoring and liaising with Government to ensure the LCV market will be able to maintain its strength for the rest of the closure period, and with manufacturers and businesses to ensure that when dealerships reopen, the sector will be able to recover effectively.”

The association also noted that the Mercedes-Benz Sprinter succeeded the Ford Transit Custom to become the best seller in April with 814 units, owing to it being commonly used in the emergency services as an ambulance vehicle, and in online deliveries. Similarly, the Iveco Daily made it into the top ten as it is also widely used for supermarket online deliveries.