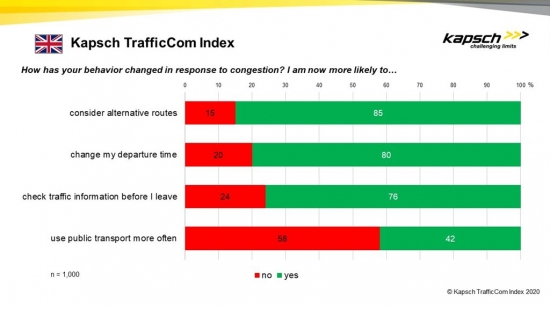 Around 80 per cent of motorists in the UK consider taking an alternative route to avoid traffic jams and congested roads. For less than half, using public transport is an option. This was the result of a survey conducted immediately before the outbreak of the Corona pandemic in March. After the Corona restrictions have been lifted, public transport will likely be even less popular and traffic congestion will become even worse – something that is of interest to the tyre business, which is keeping close tabs on miles-driven figures because they correlate with tyre demand.

Drivers respond to traffic congestion by considering alternative routes (85 per cent), changing their departure time (80 per cent) or checking travel information before leaving (76 per cent). In contrast, less than half of all drivers (42 per cent) could imagine leaving their car behind and using public transport instead.

“We expect that public transport will be even less popular for getting from A to B after the Corona pandemic”, says Steve Parsons, Head of UK Sales Kapsch TrafficCom. “Traffic management will have to deal with this”.

Increasing traffic volumes and road congestion have been long-term developments preceding the Corona pandemic: a key driver has been the sharp rise in the number of registered cars. The number of licensed cars in the UK rose to 32.5 million vehicles within five years (2014-2018) – an increase of 2 million cars.

How to reduce congestion times by a quarter

As a first option the digital control of traffic lights should be considered. Experience shows that congestion times can be reduced by up to a quarter. The widespread use of SIM cards and vehicle-based GPS also makes it possible to obtain and use real-time traffic data from vehicles. This could dramatically improve our understanding of the actual traffic situation on the roads, which in turn could help predict traffic jams. The benefits would be comparable to the introduction of satellites in meteorology, which improved weather forecasting – explains Steve Parsons.

Currently route planners and guidance systems still work “selfishly” in that they ignore the responses of other motorists: to avoid traffic jams, the navigation systems suggest the same alternative route to all vehicles. In the future, the suggested routes should be determined and optimised by public traffic control centres. The public administration’s knowledge of road works, events or particular environmental pollution in certain areas can be taken into account when suggesting new routes to the benefit of the community. Navigation systems from Google, TomTom & Co will be part of this network.

Kapsch TrafficCom provides “intelligent transportation systems”. As part of the Kapsch Group, Kapsch TrafficCom with headquarters in Vienna, has subsidiaries and branches in more than 30 countries. It has been listed in the Prime Market of the Vienna Stock Exchange since 2007 (ticker symbol: KTCG). Kapsch TrafficCom‘s about 5,000 employees generated revenues of 738 million euros in fiscal year 2018/19.

Black Bear Carbon preparing to go back on-stream prior to technology’s ro...