April’s US trailer demand down 99 compared with 2019 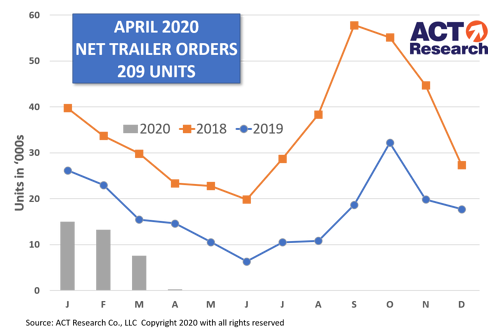 “It is difficult to comprehend a report of 209 net total trailer orders in April,” said Frank Maly, Director–CV Transportation Analysis and Research at ACT Research, adding: “By far the weakest monthly net order volume in industry history, April was disturbingly close to a net negative order month, and even new order volume of just under 6,000 trailers was the fourth worst month since 1990.”

Maly continued: “Several discussions regarding April included comments indicating that the shift in fleet investment plans was abrupt, and more concerning were the comments that fleet confidence continued to worsen in May, with recent descriptions depicting the market as the worst ever experienced. The surge in freight volumes that came from critical goods movement and what could easily be termed consumer ‘panic buying’ is done, and fleets perceive that shift. Large fleets remain on the sidelines, and financial pressures will likely push many small and medium fleets entirely off the playing field, leaving some very challenging months ahead.”