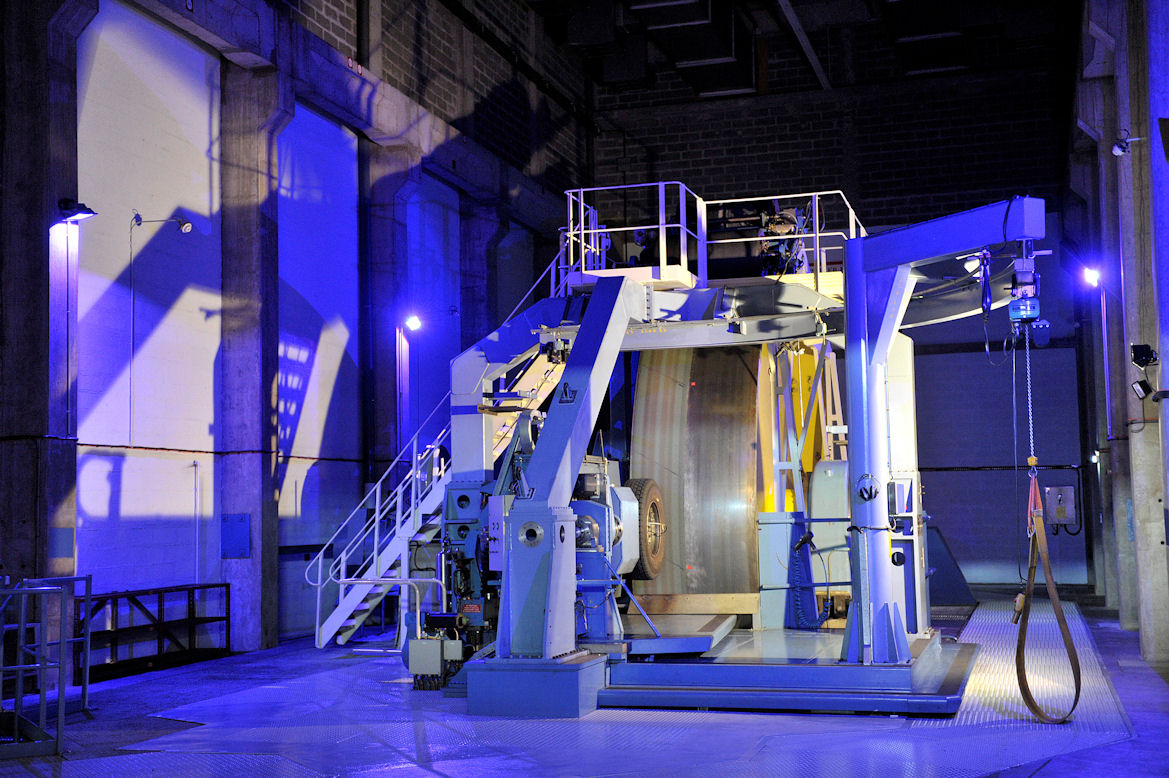 Michelin’s MaRCoPoLo system was commissioned in 2000 and is utilised for testing truck tyres (Photo: Michelin)

Michelin commissioned a test bed specifically for truck tyres at its Ladoux production site in France back in 2000, its Machine de Recherche en Comportement Poids-Lourd – or MaRCoPoLo, for short. When deciding to modernise this facility 16 years later, the tyre maker chose Siemens as a partner for updating the automation and process control systems.

Siemens’ selection built upon existing cooperation between the two firms and falls within a four-year global partnership contract as supplier of industrial automation technology and engineering software to Michelin. Collaboration on this latest project is expected to not only improve data consistency and repeatability within Michelin’s testing, but also improve the test bed’s measuring accuracy.

The tyre industry invests millions in product development in order to keep pace with changing expectations towards safety, fuel efficiency, mileage and environmental friendliness. This trend is best known in the car tyre sector but applies to truck tyres as well, and even more parameters must be considered when developing products for this sector. Intended application – be it long-distance, regional traffic, construction site on-/off-road – has to be taken into account, as does axle position. Very different forces act upon steer, drive and trailer tyres, and manufacturers need to reconcile the resulting demands upon the properties of the chosen design and materials without losing sight of safety and efficiency.

With this in mind, Michelin monitors and verifies performance by subjecting its tyres to various tests throughout their development. These include simulations, laboratory and test bed testing as well as vehicle testing on both closed tracks and public roads. MaRCoPoLo was added to the company’s test equipment portfolio at the start of the current century. This test bed, which Michelin specifically built for testing heavy commercial vehicle tyres, is designed to work with speeds of up to 90 km/h. It features a movable axle that’s adjustable to accommodate different-sized tyres. Position and the load acting upon the tyre can be varied to simulate a range of driving conditions, for example how a tyre behaves when cornering at different speeds and loads. Michelin uses the knowledge it gains here to further develop its truck tyres.

Bringing systems up to date

The test bed developed in 2000 was based upon an existing drum test bench. The revamped unit was equipped with the latest and greatest in measuring and control systems. These maintained their functionality until quite recently, but after years of operation were no longer state-of-the-art. Jeremy Buisson says that because MaRCoPoLo has long been a central component in Michelin’s development process, the tyre maker began examining options for updating its test systems in 2016. “We wanted to proactively bring our systems up to date before malfunctions or unexpected breakdowns interrupted the test bench’s operation,” explains Buisson, who is tyre and material test bench engineering manager at the Michelin Technology Centre in Ladoux. Test bench specialist InTest was thus commissioned to bring together the latest technologies from a range of suppliers for use in MaRCoPoLo.

The spec sheet called for a system that would at the very minimum correspond with the previous system’s consistency and precision. It was also necessary that its measurement parameters deviated as little as possible from the old system to ensure the comparability of test results from both. “But the most important thing for us was meeting the requirements in the area of motion control: Measurement results for axle load and angle serve as the basis for complex calculations in our work. Tyres aren’t rigid objects; they can be plastically deformed if subject to corresponding external forces. The output values from the machine and sensors have to be continuously fed back into the control system,” explains Buisson. This demanded “a solution that on the one hand is precise and on the other adaptable.” A project team comprised of representatives from Michelin and InTest assessed various technical aspects and reviewed the tenders submitted by several suppliers.

InTest was ultimately able to win the tyre maker over with its proposal to choose test and measurement equipment specialist HBM to supply the measurement system, including a CX27c Profinet gateway, and Siemens to supply the automation system.

“During this phase we conducted in-depth discussions regarding technical details with suppliers who were being considered as partners. Siemens’ excellent suggestions during these discussions helped us decisively in the core issues,” says Buisson. Siemens’ case was also aided by its specialist knowledge of Michelin and the two company’s prior, fruitful collaboration. For the test bench’s upgrade, Siemens supplied motion control systems for positioning and synchronising axles as well as industrial communication components for integrating the automation solution with the sensors and the control room.

The decentralised Simatic ET 200SP peripheral system integrates signals at field level, and a failsafe Simatic S7-1500 PLC controls all the machine’s central functions as well as its safety systems. “This solution not only enables rapid communication with the sensors and control room, as well as the different axles’ drive systems, it also calculates correct position and speed values,” explains Buisson.

“Typically, it takes two milliseconds just to query parameters and calculate a new setpoint. This solution achieves much more within the same period of time: Its calculation brings in many complex factors, such as data output by the SCADA system, sensor or drives, or the influence of inertia upon the entire system,” he enthuses. This performance was a particularly important factor – but by no means the only one. In Buisson’s words, Michelin placed great value on consistency and precision.

In order to minimise risk during the changeover, the system was first tested on a smaller, specially-designed machine with a simpler configuration. This enabled the systems proposed by InTest, HBM and Siemens to be validated. “We also conducted several studies to prepare for the upgrade and to make the switch to the new automation system quick and easy,” continues Buisson. He adds that thanks to this detailed planning, the system was able to go live within just four months. “This is a very good result, especially when you consider that it involved replacing a company-specific machine’s entire automation and motion control system, and that we also performed all preliminary and subsequent checks and calibrations during this period.”

After the new systems entered operation, the Michelin project team carried out a number of additional tests to record the equipment’s performance and compare it with that of the previous system. “In order to confirm the validity of the test results achieved with the new system, we chose as test objects tyres that had already been tested prior to the changeover. To our great satisfaction, any deviations from the previously-obtained results were extremely small, therefore the test bench only required minimal calibration,” says Buisson. “We hadn’t counted on the much higher accuracy of the results – three to seven times higher, depending on the type of measurement. After all, the sensors and mechanical parts are still the same. Only the position control and data acquisition systems are new. It is impressive that they alone have such an enormous effect on test results.” It is now possible to see the influence of tyre construction at a much greater resolution.

Knowledge may benefit other tests

Michelin reports that the equipment has operated with 100 per cent reliability since its commissioning, and Buisson praises the support received from Siemens throughout the entire project. “Both in technical questions and in relation to the supply of required components. There were no problems or drawbacks, and apart from the scheduled downtime necessary as part of the retrofitting the operation was able to continue as normal,” he says, summing up what he considers an extremely satisfactory result.

As MaRCoPoLo belongs to a larger portfolio of test bench equipment that Michelin uses to test car, light commercial vehicle and motorcycle tyres, the experience and knowledge gained in the latest project could benefit the results obtained when using corresponding machines for other categories of tyre. Michelin will also be able to use the knowledge gained from converting MaRCoPoLo for further projects.

Michelin’s MaRCoPoLo system was commissioned in 2000 and is utilised for testing truck tyres (Photo: Michelin)

MaRCoPoLo tyre tests are performed at simulated driving speeds of up to 90 km/h & with different values for load, speed, pressure, slip and camber. The results are used to optimise tyre designs (Photo: Michelin)

Michelin exhibits the small test bench used for system validation in its showroom in Ladoux so that customers can see its “competence in the application of test procedures” (Photo: Michelin)