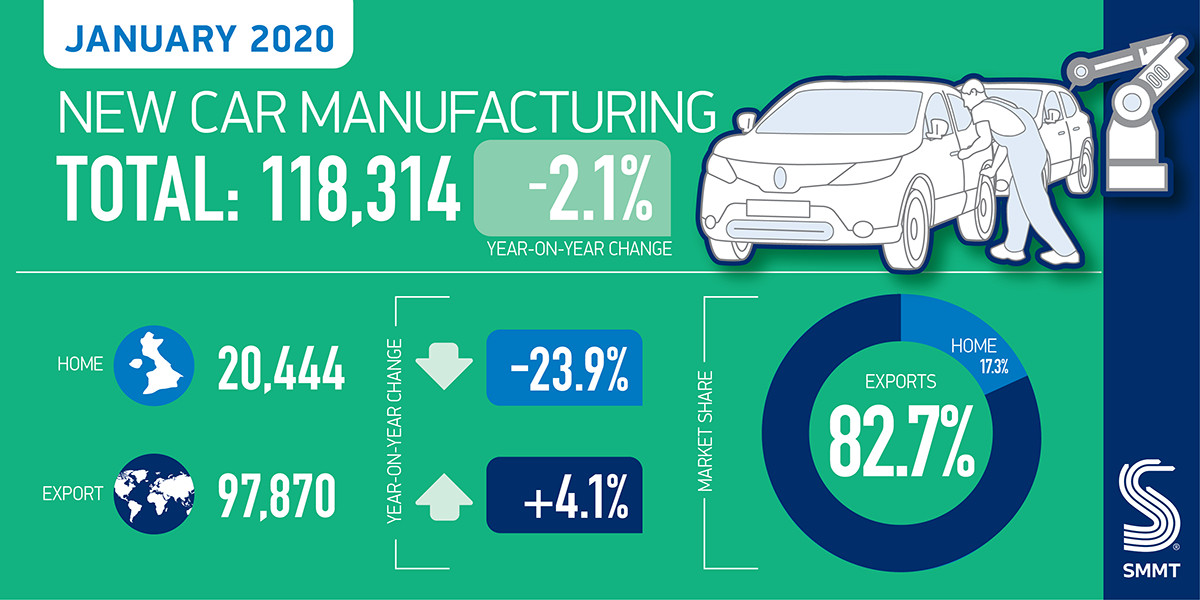 British car production fell -2.1 per cent in January 2020, Society of Motor Manufacturers and Traders (SMMT) figures reveal. As well as being the fifth consecutive month of decline, with 118,314 units produced, UK car production has now fallen in 19 of the last 20 months. The majority (82.7 per cent) of these cars were built for export worldwide.

Overseas orders rose 4.1 per cent to 97,870, boosted by the appeal of the latest models coming to market from certain brands, with rising demand for them in key European and Asian markets. However, this growth failed to offset a double-digit fall in production for the UK. Output for the domestic market fell sharply, down -23.9 per cent, with continuing weak confidence meaning January car production overall recorded its lowest total for nine years.

Mike Hawes, SMMT chief executive, said, “Exports are the bedrock for UK car manufacturing so a rise in January exports is welcome following recent declining demand in overseas markets. These figures, however, still give great cause for concern, with another month of falling car production driven by a lack of confidence and corresponding weak demand in the UK.

“The upcoming Budget is an opportunity for the government to provide supportive measures to stimulate the market, but the biggest boost would be the agreement of an ambitious free trade deal with Europe. This would end the ongoing uncertainty and help the UK to recover its hard-won reputation as a great place for automotive investment.” In response to the continuing fall in UK manufacturing, Kevin Brundish, CEO of electric vehicle battery manufacturer AGM Batteries, warned that the UK must prioritise the creation of an on-shore, full cycle supply chain if the manufacturing sector is to grow and meet the growing demand for electric vehicles and energy storage. He said that this would not only stimulate the economy and create jobs, but is more eco-friendly and avoids reliance on unpredictable external factors such as coronavirus.

He comments: “The electrification of vehicles is a crucial factor in achieving the UK’s carbon neutral 2050 targets. In order to meet the unprecedented demand for electric vehicle battery production, the UK will need the equivalent of a staggering eight 15GWh Gigafactories by 2040[2].

“With battery demand for the automotive and energy storage market set to skyrocket, leading British manufacturers like ourselves are hoping for investment in the infrastructure needed to service the industry. The UK’s economy can be boosted with manufacturers who are able to keep up with the huge expansion of this market and create jobs.

“Battery supply for the UK manufacturing industry is already struggling to meet demand, and in response, the UK Government should continue to prioritise the creation of on-shore, full cycle battery plants instead of relying on large scale manufacturers abroad. It is costly and increases carbon footprint to have these batteries imported, especially when the UK has the talent and capabilities at home.

“Creating a robust UK supply chain for the production of lithium-ion batteries would strengthen the UK’s car industry, making the country an attractive destination for international car-makers.”