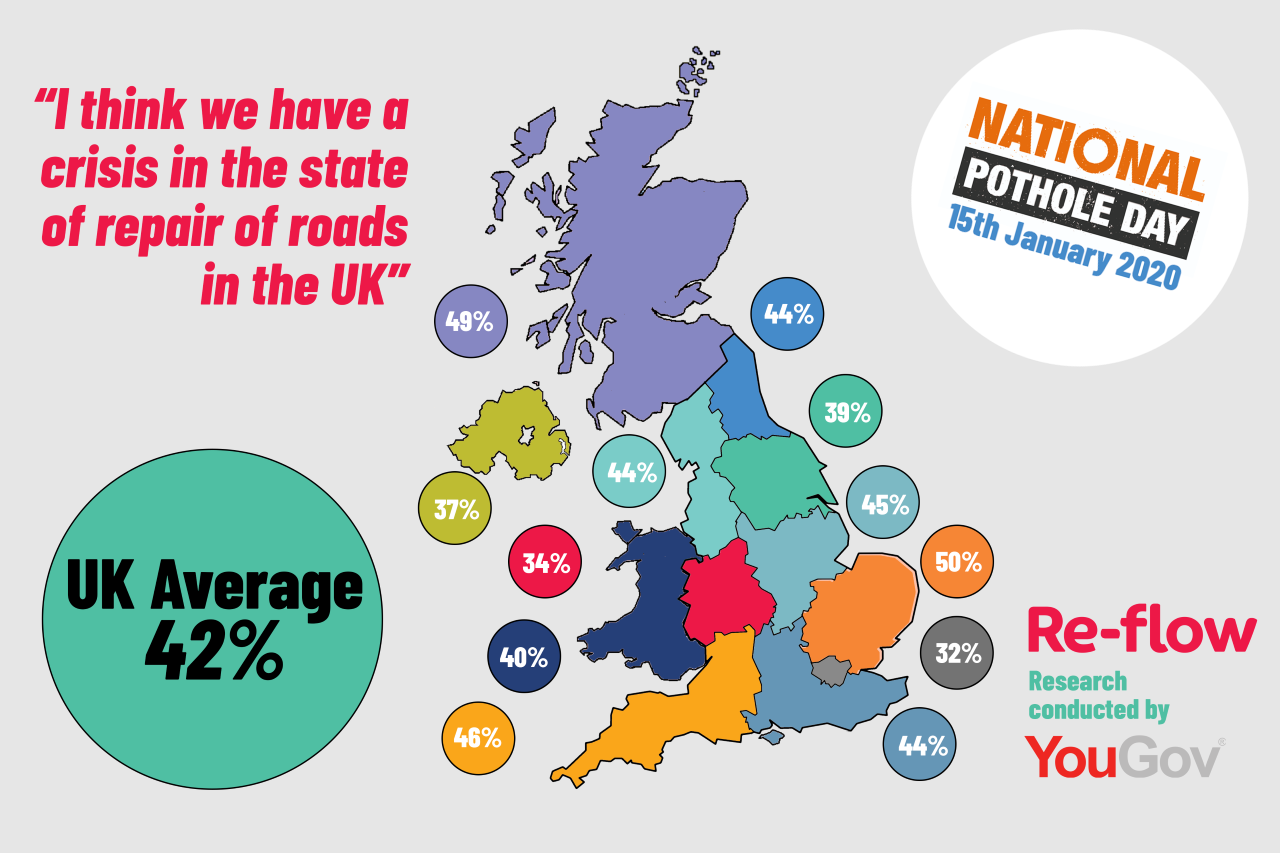 As we have just passed the 5th Annual ‘National Pothole Day’ on 15th January in the UK, a poll shows almost half of UK residents think the state of repair in UK roads has reached ‘crisis’ point.

National Pothole Day is about focusing attention on the poor state of our local road network. The public opinions outlined through YouGov research conducted on behalf of the Highways job management solution, Re-flow, reinforce the critical need to address our decaying road network.

Local Authorities need to do more to ensure they are addressing this national crisis, with 50 per cent of the population in some parts of the country saying they think we are at crisis point.

In the shock poll of the UK population conducted for Re-flow by YouGov last week, 42 per cent agree ‘I think we have a crisis in the state of repair of roads in the UK’, which goes up to 50 per cent in the East of England and a low of 32 per cent in London.

Furthermore, when asked if they think ‘the bad conditions of roads in the UK constitutes a national emergency (e.g pot holes, cracks, poor drainage etc.)’ 31 per cent of the UK population agreed with this view, with a high of 36 per cent in the West Midlands and a low of 24 per cent in London.

Looking at funding of the UK roads infrastructure, with London receiving more than any other region, satisfaction in local roads can in many ways be directly attributed to funding levels. However, Re-flow research in 2019 found that the Highways sector felt that, aside from more funding, the best things that would help reduce the one-time catch-up cost to get our roads fully functional and maintained were as follows:

Mike Saunders, managing director of Re-flow commented: “The challenges being faced by the industry in terms of being more innovative with the design, construction and maintenance of the network are ever-present, so those working in the sector must come up with new ways to do more to make the most of the funding they receive, as a sustained lack of investment is set to continue in the foreseeable future.

“The current system of trying to keep on top of patching up the potholes instead of investing in proper resurfacing is making roadworkers more like firefighters.”

The 2019 Annual Local Authority Road Maintenance (ALARM) survey, produced by the Asphalt Industry Alliance, shows that on average, UK roads are only resurfaced every 67 years, with an annual carriageway budget shortfall of £657m. Every year we have the same news cycle of these reports, coupled with the ‘pothole season’ coverage, but another finding of Re-flow’s survey from YouGov found that only 8 per cent of the UK population agree that they think the media portrays an unfairly negative representation of the state of roads in the UK.

Mike Saunders continued; “With such stinging criticism of the road network from the taxpayer, events like National Pothole Day are a vital date in the calendar to generate support and give visibility to the consensus of disapproval in the state of our roads.”

Ford Puma Crowned 2020 What Car? Car of the Year