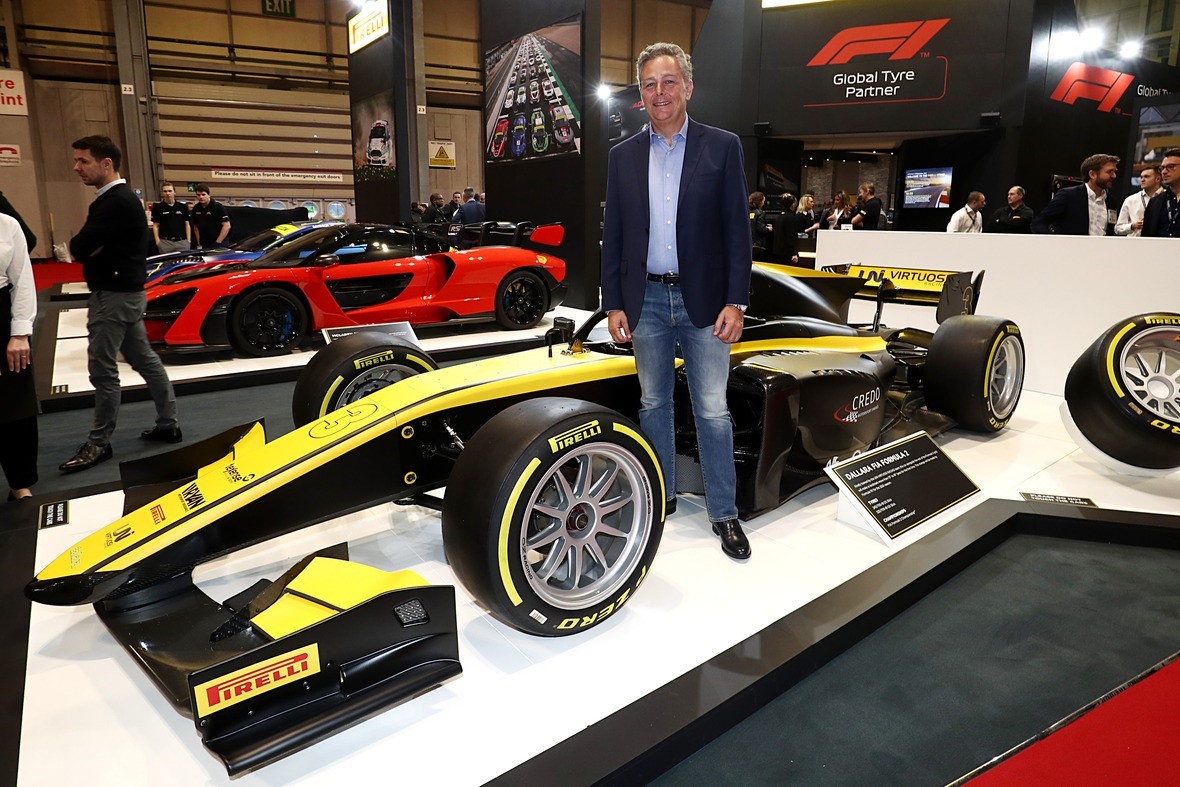 Formula 2 is already established as the place to watch the Formula 1 drivers of tomorrow. In 2020, the championship will also be home to a new technological innovation as it adopts 18-inch tyres from Pirelli: the same size that will be raced in Formula 1 from 2021 onwards.

Pirelli has been showing its new 18-inch Formula 2 tyres at Autosport International 2020. With Formula 2 is already established as the place to watch the Formula 1 drivers of tomorrow. In 2020, the championship will also previews the same size tyres that will be raced in Formula 1 from 2021 onwards. Although the new tyres have already been seen in private testing, people visiting the show were the very first to see how they look in their final Formula 2 version, complete with Pirelli’s famous coloured stripe sidewalls.

Mario Isola, Pirelli’s head of F1 and car racing, was on hand to unveil the tyres and talk about the significance of the change from the previous 13-inch size. The introduction of 18-inch tyres to F2 a year before F1 is a novel initiative, and a beneficial move on two distinct fronts. On one hand, it will help Pirelli’s engineers to learn more about the larger size as the company prepares to supply F1 from 2021. And on the other hand, it will give the F2 drivers experience of the characteristics of tyre that they could be racing on if they make it to F1 in the future.

Pirelli has supplied F2, and its predecessor GP2, since 2011: the same year that the company returned to F1. Helping to prepare young drivers for F1 has always been a key part of Pirelli’s agreement to supply the championship. This has included developing tyres that feature a degree of deliberate degradation to help the drivers learn about tyre management. Drivers also have to use two different compounds of tyre during their feature races, just as is the case in F1.

As Isola explained, introducing 18-inch tyres to F2 will provide the drivers and teams with additional challenges for the 2020 season, because the change in size is a lot more than simply a cosmetic difference. While the rims are larger, the tyres themselves have a smaller sidewall, and that will naturally lead to quite different characteristics. Teams will need to gather new data and even drivers with previous F2 experience will have to master the new characteristics of the latest tyres. A full testing campaign last year proved that the latest rubber is up to the job – now it’s down to the drivers and teams.

The changes brought by the move to 18-inch tyres will be just one of the reasons to watch Formula 2 in 2020. The three rookies who lit up Formula 1 last season – George Russell, Lando Norris and Alex Albon – were the top three finishers in F2 the previous year. And the 2020 F1 grid’s only debutant, Nicholas Latifi from Canada, was F2 runner-up last season.

This year promises another exciting F2 field, which includes no fewer than five up-and-coming racers who form part of the famous Ferrari Driver Academy. Among them is Mick Schumacher – son of seven-time F1 world champion Michael – and the reigning FIA Formula 3 Championship winner, Robert Shwartzman.