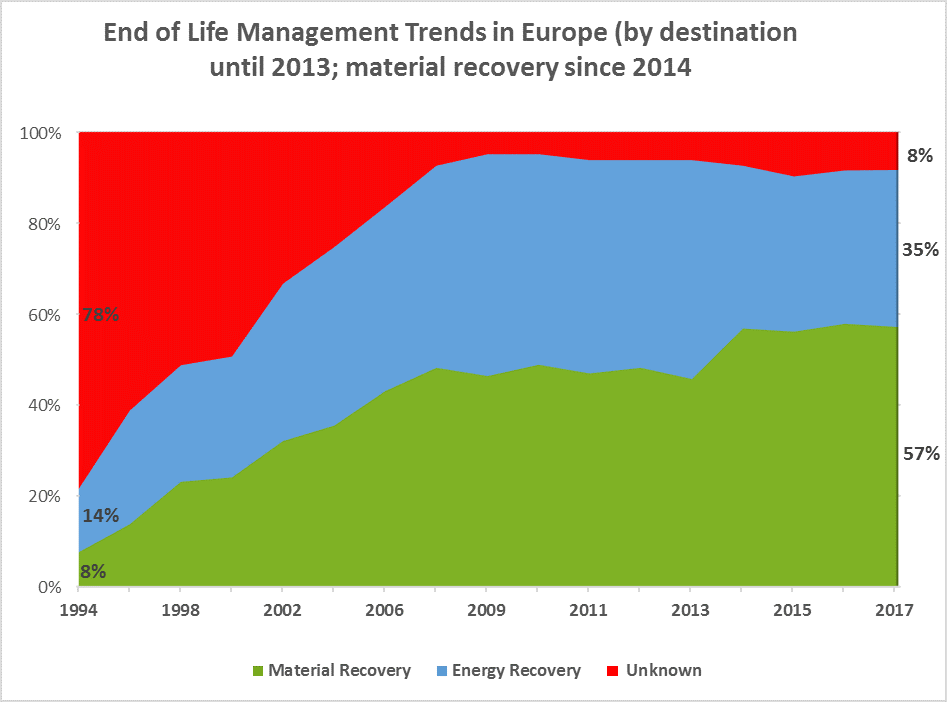 92 per cent of end of life tyres (ELTs) were collected and treated for material recycling and energy recovery in 2017, according to data covering 32 European countries, consolidated by the European Tyre and Rubber Manufacturers’ Association (ETRMA). This figure shows continuity with previous years’ data, which fluctuates between 93 and 95 per cent. The remaining 8 per cent could not be tracked, ETRMA states. The figure includes data from the 28 countries in the European Union, plus Norway, Serbia, Switzerland, and Turkey.

ELTs are collected and their treatment is organised across European countries, the vast majority operating under EPR. Secondary raw materials from ELTs are important resources for industries such as construction, automotive and cement. The detailed analysis of the data shows that, compared to the previous year, the number of ELTs in Europe (3.4Mt) in 2017 increased by about 4 per cent on the previous year.

About 1.96 million tonnes of tyres were treated through material recovery. This figure includes 1.47 million tonnes, sent to granulation process to obtain the three main components of the tyre: rubber, steel and textile; 326.000 tonnes of ELTs were incorporated in cement, resulting from the co-processing of tyres in cement kilns; 105.000 tonnes were used as element in civil engineering applications. Some other minor applications in processes such as pyrolysis, steel mills and foundries, and other uses account for the remainder.

The management of ELTs in 2017 is completed with a 1.18Mt of tyres that went through energy recovery, mainly in cement kilns (83 per cent), and complemented with their use in urban heating and power plants (17 per cent).

The quantity of ELTs, stocked or unknown, and waiting for treatment, is slightly above the previous year’s figures by 50,000t. The ETRMA states that this is because of the implementation of new regulations in some countries and the obligation of collection and treatment of a higher percentage in others, which has given the result of higher quantity of tyres waiting for treatment.

The ETRMA added that “the European tyre industry is committed to an innovative and sustainable economy.”