You are here: Home1 / News2 / Company News3 / 1 in 4 cars leave forecourts with MOT advisories that could pose danger... 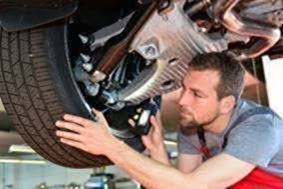 New data from Protyre reveals that more than one in four vehicles with a valid MOT leaves the forecourt with serious advisories that could result in a fine of up to £2,500 if not addressed in a matter of weeks. The analysis by the UK’s fastest growing supplier and fitter of tyres and automotive services with 150 nationwide garages highlights that this could apply to up to 9,550,000 vehicles on the road today, as there are an estimated 38.2 million registered vehicles in Britain according to the Department for Transport.

The most common serious MOT advisory according to the new Protyre data is tyres and brakes, with nearly 1 in 6 drivers who pass their MOT leaving the forecourt with advice from engineers to have them fixed soon. 1 in 7 also have an advisory for their vehicle’s suspension and just 1 in 45 for their lamps. Once unroadworthy and discovered by authorities, driving a vehicle with defective tyres, brakes or with unfit parts that could cause danger is punishable with a fine of up to £2,500 and 3 penalty points. 12 per cent of drivers with advisories have at least two off the back of their MOT – and 4 per cent have more than three, meaning that if left unfixed they could potentially be liable for multiple fines or penalty points on their driver’s license.

Protyre also crunched the figures to reveal how drivers of different car brands fare against each other:

Protyre’s national retail operations manager, David Sholicar, comments: “Most drivers breathe a sigh of relief when their car passes its MOT, but the advisories are a warning that your vehicle could still become unroadworthy in a matter of weeks if you ignore them. For example, a tyre advisory could be because the tread is nearing the 1.6mm minimum depth, or the tyres may have cracking due to the tyres’ age, or a brake advisory could be because the brakes are nearing the wear limit, or showing signs of deterioration – potentially posing a safety risk to driver and passengers.

Despite poor tyre maintenance and faulty brakes being the top two most common reasons for vehicle accidents in Britain, they are the most common advisory for cars that pass their MOTs. Some research even suggests that as many as half of British drivers even ignore warnings of a faulty car part until payday.”