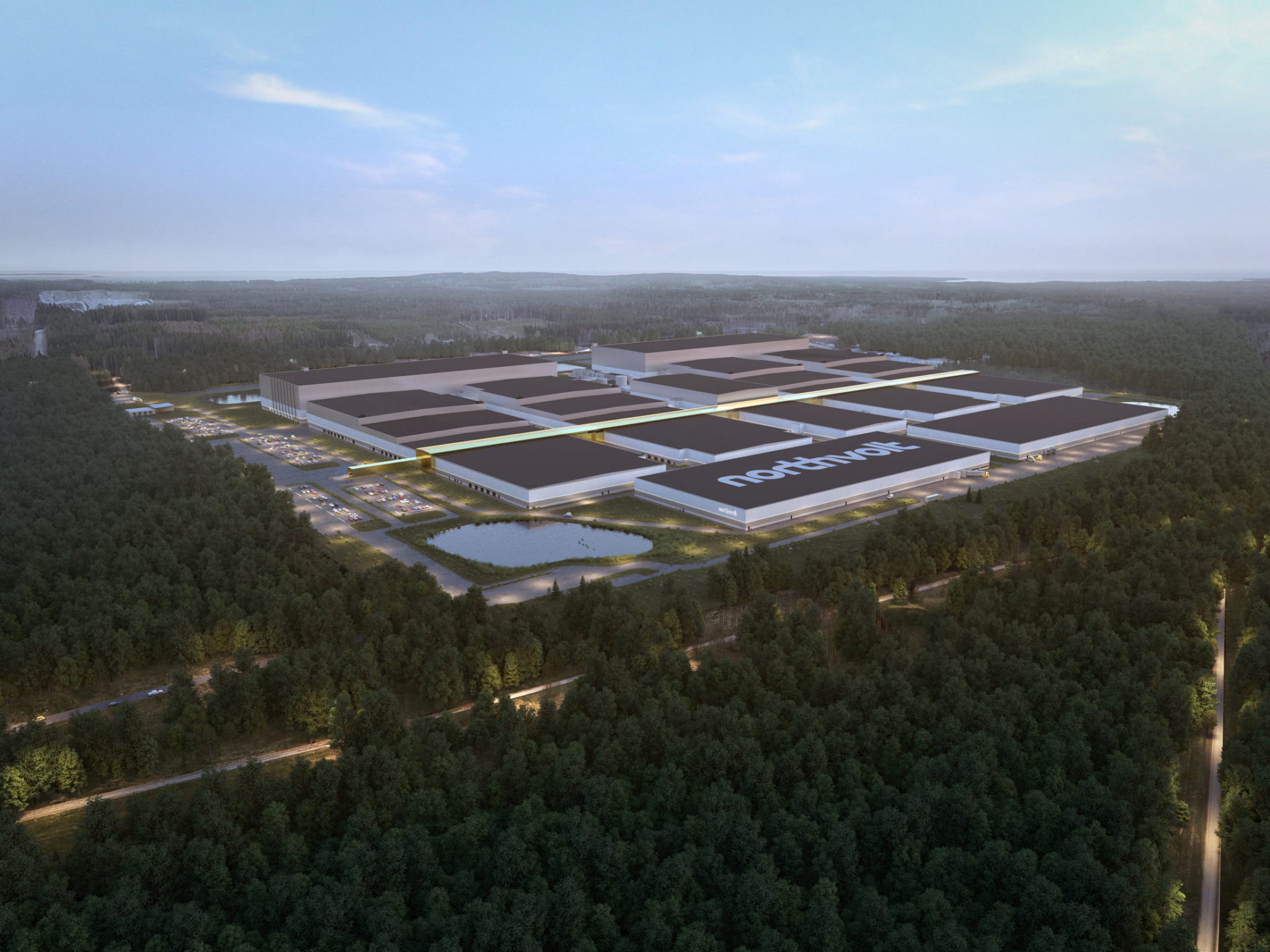 Britishvolt appears to be a similar scale to Northvolt (pictured), which raised US$1 billion of capital to build Europe’s first homegrown gigafactory for lithium-ion battery cells - Northvolt Ett, in Skellefteå, Sweden

Northvolt has raised US$1 billion of capital to build Europe’s first homegrown gigafactory for lithium-ion battery cells – Northvolt Ett, in Skellefteå, Sweden. At the same time, in cooperation with the Volkswagen Group, the company also announced plans to establish a second gigafactory with an intended location in Lower Saxony, Germany. The news of both factories was announced on 12 June 2019.

Volkswagen Group together with funds managed by the Merchant Banking Division of the Goldman Sachs Group, Inc will lead the equity fund raising alongside equity being provided by the BMW Group, AMF, Folksam Group and IMAS Foundation. The transaction is subject to approval from the Swedish Competition Authority.

As previously announced, the European Investment Bank has approved in-principle a $400 (€350) million loan as a part of the total funding for Northvolt Ett. Together with additional debt being raised, the establishment of the initial 16 GWh of lithium-ion battery cell manufacturing capacity at Northvolt Ett is enabled. Building construction work will commence in August with large-scale production estimated to begin in 2021.

In addition to the gigafactory in Sweden, Volkswagen and Northvolt plan to set up a 50/50 joint venture to establish a 16 GWh battery cell factory with an intended location in Salzgitter, Lower Saxony, Germany. Volkswagen is investing around $1 billion (€900 million) in joint battery activities with Northvolt. A part of the amount is intended for the joint venture, another part of the total amount will be invested directly in Northvolt. The production facility is scheduled to start manufacturing battery cells for Volkswagen from late 2023 or early 2024 and could be increased to 24 GWh over the following years.

“Today is not only a great milestone for Northvolt, it also marks a key moment for Europe that clearly shows that we are ready to compete in the coming wave of electrification, and that we will do so using battery cells which carry the lowest CO2 footprint possible,” said Peter Carlsson, co-founder and CEO of Northvolt, adding:

“With these world-class financial and industrial partners coming together and getting behind our mission, we see a tremendous opportunity and momentum for further capacity expansion and product innovation over the coming years. This is only the beginning”.

Dr. Stefan Sommer, Member of the Volkswagen AG Board of Management responsible for Procurement, commented: “Volkswagen is laying the groundwork at all levels for the successful implementation of its electrification strategy. With Northvolt, we have found a European partner whose know-how and sustainable, CO2 optimized battery cell production processes will enable us to advance cell production here in Germany. The prerequisite for this is, of course, the creation of the political framework.”

Michael Bruun, Managing Director at Goldman Sachs, commented: “The transition to a clean energy future in Europe relies on sustainable and cost-effective battery cell production. Northvolt has developed industry-leading technology and processes which position it to play a crucial role in European supply in the coming years. We are pleased to be partnering with industrial and financial investors and backing a world class management team executing on an ambitious growth strategy.”

Over the last few years, Europe has witnessed remarkable growth in demand for domestic cell capacity driven by the industrial transition towards electrification. After entering a number of supply agreements, a significant share of the production volumes from Northvolt Ett has been sold to key customers, amounting to a combined order value of over $13 billion through 2030. There is even talk of the UK becoming a battery production hub of the future. Indeed, Borish Johnson even called the UK a battery technology leader during his Conservative Party leadership bid launch speech.

Since its official launch in March 2017, Northvolt has grown from 12 to almost 300 people, and now employs over 45 different nationalities from companies such as Tesla, Daimler, LG Chem, Panasonic, Spotify and Google. In 2018, Northvolt delivered its first product – a battery pack – to Epiroc’s fleet of underground mining machines, as well as produced its first battery cell. Currently, the company has an operational research lab and two cell factories under construction in Sweden – Northvolt Ett in Skellefteå and Northvolt Labs in Västerås – as well as one battery systems factory in Gdańsk, Poland, already in production.