Everyone’s a winner – 5 enduro tyres put to the test 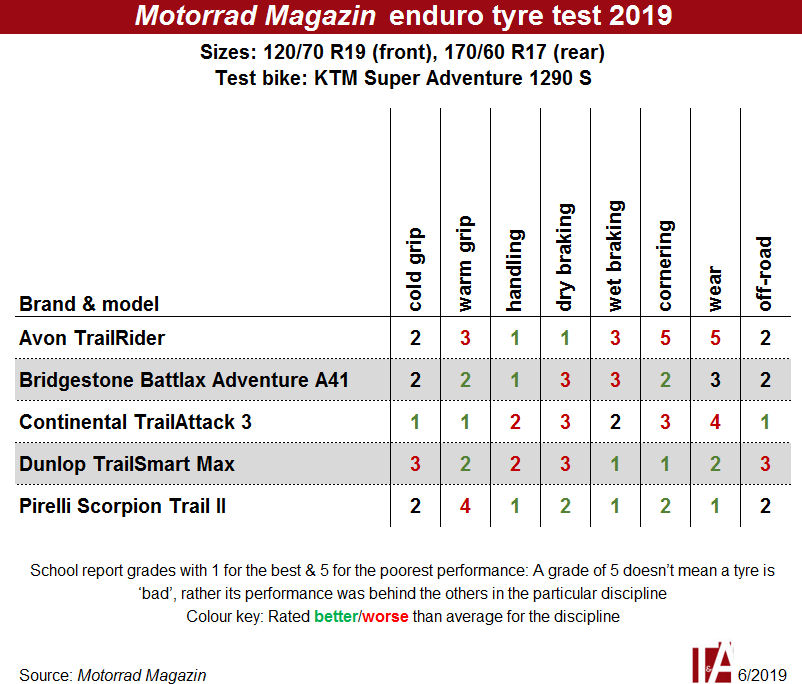 The aim of magazine tyre tests is to inform consumers about product performance, and this is typically quantified in a point score that results in a winner. But the best tyre – for you – is the one that most closely meets your individual priorities and driving style. Recognising this truth, Austrian motorcycling magazine Motorrad Magazin refrained from crowning any particular tyre victor in the test of five enduro tyres published in its current (5/2019) issue.

Instead, the publication gave each tyre ‘school report’ grades for individual characteristics, such as cold and warm grip, handling, braking on wet and dry surfaces, off-road performance and wear. The best pupils were given a grade of 1, others a grade between 2 and 5. Motorrad Magazin stresses that a low grade doesn’t necessarily indicate that a tyre has clear shortcomings in a specific discipline, merely that its performance lagged behind its rivals.

Schools don’t tot up school report grades to name the “best” pupil, and Motorrad Magazin doesn’t want us to do this with the tested tyres, either: “By no means should the sum of these grades be taken in order to determine some kind of overall winner. Not every individual discipline carries the same importance and, for example, there is only a few percentage points between the tyres in the braking on dry asphalt (test),” writes the publication to explain why it didn’t name one of the five the overall winner. The importance of not reading too much into individual results was underscored when the testers measured cornering force, a characteristic they commented was “not easy” to quantify.

Those who ignore the magazine’s advice and calculate an average overall score would hand the victor’s wreath to Pirelli. The Scorpion Trail II achieved an average grade of 1.9, two-tenths of a grade better than the Continental TrailAttack and Dunlop TrailSmart Max. The same method of calculation would give an overall grade of 2.3 for the Bridgestone Battlax Adventure A41 and 2.8 for the Avon TrailRider. But – we need to say this again – Motorrad Magazin’s testers say they’d prefer readers “decide for themselves which tyre is best suited to their personal purposes based upon our detailed evaluation.”

What information then can we glean from the results? The Scorpion Trail II provided the best handling of the five tested tyres and, along with the Dunlop TrailSmart Max, gained the highest grade for wet braking. The Pirelli tyre was also the best when it came to wear – it was only half-worn when the Avon TrailRider was at the end of its service life.

The Continental TrailAttack 3 (which gave a comparatively poor performance in the wear discipline) was judged the tyre of choice “when looking at sporty performance and controllability on both asphalt and off-road surfaces.”

The Avon TrailRider gave a midfield performance in the wet braking discipline but excelled at dry braking. Bridgestone’s Battlax Adventure A41 achieved the highest grade for the handling discipline, but failed to impress with its stopping distances in wet and dry conditions.