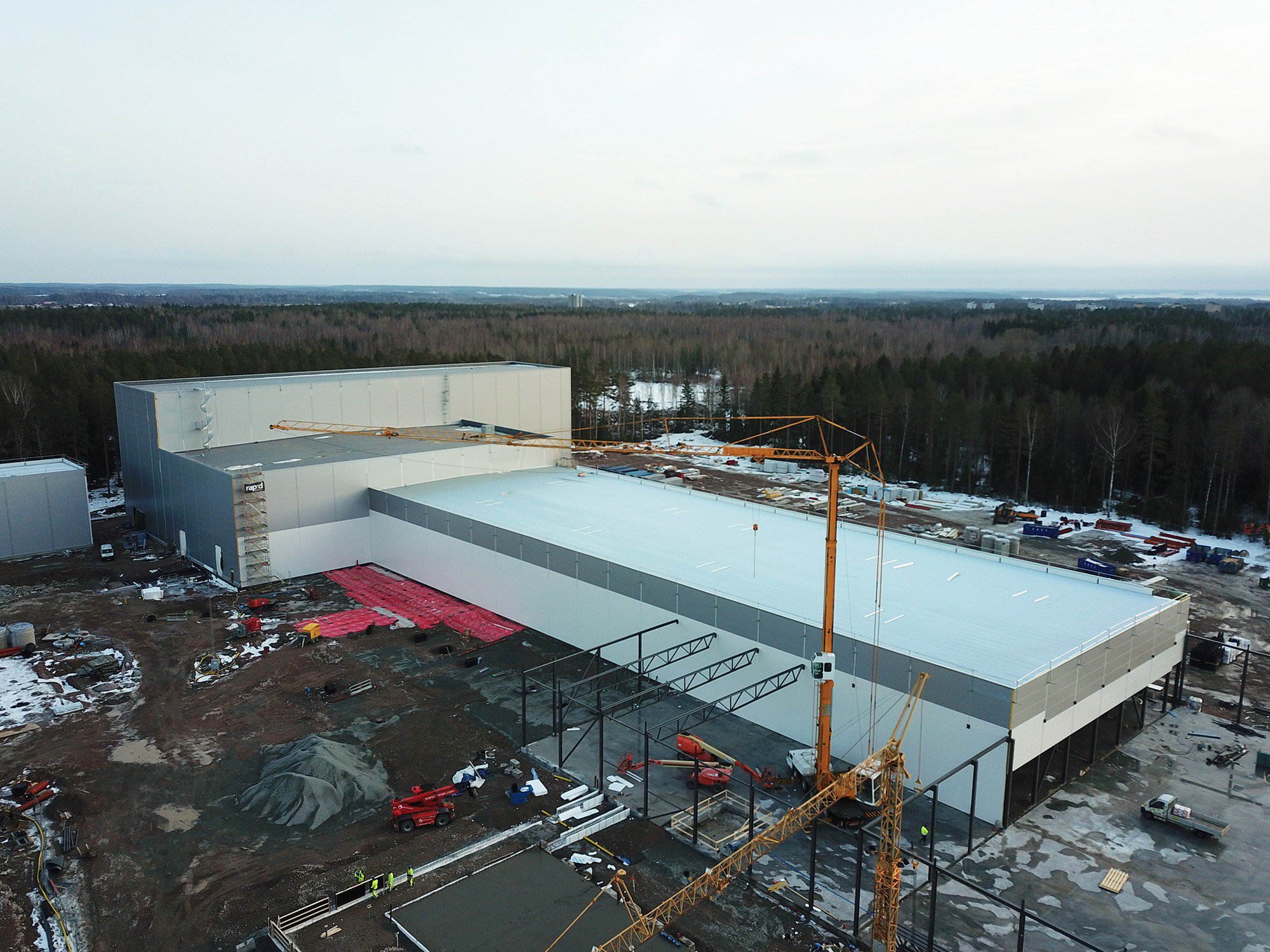 As a first step towards the establishment of the firm’s new battery factory, in April 2018 Northvolt broke ground on the construction of Northvolt Labs located in Västerås outside of Stockholm. Here is how progress looked at the end of February 2019

The Volkswagen Group and further European partners are joining forces to form the European Battery Union (EBU) with a view to forging ahead with battery research throughout Europe. The new consortium is to be led by the Volkswagen Group and the Swedish battery producer Northvolt. The joint research activities of the European Battery Union will cover the entire battery value stream – from raw materials through cell technology to recycling. The prime objective is to accumulate much broader know-how on battery cell production.

All the partners will step up their investments as a result of the planned additional research activities. These investments could receive financial support from funding announced by the German Federal Ministry for Economic Affairs and Energy.

All the results of research work by the European Battery Union will be exchanged between all the partners across national borders. The joint research activities are to start at the beginning of 2020.

The news follows the fifth meeting of the European Battery Alliance (EBA), which took place in Brussels in January 2019.
Here some 200 stakeholders from across the European battery industry gathered to discuss plans for the future of the European value chain for lithium-ion batteries.

In his opening remarks, keynote speaker Maroš Šefčovic (Vice-President of the European Commission in charge of the energy union), who launched the EBA in October 2017, pointed out how far Europe has come since the launch of the alliance, with a number of new projects already underway along the battery value chain.

“We have to do it together and we have to act now if we want to have battery production in Europe,” said Diego Pavia, CEO of InnoEnergy, in opening the EBA meeting’s high-level workshop.

The EBA has partnership at its heart and Northvolt already had industrial partnerships with the likes of ABB, Scania, Vestas, BMW and others before the VW announcement.

For its part the EBA is described as “a cooperative platform gathering together the European Commission, the European Investment Bank, industrial stakeholders, interested EU states, and a wide number of forward-thinking, innovative actors.”

In June 2018 Northvolt received the environmental permit for the establishment of Europe’s largest lithium-ion battery cell factory (at least until the other planned gigafactories contest this). Construction got underway shortly afterwards.

The factory is being built in the municipality of Skellefteå in the north of Sweden. The environmental permit, which covers both construction and operation, was granted by the Land and Environment Court in Umeå less than six months after the final application was submitted. The permit was issued for the first section of the factory that will be completed in 2020 and produce eight GWh cell capacity annually. The full factory will be ready in 2023 and produce at least 32 GWh annually when it reaches full-scale capacity.

The first phase of the construction, which primarily consists of ground preparations, is estimated to be completed during the second half of 2019. Northvolt has initiated a process to support the funding required for investments in buildings, materials and equipment that will take place in the next phase until the first part of the factory is completed in late 2020.

According to the company, the lithium-ion battery cell factory in Skellefteå will produce the world’s greenest battery, with a minimal carbon footprint and the highest ambitions for recycling, to enable and accelerate the European transition to renewable energy.

As a first step towards the establishment of the new factory, in April 2018 Northvolt broke ground on the construction of Northvolt Labs located in Västerås outside of Stockholm. Northvolt Labs is a scale-up line and research facility used to develop, test and industrialize lithium-ion battery cells before large-scale production. It will start production in 2019.

In addition and with a view towards sustainability, Northvolt’s collaboration with the Industrial Materials Recycling group at Chalmers University, centres on developing technology to develop and implement a sustainable solution for a large-scale battery recycling with low environmental impact utilizing hydrometallurgical techniques.

“With some 11 million tonnes of batteries expected to be discarded by 2030, this is an opportunity we cannot afford to miss,” comments Emma Nehrenheim, Northvolt’s Chief Environment Officer.

“It is therefore key that the EU and the industrial companies involved throughout the value chain work together to create a framework that encourages recycling and recovery efforts in the coming years as European battery production ramps up production.”