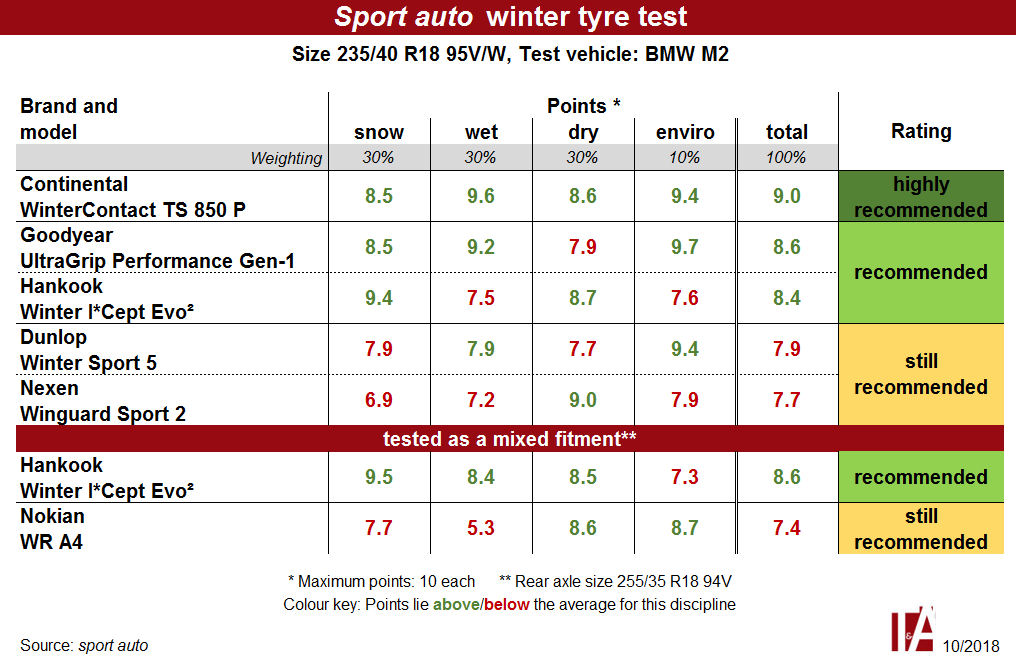 If I were a winter tyre developer at Continental, I’d be getting smug by this point in time. The brand can boast yet another tyre test win, this time with sport auto. The German performance car magazine has named the WinterContact TS 850 P victor of its six-brand test.

Sport auto primarily focused upon size 235/40 R18 95V/W tyres during testing, however additionally tested two brands – Hankook and Nokian – with mixed front and rear sizes, fitting 255/35 R18 94V rubber at the back. The aim of the mixed test was to measure differences in performance between the two configurations, and sport auto tester Thiemo Fleck commented that “with only a few exceptions in the test disciplines, the wide hind quarters really did increase traction and driving stability.”

Yet Fleck also pointed out that it takes more than just width to determine a tyre’s characteristics in various weather conditions. Indeed, the Continental tyre can credit its win to reliably good performance on a range of surfaces. It may have taken second place to the Hankook I*Cept Evo² in the snow disciplines due to “small slippage reserves and just undistinguished lateral control on snow” but this criticism aside, the Continental WinterContact TS 850 P was declared a “well-behaved understeering (tyre) on snow, phenomenally safe and precise to drive in the wet, balanced in dry curves.” As such, it was the only tested tyre to gain a ‘highly recommended’ rating.

Runner-up the Goodyear UltraGrip Performance Gen-1 and third-placed tyre the Hankook I*Cept Evo² were rated ‘recommended’; the Hankook rubber gained this rating both when the testers BMW M2 wore the size 235/40 R18 95 on all four wheels and when tested as a mixed fitment. When put through its paces with the wider 255/35 R18 rear tyre, the Hankook achieved a slightly higher final score and finished in joint second place with the Goodyear all-round 235/40 R18 fitment.

The UltraGrip Performance missed out on a better rating primarily due to an “imbalance between forwards and sideways grip on snow.” On the positive side of the equation, the Goodyear tyre offered good traction and braking on snow and also demonstrated safe, precise and sporty characteristics in the wet and dry.

Along with the slight shortcomings noted for the Hankook tyres in both size configurations, when testing the I*Cept Evo² in the narrower size on all four wheels the sport auto testers also observed “measurably weaker lateral control and traction.” Nevertheless, the Hankook tyre was feted for its short braking distances and dynamism on snow and in the wet and dry.

The Dunlop Winter Sport 5 and Nexen Winguard Sport 2 were only tested in 235/40 R18 and both were rated ‘still recommended’. The Dunlop tyre was credited with “good longitudinal dynamics” and “excellent “aquaplaning safety,” while the Nexen candidate offered “decent performance with good feedback in the wet” as well as sporty performance and “strong braking on dry asphalt.” It wasn’t all good news, though: The testers encountered a slight weakness in the Winter Sport 5 when it came to sideways control and traction on snow, and sharp wheel spin and mediocre wet handling were also issues. The Nexen didn’t win the testers over in the snow disciplines, and the testers found its wet performance imbalanced.

The Dunlop and Nexen tyres were followed by the Nokian WR A4, which also finished the test with a ‘still recommended’ rating. The Nokian tyre was only tested as a mixed fitment. “Reliable to drive in spite of shortcomings in traction and lateral control on snow” was the testers’ comment to the WR A4, however they also observed “weaknesses in all wet disciplines” and therefore handed the Nokian tyre the wooden spoon. “Nokian slips up in the wet. A no-go, as rain is the snow of Central European winters,” wrote sport auto tester Thiemo Fleck.