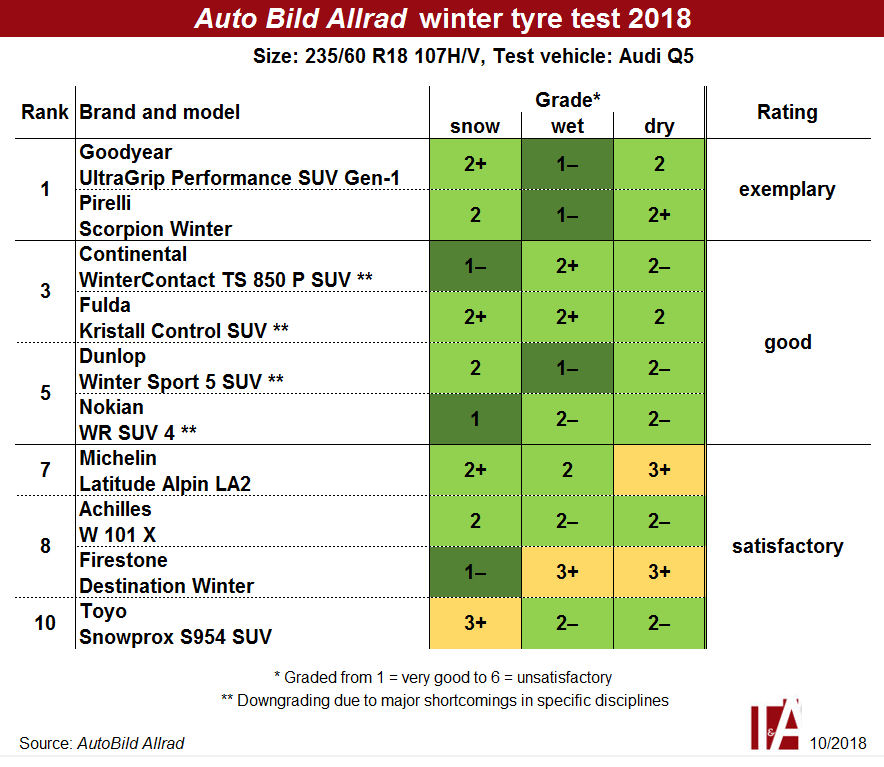 Ten winter SUV tyres – from premium brands to a so-called “budget tyre from the Far East” – were put to the test in this year’s comparative evaluation from Auto Bild Allrad. The German 4×4/SUV publication examined size 235/60 R18 107H/V products, fitting the tyres to an Audi Q5 for testing in wet, dry and snow disciplines. Happily, the testers found no truly dreadful tyres within the candidates’ ranks.

All podium places were occupied by premium brands. The Goodyear UltraGrip Performance SUV Gen-1 and Pirelli Scorpion Winter were declared joint winners, both earning an ‘exemplary’ rating for their efforts. The Goodyear tyre was commended for its “outstanding handling qualities in all weather conditions, direct responds to steering commands, short braking distances and moderate pricing,” while the Pirelli was praised for “balanced good performance at the highest level, dynamic handling qualities, precise steering response” in combination with low rolling resistance. Yet neither tyre was entirely without blemish: Tyre/road noise was slightly elevated for the UltraGrip Performance SUV, and the testers singled out the Scorpion Winter’s high purchase price.

Third place went to the Continental WinterContact TS 850 P SUV. The testers noted that this tyre was held back from a better rating by a slightly extended braking distance in the dry. That withstanding, the Continental tyre was deemed a “winter specialist with convincingly good driving performance on snow and ice, dynamic-sporty wet handling and fuel-saving rolling resistance.” It received a ‘good’ rating.

Next came the Fulda Kristall Control SUV. Its relatively affordable purchase price put it in good stead with the Auto Bild Allrad testers, and they also found the tyre to have “very good snow traction” and “high reserves of aquaplaning safety.” On the flipside, they experienced understeer in the snow with the Kristall Control SUV.

Shared fifth place belonged to the Dunlop Winter Sport 5 SUV and Nokian WR SUV 4. The former offered “dynamic, sporty wet handling, short wet braking distances and high aquaplaning safety,” however lateral control on packed snow showed room for improvement and the Dunlop tyre came at a high purchase price. The WR SUV4 was credited with “outstanding driving characteristics on snow and ice” as well as “low rolling resistance,” yet the Nokian tyre also showed a slight tendency to understeer in the wet and dry and its dry braking distance was a little on the long side. Both tyres received a ‘good’ rating.

“Stable, safe driving characteristics on snow and wet roads, good steering response” were the comments made in support of the Michelin Latitude Alpin LA2. Ranked 7th from ten, the tyre was chastised for its extended braking distances in the dry and increased rolling resistance. Purchase price was also high. The Michelin tyre was rated ‘satisfactory’.

Following in joint 8th place was the “budget tyre” – the Achilles W 101 X from Indonesian manufacturer Multistrada – as well as the Firestone Destination Winter. The Achilles tyre couldn’t keep up with the top-ranked tyres, yet Auto Bild Allrad testers Henning Klipp und Dierk Möller considered it “not at all bad.” They judged the W 101 X a balanced tyre in spite of issues with understeer in the wet, delayed steering response and elevated rolling resistance. Purchase price was also a plus, with the Achilles tyre costing only a little more than half as much as the Pirelli Scorpion Winter, the most expensive tyre in the test.

The Destination Winter gave a good account of itself in winter conditions but showed weaknesses in the wet handling disciplines. Auto Bild Allrad also observed “extended braking distances on wet and dry surfaces” as well as undistinguished ride comfort. The Achilles and Firestone tyres both gained a ‘satisfactory’ rating.