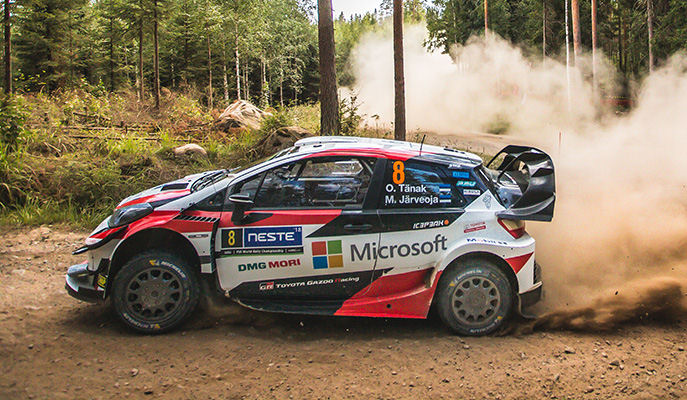 Michelin chose the fastest round of the 2018 FIA World Rally Championship to launch its latest range of WRC gravel tyres. For the first time since 2011, the tyre maker’s partners were able to select two compounds from a choice of three options, namely the existing H4 (hard compound) version of the Michelin LTX Force tyre, along with the new S6 (soft) and M6 (medium) variants.

The 2018 Neste Rally Finland took place on a course notorious for its soft ground and high speeds and was consequently a landmark event inasmuch as the Michelin’s WRC partners were able to fit either the Michelin LTX Force S6 tyre or the LTX Force M6. WRC2 crews were given a choice between the Michelin Latitude Cross S80 (soft) and Latitude Cross H90 (hard) tyres.

This year’s Rally Finland route incorporated numerous changes, with two-thirds of the stage distance different to that used last year and 40 per cent that had either never been visited previously or else was completely new for the current-generation drivers. The event itself was again based in Jyväskylä (around 200 miles north of Helsinki) and featured a menu of three loops comprising 23 forest stages and a total competitive distance of 197.14 miles kilometres out of an overall distance of 887 miles.

“The new Michelin LTX Force S6 tyre and Michelin LTX Force M6 tyre were successful out of the box,” reports Arnaud Rémy, manager of Michelin’s programmes. “The pre-Rally Finland testing we carried out with our partners suggested that these two new compounds would be strong and that initial impression was confirmed on the rally itself. Given the weather and the fact that, in the end, conditions stayed dry from start to finish, competitors predominantly opted for the M6 version of the LTX Force which was widely praised for its versatility. Wear rates varied as a function of the different cars and driving styles but the performance it delivered was extremely high and that’s especially remarkable given how hot the weekend proved.”

In WRC2, the retirement of Rovanperä and Veiby handed the class win to Finns Pietarinen/Raitanen (Skoda Fabia R5) who currently top the Finnish Rally Championship. They were joined on the podium by fellow Finns Huttunen/Linnaketto (Hyundai i20 R5) and Britons Greensmith/Parry (Ford Fiesta R5) who ran both the soft-compound Michelin LTX Force S80 and the harder H90.

The next round of the 2018 World Rally Championship will take teams to Germany’s Trier region for the all-asphalt Rallye Deutschland on 16 to 19 August.