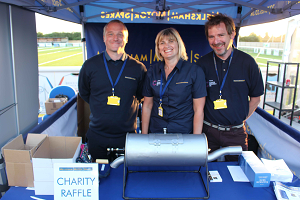 Attending technicians were given the opportunity to engage with over 50 suppliers of accessories, components, services, tools and garage equipment. With the emphasis on bringing Melksham’s supply base closer to garages, suppliers were encouraged to be both informative and entertaining, with many running engaging promotions and raffles.

The motor factor, with branches in Melksham and Frome, also had a dedicated tools and equipment area, aptly named “Tool Town” where garages could get to grips with the latest products from Melksham’s expanding supply base.

As supporters of the IAAF and the ‘Your Car Your Choice’ campaign, Melksham also welcomed IAAF’s membership development manager, Mike Smallbone, who was on hand to deliver a thought-provoking presentation on the threats and opportunities facing independent garages, now and in the future.

The 50th anniversary celebrations are continuing throughout the year, with monthly promotions and rewards for customers through a number of initiatives, plus fundraising in aid of Cancer Research UK, the company’s chosen charity for 2018, who were also represented at the event. The motor factor is also the official sponsor of the 2018 Formula Ford Championship at the nearby Castle Combe Race Circuit.

The event culminated in a huge charity raffle, raising money for 15 different charities nominated by Melksham staff. Melksham Motor Spares donated the three fantastic prizes; an air-conditioning service machine, Sealey tool chest and £1000 cash. The motor factor was thrilled with the response, raising nearly £6000 at the event and have decided to make up the total amount raised to £7500 to allow £500 to be donated to each of the nominated charities.

Phil Dodd, Melksham Motor Spares managing director, said: “We are very pleased we had such a high attendance at our 50th anniversary trade show. We continually invest in all areas of our business to ensure we’re at our very best and it’s great to see this recognition from garages when they show up in their hundreds to see the extensive range and selection of brands and products we have available. We also want to add a big ‘thank you’ to our suppliers and the Melksham team for their support and continued efforts in driving the business forward, throughout our 50-year history.”