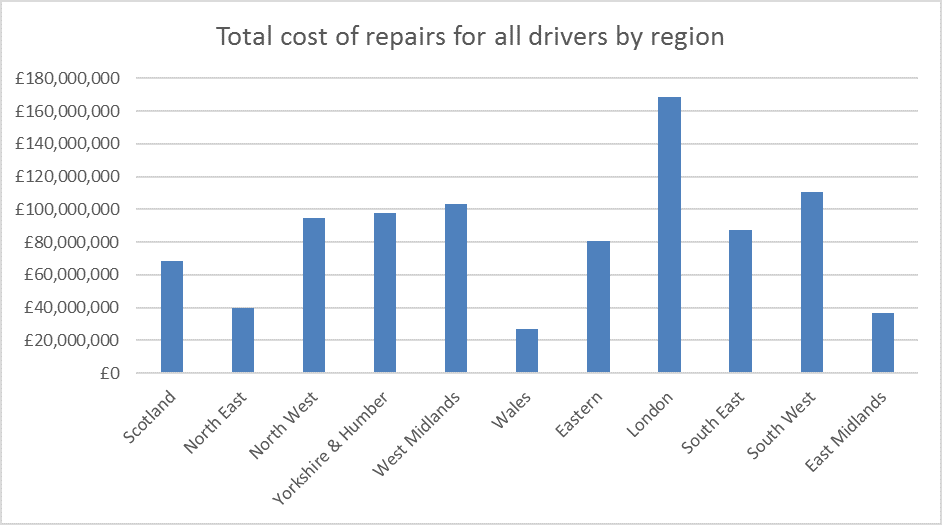 A survey performed for Kwik Fit indicates that the pothole problem is getting worse in the UK, a trend that will surprise very few people. Based upon feedback from 2,049 respondents, it has been determined that pothole damage to vehicles last year cost a total of £915 million to repair. This is 34 per cent more than the cost calculated from a similar survey two years ago – and the rise can’t be explained away by increasing repair costs.

The average cost of repairing damage to components including tyres, wheels, suspension and bodywork has risen only slightly – from £108.60 in 2016 to £111 this year. However, the number of drivers whose vehicles have suffered damage skyrocketed over the last 24 months from 6.3 million drivers a year to 8.2 million.

Of the 2,049 people surveyed by Walnut (formerly ICM) for Kwik Fit in February and March 2018, 70 per cent said they have hit at least one pothole a week over the last twelve months, and 25 per cent reported hitting one every single day. Drivers in the north west of the country have the worst experience, with 36 per cent of drivers suffering a pothole impact on a daily basis.

Drivers blamed their pothole incidents on a cocktail of factors. 88 per cent cited road or weather conditions, such as the pothole being hidden by a puddle or it being too dark to spot, but 47 per cent also said they had to make a deliberate decision to hit the pothole as avoiding it would have compromised their own safety and that of other road users. With surprising honesty, nine per cent admitted that the impact was their own fault, as they were either not paying attention to the road surface or driving too fast to stop in time.

A clear majority of survey respondents believe that the condition of UK roads is deteriorating, with 76 per cent saying that the road surfaces on their most frequently made journeys are in a worse condition than five years ago and 52 per cent saying they are significantly worse. This mirrors the findings of the newly-published ALARM report from the Asphalt Industry Alliance, which reveals that one in five local roads are now classed as ‘structurally poor’ – a 20 per cent increase on last year.

Kwik Fit says the condition of the road network is having an impact on driver behaviour, some aspects of which are likely to make the situation even worse. One in eight drivers say they take a longer route than the most direct journey as it has better road surfaces, thus adding unnecessary wear and tear to both road and vehicles, as well as using extra fuel. An equivalent of 1.5 million drivers say the poor road surfaces have caused them to switch their car to a more rugged vehicle such as an SUV or 4×4, while 1 million have bought a cheaper vehicle that they don’t mind getting damaged.

The impact on vehicles has also led to drivers changing their car maintenance habits. Five per cent of respondents shared that they buy cheaper tyres as the road surfaces damage them before the tread wears out. However, four per cent admitted doing precisely the opposite, buying more expensive tyres that are better at coping with the poor condition of the roads. Six per cent said they have left damage to their car unrepaired as they are sure it will get damaged again soon.

“The poor condition of the road network is hitting motorists’ wallets ever harder,” comments Roger Griggs, communications director at Kwik Fit. “Unfortunately, experience of past years has shown us that the recent cold weather will only make the problem worse and we are likely to see even more drivers suffering serious damage from impacts with potholes.

“It’s important to note that while sometimes a pothole will cause a blow out to a tyre, in many cases the damage is not immediately obvious,” Griggs continues. “Often a pothole can cause a slow puncture, bulge on the inside tyre wall or hairline crack in the wheel rim which only becomes evident days after the impact. If any driver is concerned about the potential damage which a pothole has caused, they can bring it in to one of our centres and we will put their car on a ramp and carry out a thorough inspection to put their mind at ease.”