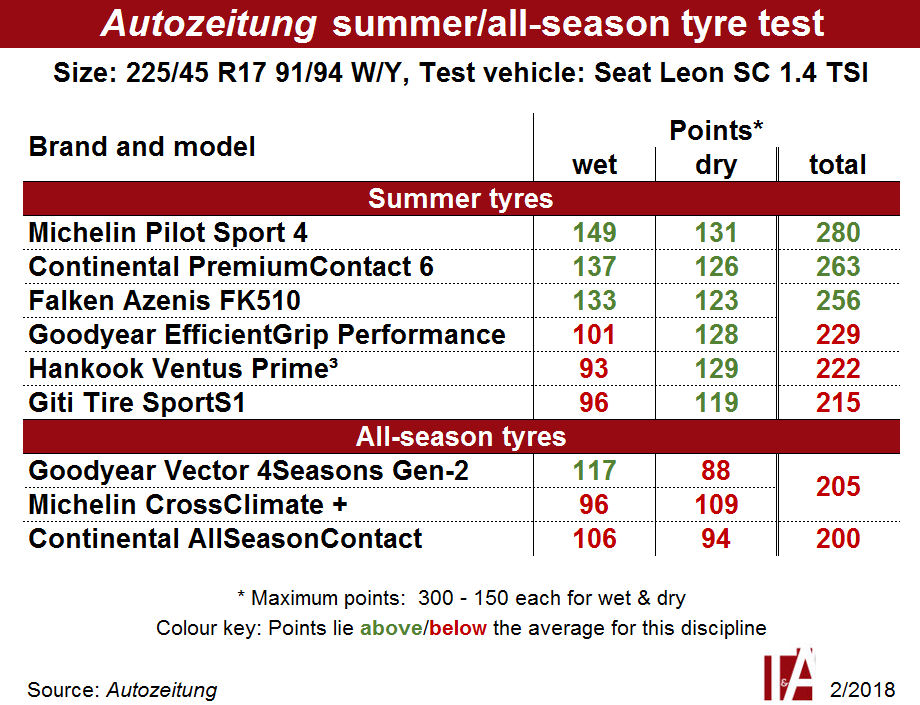 Another German car magazine’s summer tyre test has thrown in a handful of all-season tyres for good measure. Autozeitung evaluated a total of nine size 225/45 R17 tyres (W/Y speed rated and 91/94 load indices), six summer and three all-season products. Fitted to a Seat Leon, the tyres were tested in both wet and dry disciplines, with a maximum 150 points up for grabs in each of these.

The highest score amongst the summer tyres (and overall) was gained by the Michelin Pilot Sport 4, which finished the test with 280 out of a possible 300 points, while the summer wooden spoon went to the Giti Tire Sport S1, which collected a total of 215 points. Although last-placed amongst the summer tyres, the Giti tyre’s score was higher than the 205 points achieved by each of the all-season joint winners, the Goodyear Vector 4Seasons and Michelin CrossClimate +. The third and final all-season tyre was the Continental AllSeasonContact, which scored 200 points out of a possible 300.

This doesn’t seem very much, and when referring to the all-season candidates, Autozeitung brought the ‘c-word’ into play. “The test showed that all-season tyres are a compromise – but there are major differences,” wrote the publication’s testers. “For example, while the Michelin is strong in the dry (the testers describe its dry performance as “particularly impressive”), sacrifices must be made in the wet. Exactly the reverse applies with the Goodyear tyre, and the Continental represents a course midway between the two.” The all-season rubber did, however, offer one noteworthy advantage: “The tyres are admittedly also suitable for snowy surfaces where summer tyres are undrivable.”

The other participating Michelin product, the Pilot Sport 4 summer tyre, was crowned test winner and praised as being “top in the wet and dry.” That said, points were deducted for higher than expected rolling resistance. Second-placed tyre, the Continental PremiumContact 6, was found to be even-tempered on both wet and dry road surfaces, and it delivered the shortest wet braking distance and high tracking stability when changing direction on water-covered roads. Autozeitung gained a similar impression when testing the PremiumContact 6 in the dry, however the publication opined that improvements could be made to the tyre’s ride comfort. In third place was the Falken Azensis FK510, whose braking sensation and lateral support in the wet was only marginally inferior to that of the Continental tyre. The testers also found the Azensis FK510 to offer highly spontaneous steering behaviour in the dry as well as very good stability during abrupt lane change manoeuvres.

While the top three summer tyres were blessed with a ‘highly recommended’ rating, the remaining three had to live without such praise. The Goodyear Efficient Grip Performance gave the lowest rolling resistance of all tested tyres and performed well in the lateral aquaplaning test, however it was behind the top performers when it came to grip, which in the dry was similar to that achieved by the Giti tyre and in the wet it was sometimes a tick better than the Sport S1 and sometimes slightly poorer. In addition, Efficient Grip Performance tyres fitted to the rear axle displayed “nervousness during change of load.”

Finishing in fifth place was the Hankook tyre. “Grippy and quiet on dry surfaces. But when it rains the Ventus Prime³ K125 doesn’t adhere optimally,” wrote Autozeitung. In short, while the tyre achieved the second-highest overall summer tyre score in the dry, it gained the lowest wet score. The testers reported that the Hankook rubber was “less balanced than Giti and Goodyear” and also “lightly nervous on the brakes” on wet road surfaces. In dry conditions its grip lay in between the Falken and Giti tyres, however external noise levels were low.

The ranking of the Sport S1 in last place amongst the summer tyres has a lot to do with a need for improvement in the area of grip. The Giti tyre’s braking distance in the wet is described as “still acceptable”, however it was the longest of all summer candidates in the dry. In addition, steering was delayed on wet surfaces, speed capability in curves was low, traction below the best tested and the tyre displayed a tendency towards early understeer in the dry. On the other side of the coin, the Sport S1 emitted very little tyre/road noise.