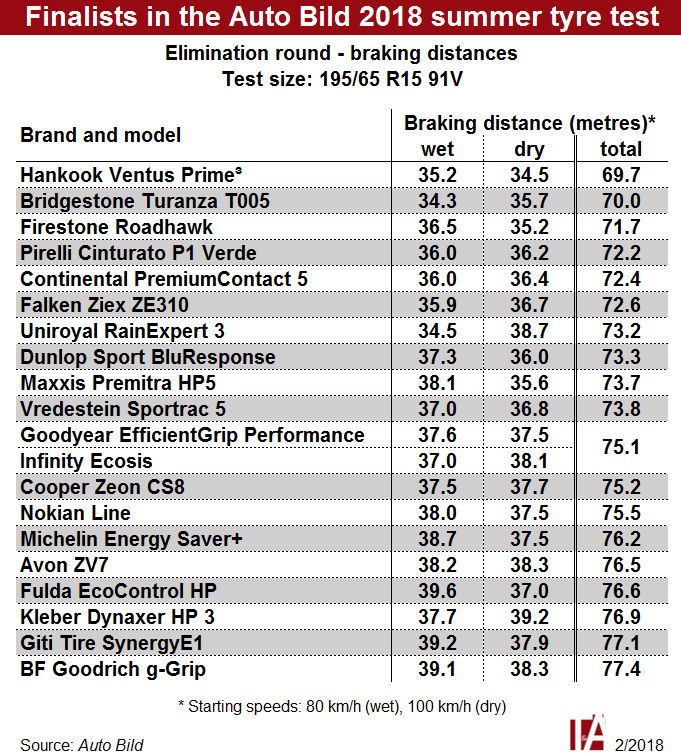 It may be early in the year, but thanks to Auto Bild the first summer tyre test results from Europe are already with us. The German car magazine has stuck with its jumbo-sized format and evaluated a wide field of contenders for its 2018 summer test, with lower-performing tyres eliminated in a qualification round. Results from this initial round have now been released.

A total of 51 candidates were subject to wet and dry braking tests. Stopping distances from 80km/h in the wet and 100km/h in dry conditions were measured to determine which of the size 195/65 R15 91V summer tyres would proceed to the second, in-depth phase of evaluation. Only the 20 best performers made the grade.

This elite group begins with the Hankook Ventus Prime³ and is followed by the Bridgestone Turanza T005 and Firestone Roadhawk. Other top-20 finalists include the Pirelli Cinturato P1 Verde, Conti PremiumContact 5, Falken Ziex ZE310, Uniroyal RainExpert 3, Dunlop Sport BluResponse, the Premitra HP5 from Maxxis, Vredestein Sportrac 5, Goodyear EfficientGrip Performance, the Ecosis from Infinity, Cooper Zeon CS8, Nokian Line (originally xLine), Michelin Energy Saver+, Avon ZV7, Fulda EcoControl HP, Kleber Dynaxer HP 3, Giti SynergyE1 and the BFGoodrich g-Grip. We’ll have to wait a few weeks to discover how well these tyres performed during the second round of testing – in past years, Auto Bild has published its full test report around a month after the preliminary results.