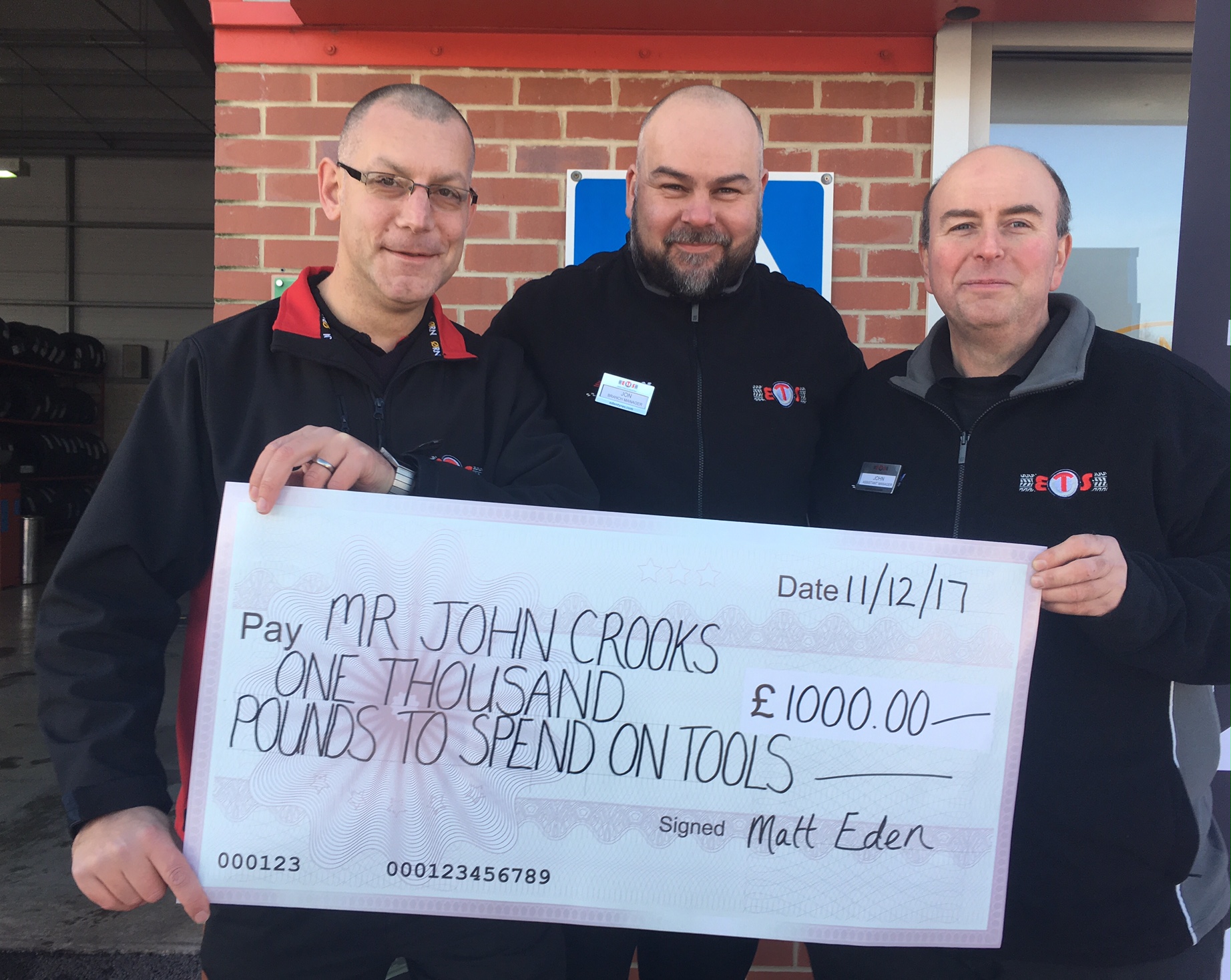 John Crooks from Brinsley, Nottinghamshire won an Argos gift card to the value of £500 and £1,000 to spend on tools

Eden Tyres & Servicing (ETS) recently named the company’s shortlist for their 2017 Technician Of The Year awards, sponsored by Firestone.

Fast fitters from ETS’s 14 Midlands sales depots were nominated for the prestigious award and the hopeful contestants were whittled down to a shortlist of 10. Finally, one overall winner was crowned the official Technician Of The Year.

John Crooks from Brinsley, Nottinghamshire, who works at the ETS branch in Sutton-in-Ashfield, was deemed to be the very best of the very best, and in so doing, bagged himself an Argos gift card to the value of £500 and £1,000 to spend on new tools. The win represented genuine recognition for John, 47, who will be celebrating 30 years as a tyre technician next year and moving into a new managerial role.

The other nine finalists were not left empty-handed either, as they all took home £500 Argos gift cards too.

John spoke of his delight and surprise at the win. He said: “I come to work with the attitude that I’m going to do my work as best I can. When I’m here I’m going to give 100 per cent.

“They did the presentation to all of the finalists who had won the £500 vouchers, and so showed up at my work to present to me. They put the banner up, and then the operations manager came out and handed me a bottle of Champagne, and John Tagg, the manager, was waiting there with the cheque. It was a real shock!”

The Firestone-backed competition, in its second year, was designed to recognise the sterling work of the ETS technicians at their fourteen locations throughout the country.

A spokesman for ETS said: “We set this competition up to reward our most loyal and hardworking staff at the end of each year. We wanted to acknowledge and encourage our staff to work hard and ‘shine’ throughout the year.

“Our technicians are extremely important to the business – in fact they are the ‘lifeblood’ of the business, we wouldn’t be able to operate without them. We look for a fitter that has excelled in all of the above and has gone above and beyond to do a great job and represent our company well.”

Firestone’s sales development manager Sam Allatt said: “We were thrilled to sponsor ETS’s Technician of the Year awards and celebrate so many ‘unsung heroes’ at the business. ETS are a valued customer of ours and we know that their staff are a tremendously hard working bunch.

“It was great to see so many of them being acknowledged for their hard work and we hope that our prizes went some way in making for a merry Christmas for them. We look forward to working with ETS again on similar initiatives in the future.”