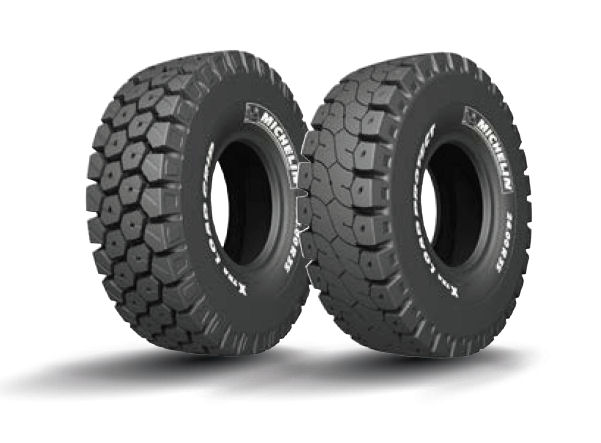 Michelin has launched what it says are the first ever ‘3 star’ 24.00R35 tyres on the market – its new ‘X TRA Load’ range for 40 to 80-tonne payload rigid dump trucks. The manufacturer says the tyres offer an increased load capacity, greater tyre life and a significant increase in productivity through improved tonnes per mile.

According to Michelin, the Tire and Rim Association 3-star rating is the result of an optimised design that improves stress distribution within the tyre. In practical terms, this is said to equate to an eight per cent higher payload or an increase of nine tons in load capacity per machine.

The range contains two tyre lines, with both available in A4 and B tread compounds. Designed for applications where soft, loose, muddy ground conditions are present, such as mining and quarrying operations on slopes and inclines, the X TRA Load Grip replaces the 2-star rated XDTA4 and XDTB, as well as the X-Traction SC. The tyre for hard, sharp abrasive conditions on flat, dry surfaces, such as quarries and construction sites, where the priority is protection and damage resistance, is the X TRA Load Protect. This replaces the X-Quarry S (A4 compound) and X-Haul (B compound).

According to Michelin, the X TRA Load has eight per cent higher wear resistance than the X Quarry S thanks to an increased volume of rubber in the new tread design and better load distribution across the contact patch. The volume of rubber in the new range is at least nine per cent more than in the X Quarry S and almost 30 per cent more than in some leading competitors’ tyres of the same size. Additionally, this greater volume of tread rubber in contact with the ground gives better load distribution, improved wear resistance and an increase in tyre life.

The manufacturer also claims a boost in tyre endurance through the use of new tread patterns, noting that the Michelin X TRA Load Protect has interlocking blocks and improved heat dissipation that reduce the temperature in the tread area by up to 12ºC. The X TRA Load Grip has 17 per cent more rubber in the tread pattern than the previous generation XDT, while the X TRA Load Protect has nine per cent more tread rubber than the previous X Quarry S.

Both ranges are being homologated with OEMs this year ahead of an original equipment launch in December 2017.