You are here: Home1 / News2 / Product News3 / Continental teaching cars how to park

Continental teaching cars how to park 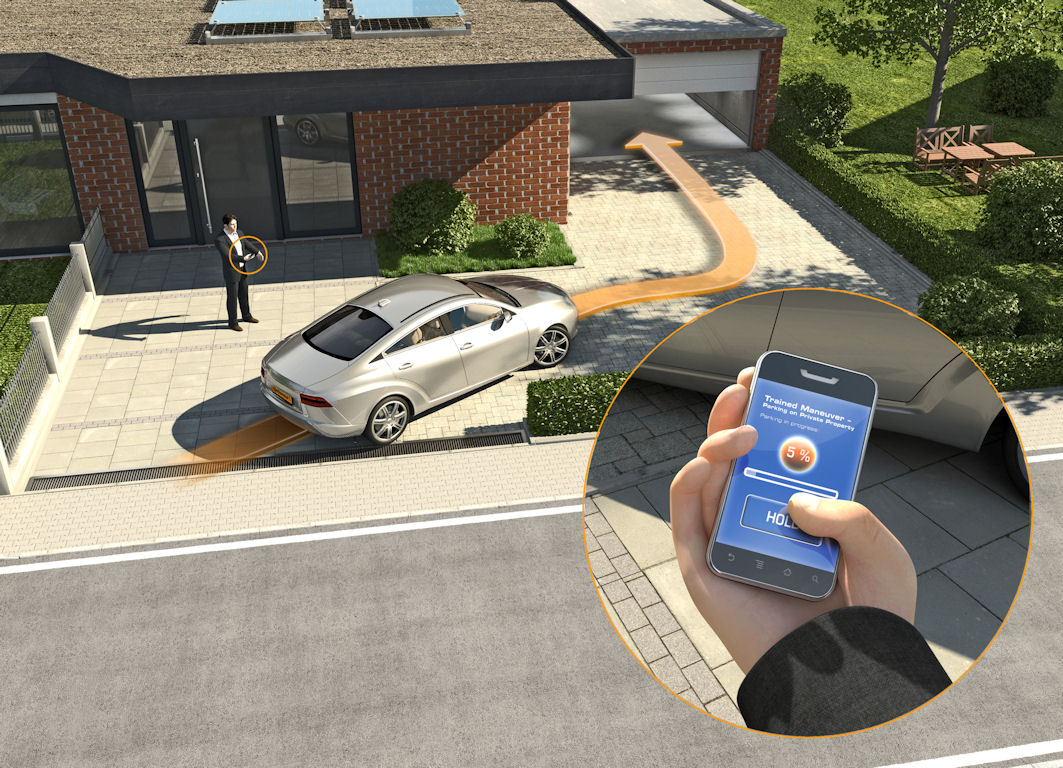 Parking by phone: With just the push of a button, Trained Parking will bring a car to its designated space

Parking is arguably the most tedious aspect of the whole driving experience, and therefore a new development from Continental should be welcomed with open arms. The technology company has come up with a solution that relieves drivers from recurring parking routines. One a driver has parked in their regular space, and done a good job of it, their car can repeat the manoeuvre time and time again with no human assistance.

The new Trained Parking function gives cars a memory of sorts by recording and storing the sequence of a parking procedure. When the procedure is to be repeated, the driver only needs to position the vehicle somewhere near where the recording began and, at the touch of a button, the vehicle independently performs the previously learned parking manoeuvre.

“Parking procedures, such as from the house door into the garage, show how effective automation already is in vehicles today,” comments Alfred Eckert, head of Advanced Technology in Continental’s Chassis & Safety division. “When it comes to repeating processes, automation is already unbeatable in terms of reliability. Furthermore, the technology is getting ever better at detecting and handling changing situations.”

Continental explains that the Trained Parking function uses sensors already fitted as standard to a vehicle, such as cameras, radar and sensor technologies such as LiDAR to gain a picture of its surroundings. When learning a manoeuvre, the system generates a precise map of the surroundings from the sensor data and then stores this map. When the vehicle later returns to the area covered by this map, it can determine its precise position and automatically drive the learned route. The driver can exit the vehicle before activating the parking procedure as the vehicle parks entire without driver assistance. In doing so, Trained Parking not only relieves the driver from a tedious routine, but it also allows vehicles to park in tight spaces in garages without the driver having to squeeze out of a tight door opening.

“Next time the driver wants to park their car at the same place, the vehicle verifies its position using this learned map and repeats the learned parking procedure,” says Benedikt Lattke, project leader for driver assistance systems and automation in the Advanced Technology department of the Chassis & Safety division. Depending on how much memory is available, a Trained Parking system can store several parking routines, each up to several hundred metres in length. The parking procedure can also be reversed for the car to drive out of the parking space.

Vehicles using Trained Parking technology observe all 360 degrees of their surroundings during every parking procedure. If a stationary obstacle is detected, such as a rubbish bin, the vehicle will drive around this automatically if possible. In the case of moving objects, such as playing children, the vehicle will stop and only continue parking once its surroundings are free from obstacles.

Two versions of Trained Parking will be available. The variant that will be presented as part of New Mobility World exhibition at the IAA motor show this September is a partially automated solution that still requires supervision by the driver. It works according to the ‘dead-man’s switch’ principle, meaning that the function is only active as long as the driver continues to press a button on a key or mobile phone. This version is expected to be in series production in 2020. The next stage in development will bring full automation and won’t require any driver supervision. Lattke comments that this second variant requires both the use of a camera and a second type of sensor as cameras on their own can be particularly sensitive to environmental influences.