Motorrad: No major weaknesses in test of six touring tyres 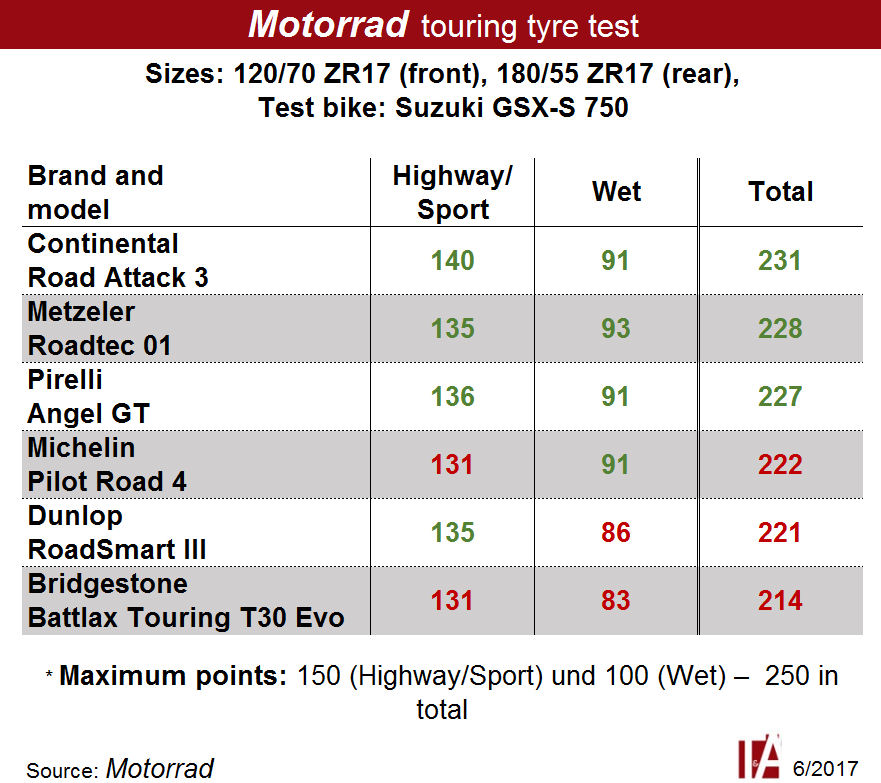 We’re used to seeing Continental products winning or securing a podium place in car tyre tests, and in the 12/2017 issue of Motorrad magazine, the tyre maker has also cleaned up in a test of motorcycle tyres. The German publication declared the Road Attack 3 the victor in its comparative evaluation of six size 120/70 ZR17 (front) and 180/55 ZR17 (rear) touring tyres.

The Continental tyre locked horns with the Bridgestone Battlax Touring T30 Evo, Dunlop RoadSmart III, Metzeler Roadtec 01, Michelin Pilot Road 4 and Pirelli Angel GT in a series of open road, sport and wet weather challenges. All tyres were tested fitted to Suzuki GSX-S 750 bikes. With a total score of 231 points out of a possible 250, the Road Attack 3 was the overall winner, however just 17 points separated it and the lowest-scoring tyre. None of the candidates showed any significant weakness in the wet or dry. Motorrad wrote that “measurable differences could actually only be detected during extreme testing on closed circuits,” adding that “in everyday (riding) all tyres perform almost just as good” as each other.

Victory, rather, came courtesy of fine nuances. While the previous-generation Continental tyre, the Road Attack 2 Evo, fared very well in the dry categories of prior tests, room for improvement in the wet remained. This discipline appears to have been a development focus for the new product, and although it finished the wet testing behind the Metzeler Roadtec 01, the Road Attack 3 nevertheless achieved a respectable second place.

“Comfort, fast response behavior, full-bodied feedback – the Roadtec 01 really is the perfect companion” for all conditions experienced in a typical motorcycling season between Easter and October, commented the Motorrad test team regarding the Metzeler tyre, which finished in second place overall with 228 points.

Close behind with 227 was the Angel GT from sister brand Pirelli. “Runner-up on the highway and runner-up in the. This speaks in favour of a wonderful, broadly-balanced tyre, even though the points difference didn’t suffice for overall runner-up,” shared Motorrad.

The fourth-placed Michelin Pilot 4 was viewed as a good all-rounder, and with 222 points it finished the test one point ahead of the Dunlop RoadSmart III. The latter tyre demonstrated marked improvement over its predecessor in terms of manageability and steering response, however it was held back by “minor quality problems” such as vibration and an “imperfect run-out” on the rear tyre.

The sixth out of six tyres was the Bridgestone T30 Evo, and while this was in principle considered a balanced and neutral tyre, it was marked down in both the dry and wet disciplines. Nevertheless, Motorrad stressed that it is “not a bad rain tyre” and impressed by demonstrating easy to identify limits in the wet. Unfortunately for the Bridgestone tyre, the overall performance its rivals put in was slightly better. “Anyone who doesn’t attach great importance to agility and top wet performance will still be well served by the T30 Evo,” commented the publication.