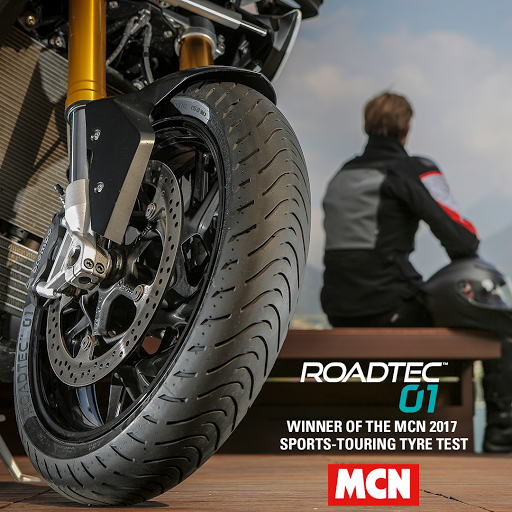 Metzeler reports with pride that its Roadtec 01 has been voted the Best Sports Touring Tyre by Motorcycle News for the second consecutive year. The publication evaluated eight sports touring tyres at Bruntingthorpe Proving Ground, and published the results of this test in its 7 June 2017 issue.

MCN described the Metzeler tyre’s comfort as “outstanding,” adding that the tyres made the Yamaha MT-09 Tracer used for the test feel “as though it’s just had £3000 worth of suspension upgrades.” MCN wrote: “The front tyre transmits a great feeling under all conditions and above all offers a very high sporting potential which allows you to go deeper into corners than you would expect a sports-touring tyre to let you go.” As for the rear tyre, the testers admired the excellent grip level, writing that “you just don’t give grip a second thought, because it’s there in abundance. Very confidence inspiring.”

Concluding its test experiences, MCN emphasised that the Metzeler Roadtec 01 managed to grab the ‘Best Sports Touring Tyre’ title “thanks to their all-round ability to dramatically transform a bike’s handling performance and ride quality.”