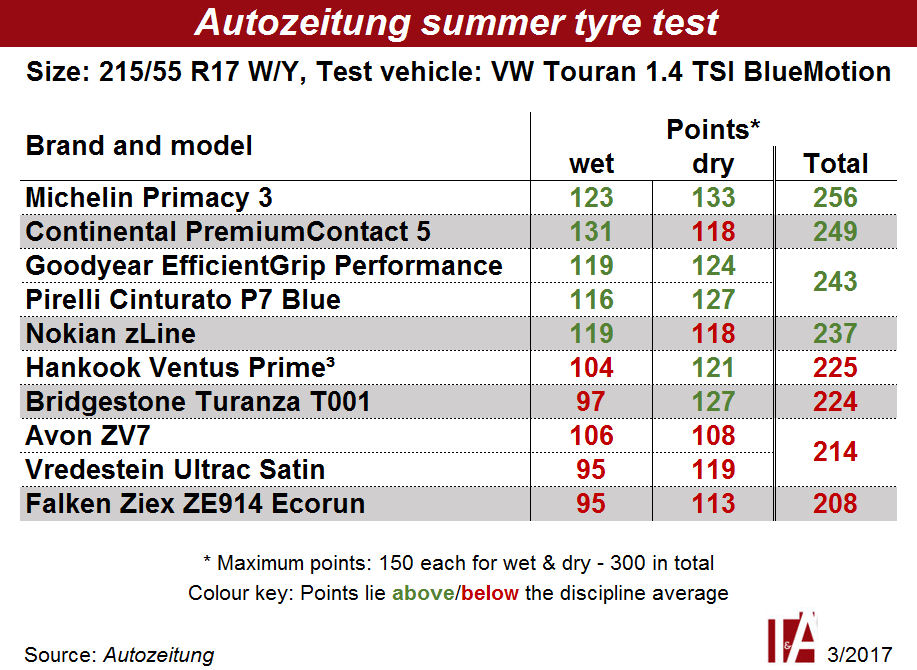 It’s summer tyre test season, or at least the time of year when the results are published. German car magazine Autozeitung has evaluated ten size 215/55 R17 W/Y products. Its decision to only test tyres available for retail purchase at the time means that two newcomers, the Bridgestone Turanza T001 Evo and the Continental PremiumContact 6, aren’t included amongst the ten. Instead, the two brands were represented by each tyre’s respective predecessor.

In the interests of transparency, the Autozeitung testers report that the Hankook test tyres were, according to the manufacturer, a “very early batch” of products made according to original equipment requirements. The Autozeitung testers claimed they discerned no difference when testing the tyre, however Hankook Tire promises it is “utilising a compound for the replacement market that generates greater wet grip.” This compound changeover for the Ventus Prime³ began with DOT 4016 production, and tyres for the European market produced in Hankook’s factory in Hungary have been made with the new compound since DOT 3416. The question of whether the compound played a role in the Hankook tyres’ test performance – the Ventus Prime³ finished in sixth place – isn’t answered.

Third place is shared by two tyres, the Goodyear EfficientGrip Performance and Pirelli P7 Blue; the pair each received 243 points. The Goodyear tyre achieved the shortest wet braking distance and was also commended for its low rolling resistance. On the other side of the balance sheet, it was deemed to deliver “relatively sluggish handling” that prevented the tyre from being higher ranked. The Pirelli tyre’s main shortcoming was its aquaplaning behaviour in curves, however the testers were impressed by its “sporty-agile handling” and “high energy efficiency.”

Leapfrogging over the unoccupied fourth place, we find the Nokian zLine in fifth with 237 points and the Hankook Ventus Prime³ in sixth with a score of 225. The Nokian tyre was said to “wrangle with aquaplaning and the highest rolling resistance,” but aside from these negatives was “great.” The Hankook rubber gave a robust performance, yet gave way to its higher-ranked rivals on both wet and dry roads. Both tyres were, in addition to the top four, rated ‘highly recommended’ by Autozeitung.

Next came the tyres from Bridgestone, with 224 points, Avon and Vredestein, which each received 214, and Falken, which scored 208 points. Wet performance proved a drawback for the Turanza T001, although it was described as “strong” in the dry. Insufficient grip and high rolling resistance were the main criticisms levelled against the ZV7, and given that the Avon tyre is a relatively new product, the Autozeitung testers considered its final score “disappointing.” The Ultrac Satin, which finished on the same level, presented itself as a very efficient tyre, but was let down by a long braking distance in the dry and “weak wet performance.” Tenth and last place was occupied by the Ziex ZE914 Ecorun. According to Autozeitung, the Falken tyre performed well in the aquaplaning test, however it was marked down for its long braking distances.