You are here: Home1 / News2 / Career Tracks3 / Foxy Lady Drivers Club Woman of the Year shares her life in tyres 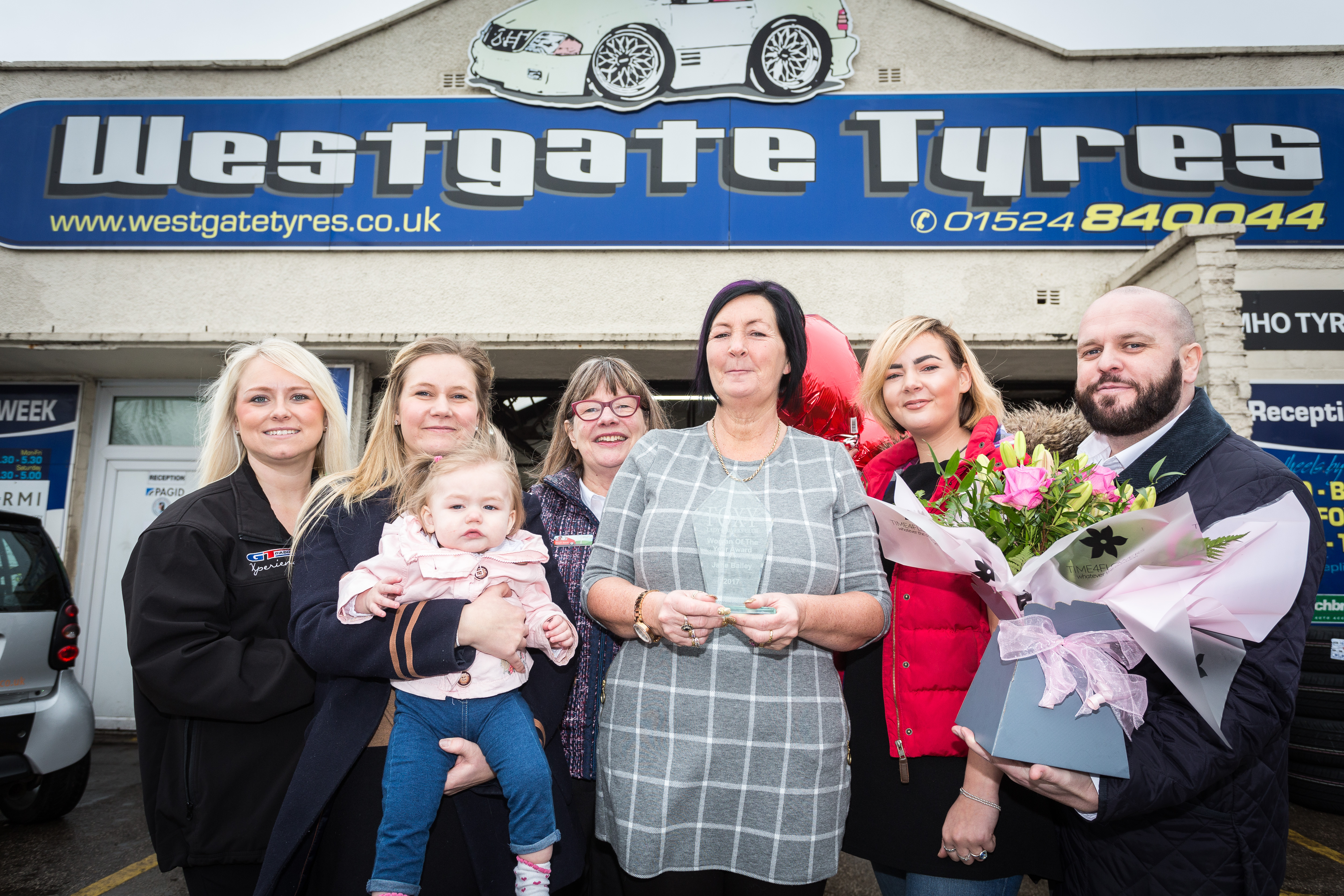 The business success of Westgate Tyres, achieved concurrently with raising a family and latterly while battling ill health, made Jane Bailey Foxy Lady Drivers Club’s Woman of the Year 2017. Her story, told in the Q&A below, illustrates her determination to make Westgate a success, as well as the way in which a love of cars brought her back to the tyre business, and shows the generations of her family working to make the dealer a more appealing destination for female tyre buyers.

Q: Please tell us about your early life.

“In the 1970’s women were even less likely to be mechanics or tyre fitters than they are today. There was little or no training available for us. So when I left school at 16 I went to work for British Gas for 11 years but my love of cars remained. In the meantime I had met my future husband Graham who was a fitter with a national tyre company and we got married when I was just 18.

“Our first daughter Emma was followed by three miscarriages but after a troubled pregnancy we were thrilled when our second daughter Sophie was born eight years later. Losing three babies made us think seriously about our family future and the dreams we had to run our own business.”

Q: How did Westgate Tyres come about?

“When the right premises came up in 1997 we jumped at the chance to open our own tyre business which we called Westgate Tyres. This was a scary thing to do because Emma was just 10 and Sophie a mere 20 months. We risked everything to set up the garage but neither of us wanted to look back in later life and regret not having been brave enough to give it a go.

“At the beginning I did the book-keeping, planned the tyre promotions and ran the reception area. Sophie spent her early days in a playpen in the waiting room – it was a case of pulling together to keep a roof over our heads.

“After working all day at the garage, Graham would look after the girls at night whilst I’d do a stint at the local Asda on the tills until midnight. These were long, hard and tiring days for us both with little outside support but we always knew our hard work would pay off in the end.

“As the business grew, so did the administration and promotions so I took the brave step of leaving Asda when Westgate Tyres became our only source of income. These were precarious financial times when holidays went on hold and we worked 363 days a year bar Christmas and New Year Days. My role as wife, mother and business partner became harder and harder but our efforts were at last starting to pay off, allowing us to employ staff and add new customer services.”

Q: When did the rest of the family get involved?

“Our daughter Emma (now 29) had started working for us as a Saturday receptionist at the age of 14. She shares our love of cars, of course, owning a Barbie Pink Puma at the age of 17! She now works full time in the business and has two daughters herself, aged 5 years and 6 months. Unsurprisingly our eldest grand-daughter also loves cars, is often seen in overalls and the pair of them starred in our award-winning Tyre Safety advertising campaign. Emma’s husband has his own accident repair centre so it’s cars, cars, cars for the whole family.

“Our younger daughter, Sophie, is 20, equally as car mad and runs a pimped up Suzuki Swift Sport. She is helping us take the business forward with a fresh eye. The business is now a GT Radial Performance Centre and we’re happy to be fitting trust with every tyre alongside such a fantastic money back guarantee. Sophie visited the Ascari race track in Spain earlier this year and test drove a selection of vehicles fitted with GT Radial tyres – they all performed really impressively in both wet and dry conditions.

“Sophie’s partner has his own car detailing company so our family businesses all complement each other.”

Q: How did you promote your business as different from others?

“I am a strong believer in targeted advertising and have spent years working hard to build awareness of our business. The tyre industry is very male dominated and doesn’t always have the best of images so my daughters and I work tirelessly to make our business as genuinely female friendly as possible.

“So much so that we decided to join the Foxy Lady Approved Tyre Register and work with their motoring club for women to promote our regular Ladies Nights. Our aim is to empower local women with the knowledge and confidence to do their own car maintenance and tyre safety checks.

“As a result, Westgate Tyres sees a high percentage of female customers and I honestly believe they visit us because they know women work here. They tell us they’re reassured that they’re understood and always treated with the utmost respect and honesty.”

Q: When did your personal health become a problem?

“After a couple of years of feeling so ill and so tired that I could put my head on my desk and instantly fall asleep, I was diagnosed with colon cancer in 2013. This is when my world fell apart – I was critically ill and admitted to hospital a week later for major surgery.

“My family now had the business to run by themselves whilst worrying about a seriously ill mum and wife. I don’t know how they all held it together but they did – putting on their brave faces, shedding tears in private and going through the motions of keeping the business running as normally as possible in the circumstances.

“The Cancercare charity has been a true lifeline for me. It has provided emotional support which you need, especially when you’re self-employed. When you’re recovering from major surgery of any kind you need rest, an absence of stress and time for your body to heal. Colon cancer adds additional challenges – you need to get used to a completely new diet and just getting through every day has been a real battle for me.

“Trying to recover and keep the business running was extremely difficult but cancer hadn’t beaten me. Within a couple of weeks, I was doing the book-keeping from my bed and visiting the business in a wheelchair. After three years, I’m delighted to report that Mrs B (as the staff all call me) is fighting strong.

“During all this I’ve been amazed by how many friends and customers came to talk to me about health concerns before being diagnosed with this cancer themselves. So I now try to raise early awareness of colon cancer whenever I can, including organising a fund-raising event every year.

“The fear of having to give up everything we had worked so hard for has certainly pushed me on and, had I worked for someone else, I might have lost my job or not had the unshakeable resolve to keep going, regardless.”

“After all this, my love of cars is stronger than ever. I particularly love classic cars because they are so stylish, they look very different and they are often a driving challenge. I try to visit as many classic car rallies as I can with either a Morris 1000 or Sunbeam Alpine. My everyday car is a sporty open-top 150 Mini whilst Graham enjoys his Subaru, Porsche and Nissan Navara!

“I’m also very proud of our daughters as ambassadors of our business and now it’s their turn to take things forward and allow me time to focus on myself, for a change.

“I am delighted to see such a bright future ahead of them as they make their female mark on today’s tyre industry.

“I often wonder if my Dad could see how those early days spent encouraging me to help him under a car bonnet would shape the rest of my life! And then that of my daughters and grandchildren, given time!”