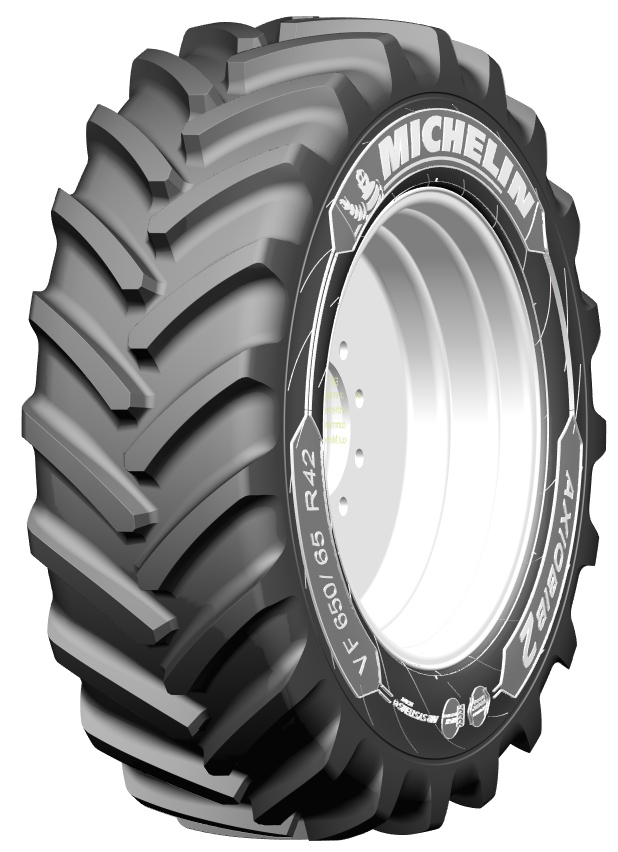 The LAMMA show got under way today at the East of England Showground in Peterborough, and Michelin is using the occasion to host an exclusive UK preview of its all-new AxioBib 2 tyre range, allowing farmers and contractors to view the new agricultural tyre ahead of the planned international launch in June 2017. The new Kleber Cropker is also on display – both tyres can be viewed on stand G33.

From June, the AxioBib 2 will be available in two very high flexion dimensions for 160hp to 320hp tractors, VF650/65 R42 and VF540/65 R30, with further sizes joining the range later in the year. Michelin states that the new products bridge the gap between the XeoBib, which is suited to 120hp to 220hp tractors, and the AxioBib, which is intended for fitment on 300+hp equipment. With the AxioBix 2, Michelin aims to meet rising demand for tyres that can carry high loads at lower pressures.

“AxioBib 2 stands out for its exceptional load capacity from its VF construction and 650mm section width, which we expect will make it a firm favourite for ploughing,” comments Gordon Brookes, customer engineering support manager at Michelin. “Farmers also tell us they prefer a 42-inch rim over 38-inch variants, meaning this tyre should hit the sweet-spot for many.”

The tyres also carry Narrow Rim Option (NRO) markings on the sidewall, indicating their ability to carry a higher load capacity without the requirement to upgrade to wider wheel rims. Each VF 650/65 R42 AxioBib 2 tyre is capable of carrying an extra 2,450 kilogrammes at 40 mph or 65 km/h than the same size of MultiBib, making it particularly desirable given the increasing weight of new farm machinery, and can operate at speeds up to 70 km/h or 43.5 mph.

LAMMA is also the launch venue for another Michelin Group product, the new Kleber Cropker tyre range for agricultural sprayers and trailed equipment. The tyres will be initially available in eight sizes for 80 to 200hp machines, including 230/95 R32 and 270/95 R54. The refreshed Kleber Cropker range offers an increased load capacity, a ten per cent cent load bonus at 40kph and an increased speed index of 40 mph/65 km/h.

“The tyres offer an excellent performance rating, helping farmers and contractors increase efficiency while minimising impact on crops,” states the manufacturer. “All Kleber tyres are built with robust casings and are designed for a long service life, even under heavy loads. The tyres’ shoulders are shaped to ensure good crop protection, helping to increase yields – a major plus for farmers facing the challenge of producing more for an ever-increasing population.”