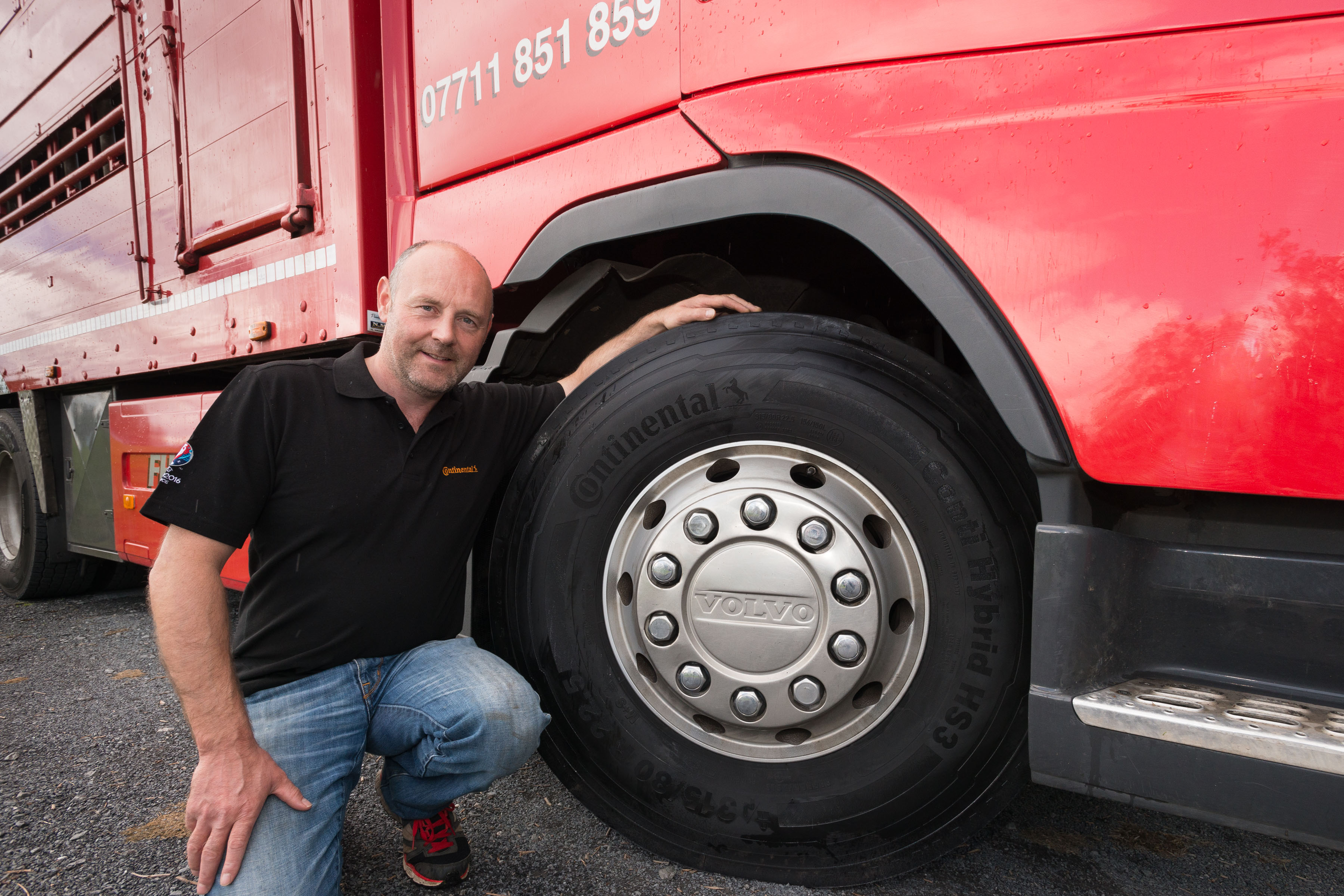 Specialist livestock haulier, Frank Hanna, has fitted ContiPressureCheck (CPC) systems onto his dedicated Volvo artic and drawbar trucks. While his livestock rigs, which operate from 3:00am transporting large loads of pigs, sheep and cattle, cover a comparatively low mileage, the nature of the work means navigating rough country lanes and tight farmyards. Therefore, Frank Hanna needed a TPMS to spot tyre problems before blowouts occur. The ContiPressureCheck system uses tyre sensors mounted inside a rubber housing on the tyre inner liner that can continuously measure both pressures and temperatures.

As Frank Hanna says, “My father, Richard, started this business in 1985, and he drummed into me that tyre condition is absolutely critical to our ability to get animals to their destination in good condition. Just one puncture saved can make a huge difference. If a load of pigs gets stuck on the road, or even left too long in a holding pen because of a collection delay, especially in hot weather conditions, you have a real problem. They can fight, or even simply die of stress, the cost to the business is often far more than the cost of the CPCs.”

In the livestock business around Frank Hanna’s base at Maghery, County Armagh, in Northern Ireland, the running conditions can be rugged. “We don’t do huge distances, maybe 75,000kms a year per truck, but we’re along tough country lanes and in and out of tight farmyards, which can play havoc with tyres. Some yards are so small we have no choice other than to spin round as tight as we can, regardless of tyre scrub and the almost inevitable presence of nails, screws and other bits of sharp metal that farmyards seem to attract. So we need to know as soon as possible if we are losing pressure on a tyre.”

There are two motivators at work. The first is the obvious cost factor that a blow-out from an under-inflated tyre can cause. Frank is clear on the subject, saying, “I am absolutely certain soft tyres account for the majority of blow-outs. When a soft tyre blows because it hasn’t been spotted early, you can be pretty sure it will take out the mud guard and eventually the tyre next to it as well.”

The second is safety. “A triple deck trailer of live pigs is difficult enough to manoeuvre, but a blow-out can cause it to sway violently and become a real handful, with the potential for causing danger to other road users and the livestock itself. Over-inflation can be just as bad, because, again, it doesn’t help driver control and you get increased and unnecessary wear down the middle of the tread.”

Hanna Livestock trucks use Continental’s in-cab monitor to give continuous, accurate information on each tyre. Frank Hanna has opted out of having reports fed to the office computers, because, as he puts it, “Tyre maintenance is absolutely critical to safe operation, so it’s up to all of us actually driving these livestock units to know what our tyres are doing. Just last week we had an instance where a driver noticed a dropping pressure in one tyre, but, because he could monitor it in real-time, he was able to make a judgement call that it would be safe to complete the delivery and then deal with it. It’s mind-blowing just how accurate this system is.”

With customers demanding deliveries at 5:30 every morning penalties for non-compliance can be tough. It isn’t just Hanna Livestock that is penalised; their farmers too are relying on them to get their animals delivered without delay. As Frank Hanna puts it, “Ferry captains don’t care about a tyre problem. They have a timetable, and if you don’t meet it you don’t get on board. It’s a simple and as demanding as that!”

So demanding is the work in fact, Frank has developed a routine that sees him, every Sunday night, going to the yard, powering up the livestock rigs and checking the CPC for all tyre pressures. “You can’t rule out the unexpected,” he says, “but you can make sure you have done everything possible to ensure you are ready to start running at 03:00 on properly inflated tyres. And it is certainly an improvement over my old routine of going round every tyre on a Saturday morning, down on my knees, unscrewing all the dust caps and using a hand held gauge to check pressures. Apart from anything else, if a valve is unsettled or a dust cap not correctly replaced, you can end up leaving more trouble behind you.”

With regular demands of tough roads and tight farm-yards, Hanna Livestock clearly sees Continentals Tyres as being up for the job. The Conti Hybrid HS3, HD3 and HT3 tyres that grace their steer, drive and trailer axles are working well, but as Frank is quick to point out, “It’s the pressures and their consistency that deliver best tyre wear. When I first read about ContiPressureCheck I thought to myself, ‘That’s a brilliant idea’. I didn’t need convincing. Even before I enquired at GC Tyres, my local dealer, I knew that if it did what it claimed, this would single-handedly transform a vital part of our operations. And that is exactly what it has done.”