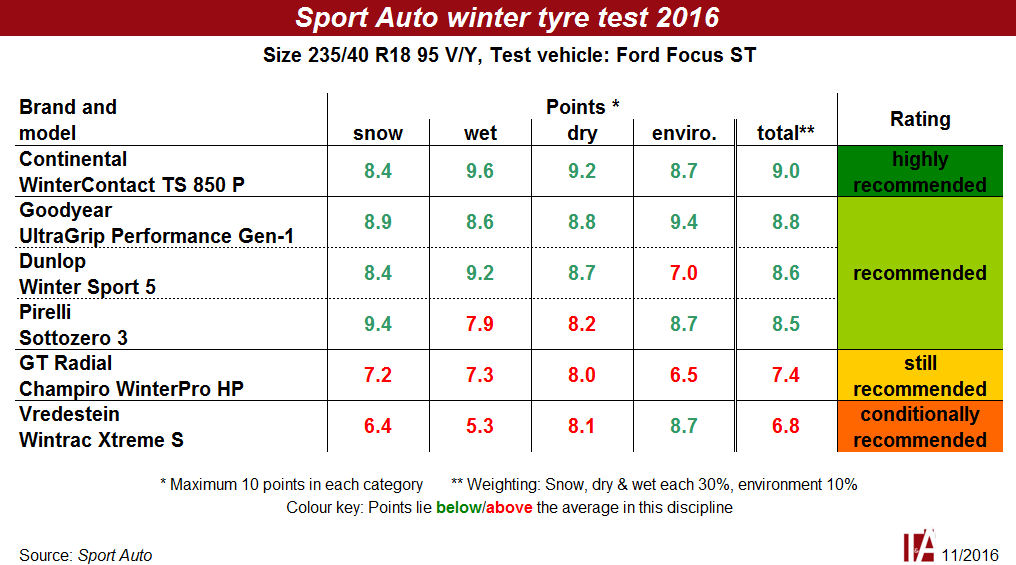 The words ‘WinterContact’ and ‘tyre test winner’ seem more or less interchangeable at the moment. Following victories at Auto Express, auto motor und sport and Auto Bild, the Continental winter tyre – this time the WinterContact TS 850 P – now makes an appearance at the top of the Sport Auto test table for a second consecutive year. The German magazine’s test of six tyres also featured one much cheaper product from Indonesia, and this tyre showed that the lowest price doesn’t necessarily equal the lowest performance.

In its size 235/40 R18 95V/Y tyre test, Sport Auto considered the Continental tyre “safe on snow,” “outstanding in the wet” and offering “agile and direct steering characteristics in the dry.” Despite imperfections when it came to aquaplaning and ride comfort, Sport Auto awarded the WinterContact TS 850 P a rating of ‘highly recommended’.

Runner-up was Goodyear’s UltraGrip Performance Gen-1, which was rated ‘recommended’ along with its sibling the Dunlop SP Winter Sport 5 and the Pirelli Sottozero 3. The Sport Auto testers wrote that the Goodyear tyre has a “very safe and reliable driving behaviour with large (safety) reserves on snow and dry surfaces,” and showed the “best aquaplaning prevention” and “very low rolling resistance.” The SP Winter Sport 5 had the shortest braking distance and “balanced, sporty handling on snow,” and was considered “safe and easy to control in the wet.” The Pirelli tyre gave the “best snow performance in the test” as well as “decent wet and dry characteristics.”

The test’s main surprise arguably came in the battle for fifth place. Tyre tests carried out by major European publications typically feature at least one tyre from the Far East, and more often than not it is used as a yardstick for measuring the distance between the established tyre brands’ performance and that of their newer rivals. In the Sport Auto test, however, the one Far East entrant failed to conform to this expectation and avoided the undesired wooden spoon of sixth place.

The GT Radial Champiro WinterPro HP – which, at a listed price of €125.50, is €52.50 cheaper than the second lowest-priced tyre in the test (and €76 cheaper than the most expensive) – finished in fifth place with a rating of ‘still recommended’. Although the GT Radial tyre was marked down for directional control on snow and rolling resistance, and it had the longest braking distance from 50km/h on a snow-covered road, the Champiro WinterPro HP was considered to have “decent traction and braking power on snow” and “balanced dynamics on wet and dry surfaces.” Sport Auto also noted that the tyre generates very little noise.

Last place in the Sport Auto test was reserved for the Vredestein Wintrac Xtreme S. The Vredestein tyre finished last in seven of the nine wet and snow performance tests performed by Sport Auto’s testers and was judged to demonstrate a “significant disparity between directional control and traction on snow.” Other criticisms from Sport Auto were “excessive braking distance, light oversteer and directional control ‘kink’ at large steering angles on wet road surfaces” and “weakness during aquaplaning.” The testers noted that these deficits were compensated for by “safe braking and good traction in the snow,” and they also found the Wintrac Xtreme S to be “sporty-direct in the dry.” Nevertheless, when its overall performance scores were totted up, the Vredestein tyre only qualified for a rating of ‘conditionally recommended’.