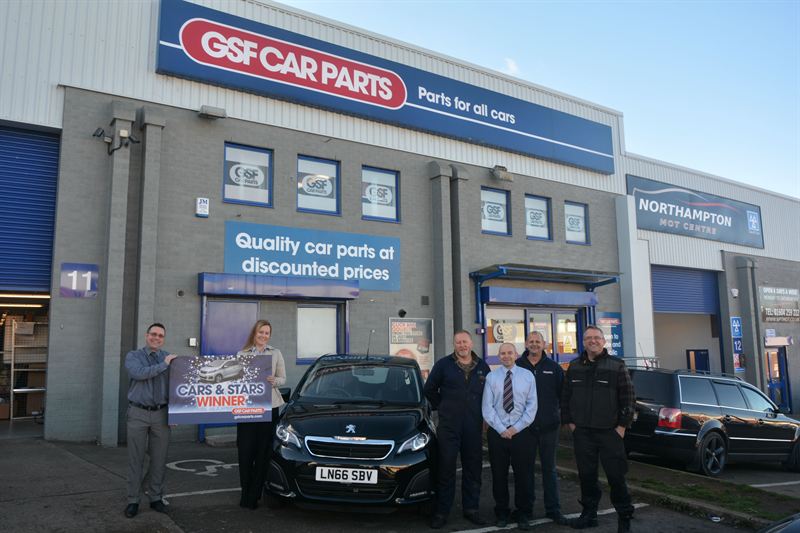 Delighted garage owner Chris Kellett arrived at the Northampton branch on the windy morning of Wednesday 19th October to pick up his shiny prize.

‘Cars and Stars’ – GSF’s biggest ever trade promotion – started in September and offers Love2Shop vouchers worth £100, £250 or £500 based on hitting individual 1, 2 or 3 star spend targets, across each of the three months until the end of November.

Chris said: “We found out we’d won about 10 days ago. To hear you’ve reached the monthly target and won £500 is great.

“I was absolutely over the moon when I heard I’d won the car too. I was astounded.”

The car was given away as part of a monthly prize draw which sees all customers achieving any target eligible.

The main draw prize each month is a brand new Peugeot 108 – ideal as a courtesy car or family runabout – whilst five lucky winners will also be invited skiing by GSF Car Parts in France’s luxurious Val D’Isere resort in March 2017.

It’s a really good relationship. Their expertise on the phones is fantastic and they’re great on deliveries as well as just being really nice people to work with.

“Dealing with people that know what they’re talking about means you get the right parts first time, where we need help on parts identification or technical backup they’re excellent.”

Amanda O’Reilly, Head of Marketing at GSF Car Parts said: “So many garages registered and hit September targets that we’d already given away over £100,000 in vouchers.

“It’s exciting to see where we’ll end up as there are still two more months to go. We were delighted to see such a loyal customer’s name drawn out of the hat for the car too.”

Garages interested in finding out about the ‘Cars and Stars’ promotion should contact their local branch of GSF Car Parts for more information.