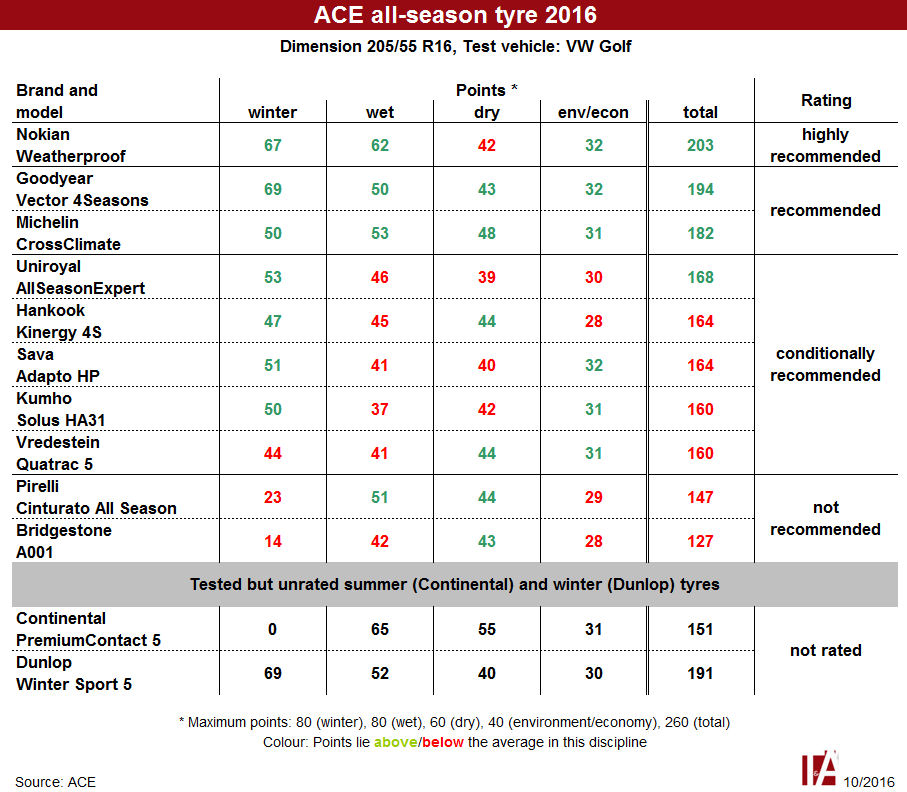 All-season tyres aren’t just growing in popularity in the UK – sales of year-round rubber are on the up in many European markets, and these products are increasingly the subject of comparative tyre tests. The latest is from Germany’s Autoclub Europa (ACE) and its Austrian partner the Auto, Motor und Radfahrerbund Österreichs (ARBÖ); this test evaluated the performance of ten size 250/55 R16 all-season tyres. The question the two motoring associations strove to answer was whether all-season tyres are true universal geniuses or merely winter tyres with summer characteristics.

The protagonists in the ACE/ ARBÖ test were the Bridgestone A001, Goodyear Vector 4Seasons, Hankook Kinergy 4S, Kumho Solus HA31, Michelin CrossClimate, Nokian Weatherproof, Pirelli Cinturato All Season, Sava Adapto HP, Uniroyal AllSeasonExpert and Vredestein Quatrac 5. The ten tyres were tested using a VW Golf, and as a reference Continental’s PremiumContact 5 summer tyre and the Dunlop Winter Sport 5 were put through their paces alongside the all-season products.

The ‘highly recommended’ test winner was the Nokian Weatherproof, which scored 203 from a possible maximum of 260 points. The strengths of the Nokian tyre, like those of the second-placed Goodyear Vector 4Seasons (194 points), primarily lie in handling and braking in the snow. Both tyres’ performance in the dry was less convincing, however – while the Golf came to a stop from 100 km/h in just 37.8 metres when fitted with Continental PremiumContact 5 summer tyres, one hundred to nought took 44.1 metres when wearing the Nokian tyres and 46.1 metres with the Goodyear rubber. The car stopped after 45.7 metres when fitted with the Dunlop winter tyres, placing its performance between the first and second-placed all-season tyres.

In the wet the all-season tyres behaved more like winter tyres than summer, with the Nokian stopping after 58.7 metres and the Goodyear after 58.9 metres. The distance for the Golf fitted with Continental summer tyres was 52.0 metres, and eight metres further when fitted with the Dunlop Winter Sport 5.

“Almost all the all-season tyres we tested are actually winter tyres in disguise,” commented ACE tyre tester Gunnar Beer. “They primarily offer safety reserves when it snows or on icy road surfaces. Many of all-season tyres can’t even keep pace with summer tyres in the rain, and in the dry they are – exactly as is the case for winter tyres – definitely the wrong choice.”

The sole exception to this rule amongst the tested tyres was the Michelin CrossClimate, which finished the test in third place. The CrossClimate led the all-season field in the dry and wet braking disciplines, however it was weaker in the snow.

Beer commented that he’s often asked whether an all-season tyre can keep pace with a winter tyre on snow and ice, and noted that the test results confirm that many now can. The question is whether these are the conditions that motorists will typically encounter, even in winter.