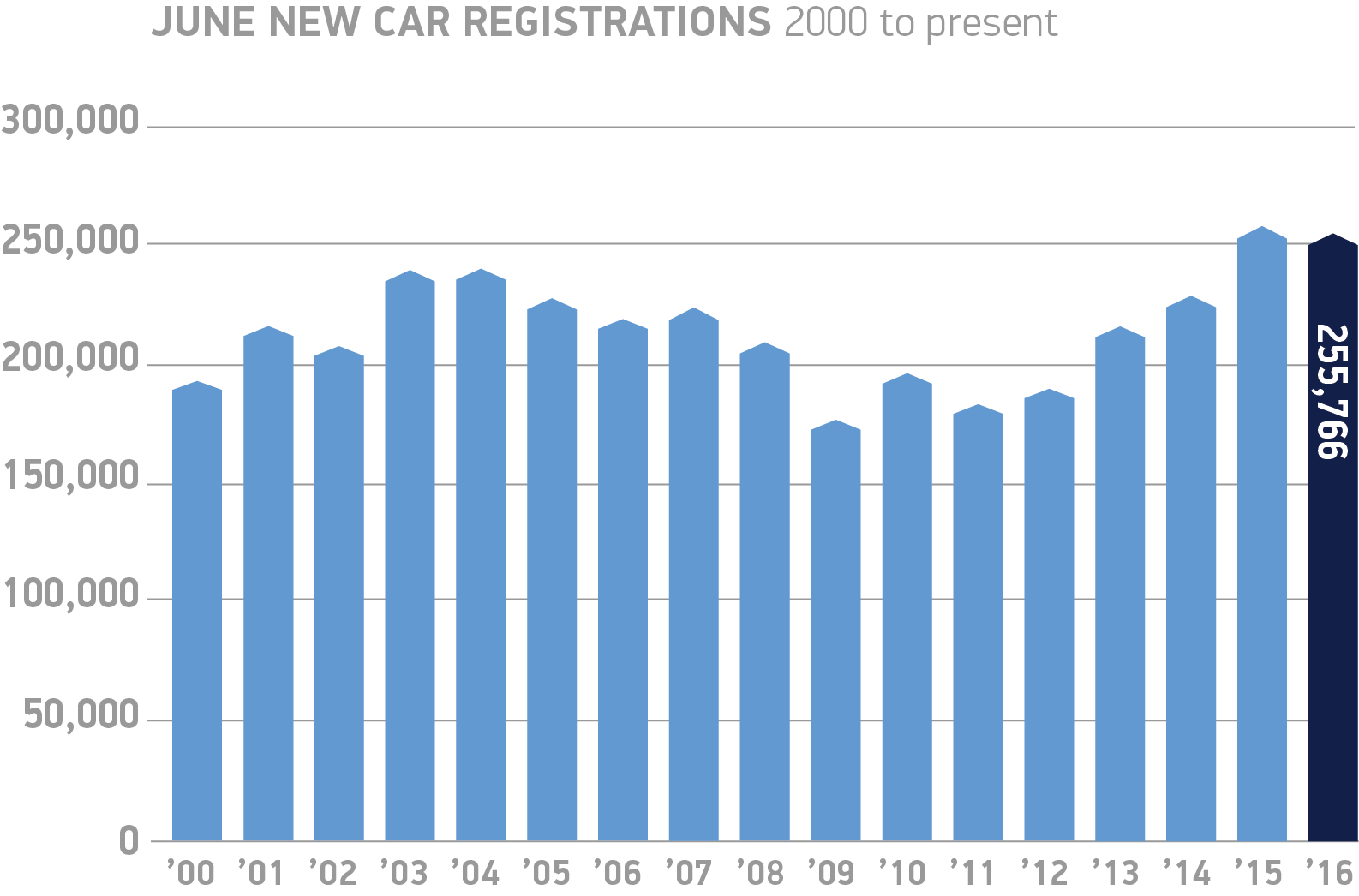 June’s figures represent a slight contraction in the market

The first six months of 2016 have seen new car registrations grow by 3.2 per cent in total, with 1,420,636 registered so far, according to figures released today by SMMT. This represents the best half-year performance ever recorded, though demand has levelled off in recent months, culminating in a slight fall (-0.8 per cent) in June 2016.

Growth was reported across all fuel types, with diesel and petrol registrations growing 2.3 per cent and 3.0 per cent respectively in the year-to-date. Alternatively fuelled vehicles (AFVs), meanwhile, continued the significant gains seen over previous months, up 21.3 per cent compared with the first six months of 2015. AFVs now account for 3.2 per cent of the overall new car market.

Demand in June eased slightly, with a -0.8 per cent fall in registrations, meeting expectations that market growth would stabilise following a record 2015. Fleet registrations continued the trend of recent months, driving the market with a 4.5 per cent rise and compensating for a -4.5 per cent drop in private registrations.

Mike Hawes, SMMT chief executive, said, “It is far too soon to determine whether the referendum result has had an impact on the new car market. The first six months saw strong demand at record levels but the market undoubtedly cooled over the second quarter. It’s important government takes every measure to restore business and economic confidence to avoid the market contracting in the coming months.” The bestselling new cars in the UK

John Leech, head of automotive for KPMG in the UK, commented that the half-year figures show that demand had softened prior to the EU referendum, though manufacturers are evaluating their position alongside falling consumer confidence since the result.

“UK new car sales were down 0.8% in June as consumer demand fell by 4.5%, although offset in part by a rise in fleet sales. This is the third month that consumer demand has softened and there are many who feel that the top of the market has been reached following 2015’s all-time record sales. Falling consumer confidence since the EU referendum is likely to further reduce sales in the coming months.

“Manufacturers are evaluating their positions carefully – although the industry is in good health and able to support the market, the decline in Sterling is widely forecast to persist for many months and therefore we can expect prices to rise and volume expectations to be tempered, particularly in the mass-market sector. However, personal contract purchase (PCP) car finance is continuing to underpin the market and should ensure the market does not sharply contract.

“Overall, we can expect the new car market to fall in the second half of 2016 by around 4%, leaving the full year at or around 2015 levels. It may also be that these changes prove positive for the used car market where supply had been catching up with demand.”