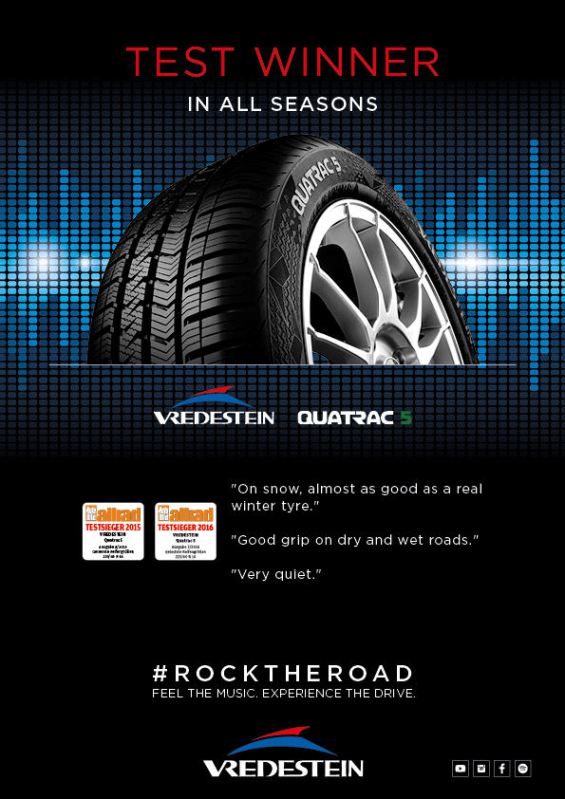 And the winner is...

The 7/2016 issue of German 4×4 and SUV magazine Auto Bild Allrad contains a test of seven size 215/60 R16H/V all-season SUV tyres. The tyres were fitted to a Skoda Yeti for evaluation purposes and rated for on-road performance in the snow, wet and dry as well as for environmental and comfort characteristics. Off-road performance was not tested.

While Auto Bild Allrad’s test team declined to award the top rating of “highly recommended” to any of the tested tyres, highest marks went to the Vredestein Quatrac 5, which received a “recommended” rating and was deemed the test winner. The second-placed Michelin CrossClimate also received this rating. Two tyres – the Falken Euro All Season AS 200 and the Goodyear Vector 4Seasons – gained a “good” rating, while the testers awarded a “satisfactory” rating to the Hankook Kinergy 4S. The bottom end of the table was occupied by a pair of tyres bearing the unenviable rating of “not recommended” – the second lowest scoring tyre was the Star Performer Winter AS, while Dunlop made a rare appearance in last place with the Grandtrek ST1 All Season.

Further test results can be found in the Tyrepress.com tyre test database.