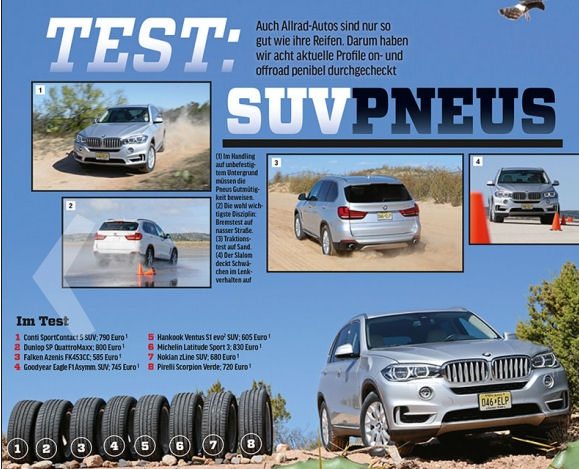 Autozeitung tested 8 tyres, but only 7 were included in the final results

It isn’t every day that a leading premium brand is handed the wooden spoon in a comparative tyre test, however Michelin is currently coming to terms with this tree-based utensil. The test in question appears in the current issue (12/16) of German magazine Autozeitung, and the tyre is the Michelin Latitude Sport 3. While the Michelin Rubber wasn’t found significantly lacking in any particular area and finished very close behind several other products, it was nevertheless trumped fair and square when results of the various performance, environmental and cost-related tests were tallied up.

The more mathematically-gifted reader will notice that only seven finishers have been mentioned in this test of eight tyres. The eighth, the Nokian zLine SUV, performed well enough in the 20 test criteria to earn itself the coveted third place, however limited retail availability at the time of testing meant it was impossible to crosscheck the Nokian test tyres against a set purchased by Autozeitung. For this reason, the publication decided not to include the zLine SUV in the final results. Bohnenkamp takes over Starco’s main aftermarket operation in “strategy of...