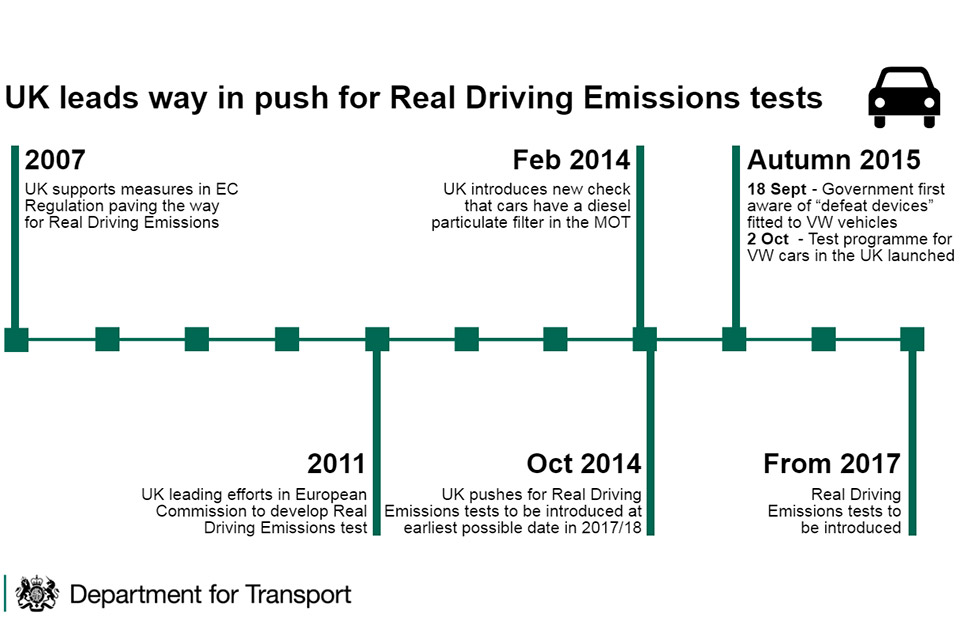 All 37 UK of the cars the government test in the wake of the automotive emissions scandal that began with VW last year exceed laboratory emissions standards in real-world conditions. However none of the vehicles tested in the UK programme showed evidence of defeat devices except VW models.

The UK government published its research into emissions levels from leading diesel car models, fulfilling a commitment to consumers to investigate potential manipulation of emission controls, on 21 April 2016 – just as leading car manufacturers (beginning with Mitsubishi) began making statements about their involvement in the emissions scandal.

A portable emissions measurement system (PEMS) was installed in test vehicles in order to record the data. The UK testing programme was carried out alongside an investigation by the German Ministry for Transport.

Tests were carried out on a total of 56 different vehicle types in Germany and 37 different vehicle types in the UK, over a period of 6 months. The Vehicle Certification Agency (VCA) on behalf of the Department for Transport (DfT) tested a representative selection of the UK’s top selling diesel vehicles. The findings provide a snapshot of exhaust emissions from those diesel models when tested in the laboratory, on a test track and during typical road use.

Real-world emissions tests to be introduced from 2017

Government representatives characterise their findings as another reason to reform the existing rules: “Existing lab tests designed to ensure emission limits are met have been shown to be inadequate and this is why the UK has secured a tough new Europe-wide ‘real driving emissions’ test. From next year, vehicles will have to meet emissions limits in real driving conditions across a wide range of typical operating temperatures. This will improve consumer confidence in manufacturers. The UK will be working to ensure that the new rules for real driving emissions and type approval are robust, deliver the expected outcomes and that manufacturers behave consistently.”

In May, the government will present newly published research to European Research for Mobile Emission Sources, the body responsible for collating vehicle emission data, to inform their updated emissions factors later this year. This will ensure EU-wide emission factors more accurately reflect the difference between real world driving and laboratory test conditions.

The Secretary of State for Transport, Rt Hon Patrick McLoughlin MP, said: “Our tests published today have not detected evidence of manipulation of emissions lab tests as used by the VW Group by any other car manufacturer.

“The tests do show the widespread use of engine management systems to prevent engine damage which can lead to higher emissions in real world temperature conditions cooler than those in the approved lab test.

“The UK has been leading in Europe in pushing for real world emissions tests which will address this problem. Real world tests will be introduced next year to reduce harmful emissions, improve air quality and give consumers confidence in the performance of their cars.

“Following the Volkswagen emissions scandal the whole of the automotive industry must work hard to restore public trust by being transparent about the systems they employ and advancing plans for introducing cleaner engine technology.”

As far as the tyre industry is concerned, the automotive industry working harder to restore public trust is likely to result in increased pressure on OE tyre suppliers to manufacturer products that reduce rolling resistance and therefore overall emissions.